What is "entropy and information gain"?

I am reading this book (NLTK) and it is confusing. Entropy is defined as:

How can I apply entropy and maximum entropy in terms of text mining? Can someone give me a easy, simple example (visual)?

I assume entropy was mentioned in the context of building decision trees.

To illustrate, imagine the task of learning to classify first-names into male/female groups. That is given a list of names each labeled with either m or f, we want to learn a model that fits the data and can be used to predict the gender of a new unseen first-name.

First step is deciding what features of the data are relevant to the target class we want to predict. Some example features include: first/last letter, length, number of vowels, does it end with a vowel, etc.. So after feature extraction, our data looks like:

The goal is to build a decision tree. An example of a tree would be:

basically each node represent a test performed on a single attribute, and we go left or right depending on the result of the test. We keep traversing the tree until we reach a leaf node which contains the class prediction (m or f)

So if we run the name Amro down this tree, we start by testing "is the length<7?" and the answer is yes, so we go down that branch. Following the branch, the next test "is the number of vowels<3?" again evaluates to true. This leads to a leaf node labeled m, and thus the prediction is male (which I happen to be, so the tree predicted the outcome correctly).

The decision tree is built in a top-down fashion, but the question is how do you choose which attribute to split at each node? The answer is find the feature that best splits the target class into the purest possible children nodes (ie: nodes that don't contain a mix of both male and female, rather pure nodes with only one class).

This measure of purity is called the information. It represents the expected amount of information that would be needed to specify whether a new instance (first-name) should be classified male or female, given the example that reached the node. We calculate it based on the number of male and female classes at the node.

Entropy on the other hand is a measure of impurity (the opposite). It is defined for a binary class with values a/b as:

This binary entropy function is depicted in the figure below (random variable can take one of two values). It reaches its maximum when the probability is p=1/2, meaning that p(X=a)=0.5 or similarlyp(X=b)=0.5 having a 50%/50% chance of being either a or b (uncertainty is at a maximum). The entropy function is at zero minimum when probability is p=1 or p=0 with complete certainty (p(X=a)=1 or p(X=a)=0 respectively, latter implies p(X=b)=1). 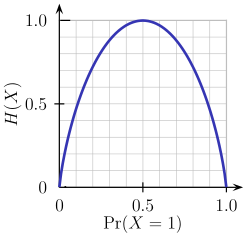 Of course the definition of entropy can be generalized for a discrete random variable X with N outcomes (not just two):

Back to our task of name classification, lets look at an example. Imagine at some point during the process of constructing the tree, we were considering the following split:

Next we compare it with the entropy computed after considering the split by looking at two child branches. In the left branch of ends-vowel=1, we have:

and the right branch of ends-vowel=0, we have:

We combine the left/right entropies using the number of instances down each branch as weight factor (7 instances went left, and 7 instances went right), and get the final entropy after the split:

Now by comparing the entropy before and after the split, we obtain a measure of information gain, or how much information we gained by doing the split using that particular feature:

You can interpret the above calculation as following: by doing the split with the end-vowels feature, we were able to reduce uncertainty in the sub-tree prediction outcome by a small amount of 0.1518 (measured in bits as units of information).

At each node of the tree, this calculation is performed for every feature, and the feature with the largest information gain is chosen for the split in a greedy manner (thus favoring features that produce pure splits with low uncertainty/entropy). This process is applied recursively from the root-node down, and stops when a leaf node contains instances all having the same class (no need to split it further).

Note that I skipped over some details which are beyond the scope of this post, including how to handle numeric features, missing values, overfitting and pruning trees, etc..

To begin with, it would be best to understand the measure of information.

How do we measure the information?

When something unlikely happens, we say it's a big news. Also, when we say something predictable, it's not really interesting. So to quantify this interesting-ness, the function should satisfy

One natural measure that satisfy the constraints is

where p is the probability of the event X. And the unit is in bit, the same bit computer uses. 0 or 1.

How much information can we get from one coin flip?

If the Sun rises tomorrow, p ~ 1 then it is 0 bit of information.

More formally, the entropy is the expected number of bits of an event.

I can't give you graphics, but maybe I can give a clear explanation.

Suppose we have an information channel, such as a light that flashes once every day either red or green. How much information does it convey? The first guess might be one bit per day. But what if we add blue, so that the sender has three options? We would like to have a measure of information that can handle things other than powers of two, but still be additive (the way that multiplying the number of possible messages by two adds one bit). We could do this by taking log2(number of possible messages), but it turns out there's a more general way.

Suppose we're back to red/green, but the red bulb has burned out (this is common knowledge) so that the lamp must always flash green. The channel is now useless, we know what the next flash will be so the flashes convey no information, no news. Now we repair the bulb but impose a rule that the red bulb may not flash twice in a row. When the lamp flashes red, we know what the next flash will be. If you try to send a bit stream by this channel, you'll find that you must encode it with more flashes than you have bits (50% more, in fact). And if you want to describe a sequence of flashes, you can do so with fewer bits. The same applies if each flash is independent (context-free), but green flashes are more common than red: the more skewed the probability the fewer bits you need to describe the sequence, and the less information it contains, all the way to the all-green, bulb-burnt-out limit.

It turns out there's a way to measure the amount of information in a signal, based on the the probabilities of the different symbols. If the probability of receiving symbol xi is pi, then consider the quantity

The smaller pi, the larger this value. If xi becomes twice as unlikely, this value increases by a fixed amount (log(2)). This should remind you of adding one bit to a message.

If we don't know what the symbol will be (but we know the probabilities) then we can calculate the average of this value, how much we will get, by summing over the different possibilities:

This is the information content, or entropy, of the message. It is maximal when the different symbols are equiprobable. If you're a physicist you use the natural log, if you're a computer scientist you use log2 and get bits.

I really recommend you read about Information Theory, bayesian methods and MaxEnt. The place to start is this (freely available online) book by David Mackay:

Those inference methods are really far more general than just text mining and I can't really devise how one would learn how to apply this to NLP without learning some of the general basics contained in this book or other introductory books on Machine Learning and MaxEnt bayesian methods.

The connection between entropy and probability theory to information processing and storing is really, really deep. To give a taste of it, there's a theorem due to Shannon that states that the maximum amount of information you can pass without error through a noisy communication channel is equal to the entropy of the noise process. There's also a theorem that connects how much you can compress a piece of data to occupy the minimum possible memory in your computer to the entropy of the process that generated the data.

I don't think it's really necessary that you go learning about all those theorems on communication theory, but it's not possible to learn this without learning the basics about what is entropy, how it's calculated, what is it's relationship with information and inference, etc...

entropy is lack of order of predicability

When I was implementing an algorithm to calculate the entropy of an image I found these links, see here and here.

This is the pseudo-code I used, you'll need to adapt it to work with text rather than images but the principles should be the same.

I got this code from somewhere, but I can't dig out the link.

As you are reading a book about NLTK it would be interesting you read about MaxEnt Classifier Module http://www.nltk.org/api/nltk.classify.html#module-nltk.classify.maxent

For text mining classification the steps could be: pre-processing (tokenization, steaming, feature selection with Information Gain ...), transformation to numeric (frequency or TF-IDF) (I think that this is the key step to understand when using text as input to a algorithm that only accept numeric) and then classify with MaxEnt, sure this is just an example.

Not the answer you're looking for? Browse other questions tagged math text computer-science nltk text-mining or ask your own question.

11
Decision Tree in Matlab
13
Information Gain and Entropy
4
pandas concat fill non aligned indices with NaN
3
Decision Tree - Can the Entropy of a Node be Zero?
3
Determine cluster similarity / set overlap
2
Optimal restricted permutation
2
How to calculate the information gain of a continuous feature
2
Information gain vs minimizing entropy
1
What feature selection algorithm would I use to find out which feature impacts each class the most?
0
What is the actual meaning implied by information gain in data mining?
See more linked questions

791
What is a lambda (function)?
1039
What is JavaScript's highest integer value that a number can go to without losing precision?
5159
What is a plain English explanation of "Big O" notation?
794
What are the lesser known but useful data structures?
603
What is polymorphism, what is it for, and how is it used?
1068
What is the difference between statically typed and dynamically typed languages?
1233
What are the differences between NP, NP-Complete and NP-Hard?
1
Mutual Information / Entropy Calculation Help
1214
Easy interview question got harder: given numbers 1..100, find the missing number(s) given exactly k are missing