What algorithm should I use to find the minimum flow on a digraph where there are lower bounds but not upper bounds on flow?

What algorithm should I use to find the minimum flow on a digraph where there are lower bounds, but not upper bounds on flow? Such as this simple example: 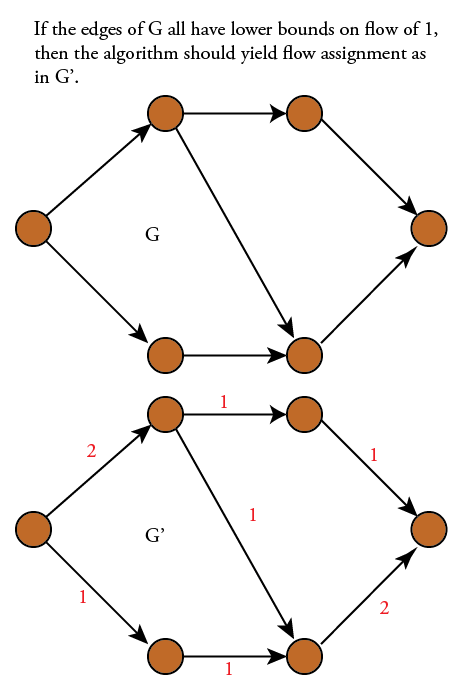 From my research it seems that the main way people deal with any kind of minimum cost of any kind of network is to set the problem up as a LP-type problem and solve that way. My intuition, however, is that not having upper bounds on flow ,i.e. having edges with infinite capacites, makes the problem easier, so I was wondering if there is an algorithm specifically targeting this case using more "graphy" techniques than the simplex method et. al.

I mean, if all the costs and lower bounds are 1 as in the above... we are then looking for a flow that covers all edges, obeys flow rules, and isn't pushing too much flow through any path from s to t. This just feels like it shouldn't require an LP solver to me and indeed the Wikipedia article on min cost flows states that "if the capacity constraint is removed, the problem is reduced to the shortest path problem" but I think they are talking about the case in which the lower bounds are all zero.

Also is there open source C/C++ code for minimum cost flow anywhere? From googling what is available I find that I can either set the problem up as an LP problem myself and solve with an open source LP solver, or I could use LEMON which provides several algorithms for min-cost flow. The boost graph library does not include an implementation as far as I can tell.

Is there anything else?

In the absence of upper-bounds, the easiest way -- easiest to implement, understand, and that is reasonably efficient -- to find the minimum flow of a graph is the following:

A version of the above can also be performed in the case in which the graph also has upper-bounds on flow. In that case step 1. is more complicated but can be solved by performing an initial max flow computation on a specially constructed graph.

Writing a solver is non-trivial.

See the LEMON library (part of COIN-OR). It has a number of highly optimized algorithms for the min cost flow problem. You can choose which algorithm works best on your data.

See http://lemon.cs.elte.hu/trac/lemon for information about LEMON.

Add all the "lower bounds" of the flows on each edge: any feasible solution will need that anyway.

For each node n in the topological order (i.e. following the edges) from the sink t, if the sum S- of what goes in the edge is greater that the sum S+ of what goes out, then add the flow S+ - S- on all edges of the shortest path between s and t (construct the list of shortest path while doing this for efficiency).

Then, you have a 'minimal' assigment (in the sense that it is needed in every feasible solution) such as S+ - S- is nonnegative at each node and the minimal capacity is satisfied on each edge.

The problem then reduce to a multiflow problem on the same graph structure:

Edit: for your problem, the graph looks like this

with minimal capacities 1 for each edge, and I suppose there is no minimal flow required at the sink t.

First assign 1 to each edge.

Now S+ - S- is non-negative for every node, and positive only for x1; the problem reduce to a multiflow problem (in that case it is a simple flow problem) where the requested flow is 1 at x1, and the source is still s.

Not the answer you're looking for? Browse other questions tagged c++ graph-algorithm linear-programming network-flow or ask your own question.

7
Increase flow by changing only one edge after Ford-Fulkerson
22
Why are back edges required in the Ford-Fulkerson algorithm?
1
Min-Cost Flow Integrality Theorem
3
Is there an algorithm to find minimum cut in undirected graph separating source and sink
6
Is minimum-cut same for the graph after increasing edge capacity by 1 for all edges?
6
Finding a Circulation in a Network with lower bounds