Fiddler not capturing traffic from browsers

I've been using Fiddler for quite a while, but all of a sudden it no longer captures internet traffic. I'm on Chrome 29 and Fiddler v4.4.5.1. I've checked all filters and rules and nothing is on. I've deleted my rules file, turned on and off capture traffic, and a few other things with no luck. I even uninstalled and re-installed Fiddler to see if that would help but to no avail.

I had the same problem, but it turned out to be a chrome extension called hola (or Proxy SwitchySharp), that messed with the proxy settings. Removing Hola fixed the problem

Not sure if this is relevant but I had the same problem with Fiddler after the last update (v2.4.5.0). I turned all filters off but still wasn't picking up any traffic. When I unchecked Use Filters on the filters tab, however, all traffic was picked up as normal. I'm still trying to figure out how I can use filters when just checking Use Filters box causes all traffic to be blocked.

If you find that steps #1 - #4 don't show anything, this means that Fiddler is unable to set your system proxy information; this might be caused by security or VPN software. (Group Policy can also prevent setting, but Fiddler will usually warn you if this is the case).

When Fiddler is capturing, click Tools > WinINET Options > LAN Settings and see whether the proxy is set properly (should point at 127.0.0.1:8888). If not, you might try running Fiddler elevated (as Administrator) to see if it makes a difference. It may be helpful to collect a trace using SysInternals' Process Monitor tool, filtered to Registry operations on the ProxyServer registry key.

If step #5 doesn't show anything, this means that you have a firewall or some other software interfering with connections to Fiddler.

I had the same issue with Firefox. The solution was to set the proxy settings to "system proxy settings". Fiddler can only capture traffic that goes through its proxy server. Capturing was stopped because a few days ago I was tinkering with the Firefox proxy settings for another project.

It follows that using Chrome you should also check the browser proxy settings in case of problems with capturing traffic with Fiddler.

Read more about this on the Fiddler site

I had the same issue and resolved it by running Fiddler with elevated privileges (aka, Run As Administrator)

I had exactly the same problem. I finally gave up. Reset Chrome's browser settings to default. Uninstalled then reinstalled Fiddler. After that, everything worked.

I had the same problem, when i disabled chrome extension called ZenMate Proxy extension that fixed the problem

I too faces similar problem, but once I did the below settings, everything was working fine(While working on other application, I selected 'No Proxy' setting in browser which I forgot to revert.Hence, got this problem)

Get back to me with any other problems 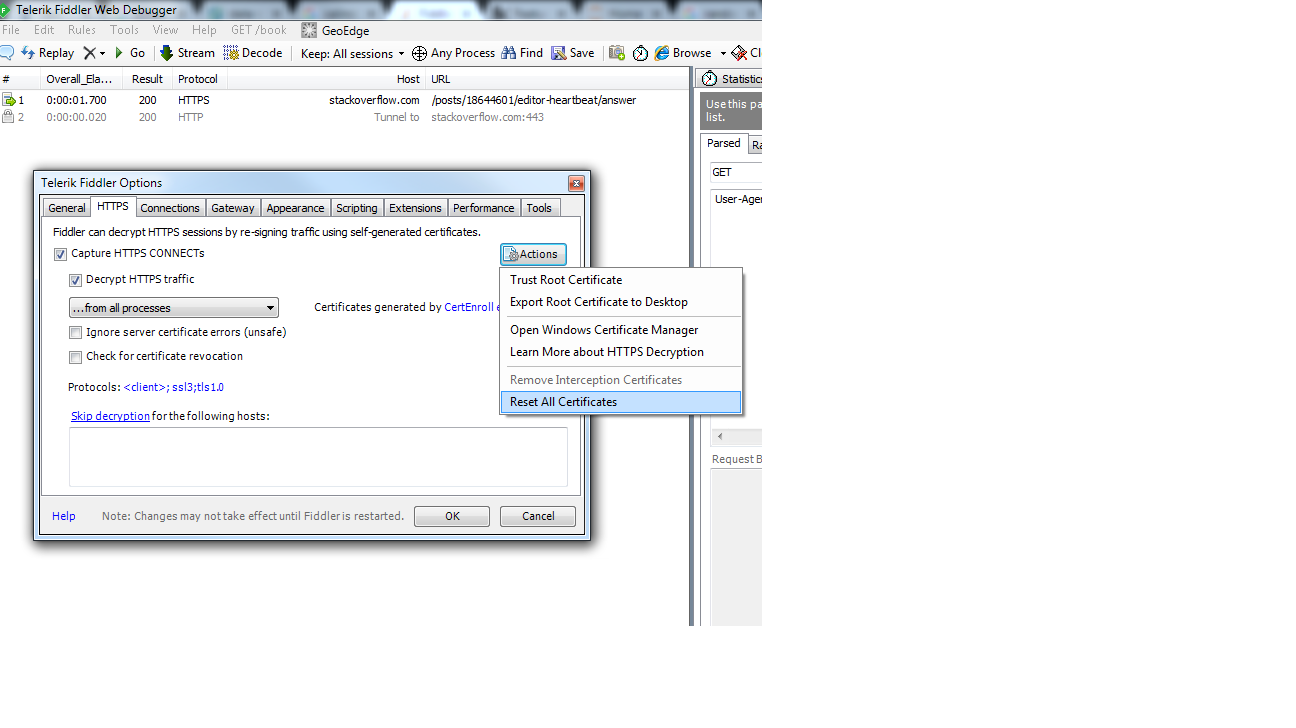 Once you do that, again check the check box(Decrypt HTTPS certificate)

I know this answer is really late, and probably not relevant to what the submitter had 3 years ago, but I found another possible reason why people may not get Fiddler to work, specifically in an Enterprise environment.

We are in the middle of releasing Fiddler. For my company, we are not allowed to download apps and install ourselves. We have to request IT to approve it and install it via ordering it from a software "Store" here at the company.

To get Fiddler to be available to "order" from that "store", we have to test on test machines. During testing, we could not get Fiddler to update the IE11 proxy settings. When I installed Fiddler myself, it would work, but when I had IT install it using the authorized install channels (what we were testing for), it would not work. Even when we try with users with Local Admin rights, and Run As Administrator, no luck.

At first we thought it was a Group Policy thing, but looking into it, it wasn't the case.

It turns out the IT people wrapped Fiddler in a VMWare ThinApp wrapper, an invisible VM sandbox to wrap the app inside of. I don't know what the benefits are of ThinApp, but it prevented Fiddler from being able to update the Proxy settings if IE11. When you enable capturing, and open WinINET options in Fiddler, it would show the Proxy settings updated. But when you opened IE11 Connection Settings, the proxy was not updated. Makes sense.

So the IT folks decided to release it as a "fat app" (that's what they called it) and now it works like a charm.

Just wanted to get this on the internet so that people are aware of it.

EDIT: I thought my issue was solved through the WinINET Options. Below are the steps that fixed my Chrome traffic finally being picked up in Fiddler:

However, what I just found out later was that the PAC script was resetting these options everytime I fired up Fiddler. The real solution was goto Fiddler -> Tools -> Options -> Connections -> Uncheck Use PAC Script. This solved it for good. Below is a screenshot for reference: 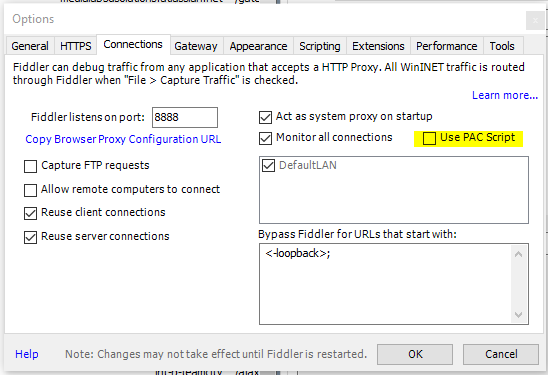 After hours of googling, reading, uninstalling, and facepalming! It turned out that a chrome extension for VPN was handling the proxy settings for Chrome!

Betternet to be more specific!

Disabling it, solved my problem.

"!WARNING Fiddler has detected that system or domain Group Policy has set ProxySettingsPerUser to 0. Unless Fiddler is run Elevated (e.g. Run As Administrator), it may not capture traffic from Internet Explorer and other programs. Current process IS running Elevated."

I'm in a huge corporate environment, with no connection to or info about group policy changes; it apparently just got applied one day. Thanks, bureaucracy :)

Anyway, that led me to messing around with IE proxy settings. Changing it from Automatic to 127.0.0.1 on port 8888 (the default configured port in Fiddler) worked. Kind of a pain, though, because I have to set it each time to override the group policy setting. And then I get cert errors, which is a known thing because Fiddler uses it's own, untrusted cert . . . and the beat goes on . . .

For me i tried everything on here and eventually it boiled down to a corporate proxy that kept on resetting the INET Settings.

I worked my way down the list of suggestions but in the end turned out to be the proxy settings. I had hunch about it but i wanted to be thorogh about it before going to 'IT' and saying can i have local bindows proxy settings override please?

I asked for the proxy management software to be removed and then within a second fiddler started working. If you cannot override the proxy settings in Internet Properties then fiddler will never work.

Russian, this info for you! Fiddler didn't capture Chrome traffic because I had installed Antizapret Chrome addon for access blocked by Russian government sites. I removed it and now all works.

Here is my solution if you don't mind losing your Fiddler configuration.

To solve this, I had to delete manually the folder ../Documents/Fiddler2 which for whatever reason was not getting removed even after uninstalling and then reinstalling Fiddler. I'm on Fiddler 5.0, build from 03 November 2020.

As Thomas Glick said, the latests versions of Fiddler2 works ok with all major browsers. But beware, there's a "Show only Internet Explorer traffic filter" in the filters sections, just disable that one and everything should work as expected, including other filters.

Another possible issue is related to WCF client (this may also include other clients but i'm not sure). The client can be configured not to use the machine default proxy, which makes the client/application bypass Fiddler capture.

For further reading: What is the purpose of usedefaultwebproxy in WCF.

I had the same problem with a Chrome extension called GeoProxy - even though proxy was disabled, it still took the traffic away and stopped fiddler from seeing it. Disabling the extension resolved the issue. I'm guessing this will be an issue with any proxy extension.

(This was meant just as a comment for Claus' response above, which set me on the right path - but apparently I have enough reputation to answer, but not to comment...)

Make sure you have Capture Traffic enabled by making sure it's checked under File.

It's sadly too easy to press F12 by mistake with Fiddler focused and disable the whole thing.

I've had the same problem. The solution was to remove proxy from Chrome settings. Also you could have an extension that use proxy. Try to disable it.

Not the answer you're looking for? Browse other questions tagged fiddler or ask your own question.

222
Filter Fiddler traffic
3
What is the purpose of usedefaultwebproxy in WCF?
2
Fiddler Echo Service error while accessing localhost in my chrome browser
1
Fiddler suddenly cannot capture anything from broswers