How can I set a landscape layout just for tablets? 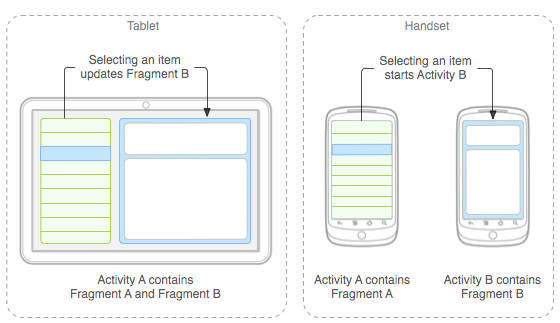 However, when I rotate a device with a small screen, it's going to use the portrait layout, but as the screen is so small, its not optimal and it doesn't look good as the two fragments layout is mainly focused for atleast 600dp tablets.

So the question is, Is there any way I can use a qualifier to set a Landscape layout for smallest width higher than 600?

I've been checking the docs http://developer.android.com/guide/practices/screens_support.html but it doesn't seem to be able to combine smallest width & orientation.

Put the tablet layout in your res/layout-w600dp or whatever smallest width you want to support for the two pane layout.

I think what you really want is to declare a folder...

this will be invoked only if your tablet or w600dp device is in landscape mode. Basically you can combine qualifiers w600dp with land.

You could just ignore the -port qualifier. Generally if the device has 600dp (or whatever number you choose), you could show the two-pane layout. Does it really matter if it is in landscape mode or portrait if there is enough space on the screen?

So in general you can put your layout for small screens in the layout folder and use layout-sw600dp for the larger layout.

Not the answer you're looking for? Browse other questions tagged android android-layout layout or ask your own question.

974
How to Disable landscape mode in Android?
726
Can I underline text in an Android layout?
23
Portrait for phone, landscape for Tablet (Android-Layout)
0
Landscape And Portrait Mode Layout Problems
0
tablet/handset layout structure with fragments
2
landscape layout does not change on orientation change and portain layout does not change in orientation change
0
Android: How to set different layout for different orientation?
0
What type of qualifier do we use to ensure users could only use landscape mode on a tablet?
8
Disable landscape orientation for phones but allow for tablets