A .NET 3.5 solution ended up with this warning when compiling with msbuild.

Sometimes NDepend might help out but in this case it didn't give any further details. Like Bob I ended up having to resort to opening each assembly in ILDASM until I found the one that was referencing an older version of the dependant assembly.

Is there a better (more automated) approach?

Change the "MSBuild project build output verbosity" to "Detailed" or above. To do this, follow these steps:

Check out the MSBuild messages. The ResolveAssemblyReferences task, which is the task from which MSB3247 originates, should help you debug this particular issue.

You do not have to open each assembly to determine the versions of referenced assemblies.

This is a much quicker way to get to the bottom of the warning MSB3247, than to depend on the MSBuild output.

Sometime @AMissico answer is not enough. In my case, I couldn't find the error in the Output windows so I decided to create a log file and analyze it, by doing the following steps:

I found that (at least in Visual Studio 2010) you need to set the output verbosity to at least Detailed to be able to spot the problem.

It might be that my problem was a reference that was previously a GAC reference, but that was no longer the case after my machine's reinstall.

I had the same error and could not figure it out with the other answers. I found that we can "Consolidate" NuGet packages.

In, any cast this Warning can be eliminated by manually editing the .csproj file for your project.

Use a dependency reader

Using dep.exe you can list out all the nested dependencies of an entire folder. Combined with unix tools like grep or awk, it can help you to solve your problem

Finding assemblies being referenced in more than one version

This obscure command line runs dep.exe then pipes the output twice to awk to

Understanding how this assembly got pulled in your bin

In this example, the tool would show you that System.Web.Http 5.2.3 comes from your dependency to FooLib whereas the version 4.0.0 comes from BarLib.

Then you have the choice between

How to run these thing in Windows

If you don't have a unix type shell you'll need to download one before being able to run awkand grep. Try one of the following

I had this problem too and used AMissico's advice too discover the problem (Although had to set verbosity level to Detailed.

The problem was actually quite straight forward though after finding the culprit.

Background: I upgraded my project from VS2008 to VS2010. In VS2008 the target framework was 3.5 and when I brought it into VS2010 I switched it to 4 (Full). I also upgraded some third party components including Crystal reports.

It turned out most of System references where pointing at version 4.0.0.0 but a couple had not been automatically changed (System and System.Web.Services) and were still looking at 2.0.0.0. Crystal reports is referencing 4.0.0.0 and so this was where the conflicts were occuring. Simply putting the cursor at the first System library in the solution explorer, cursor down the list and looking for any references to 2.0.0.0, removing and re-adding newer 4.0.0.0 version did the trick.

The strange this was that most of the references had been correctly updated and if it weren't for Crystal reports, I probably would never had noticed...

My app is a WPF app with GUI and can be download from my home webserver: AsmSpyPlus.exe.

Code is available at: GitHub 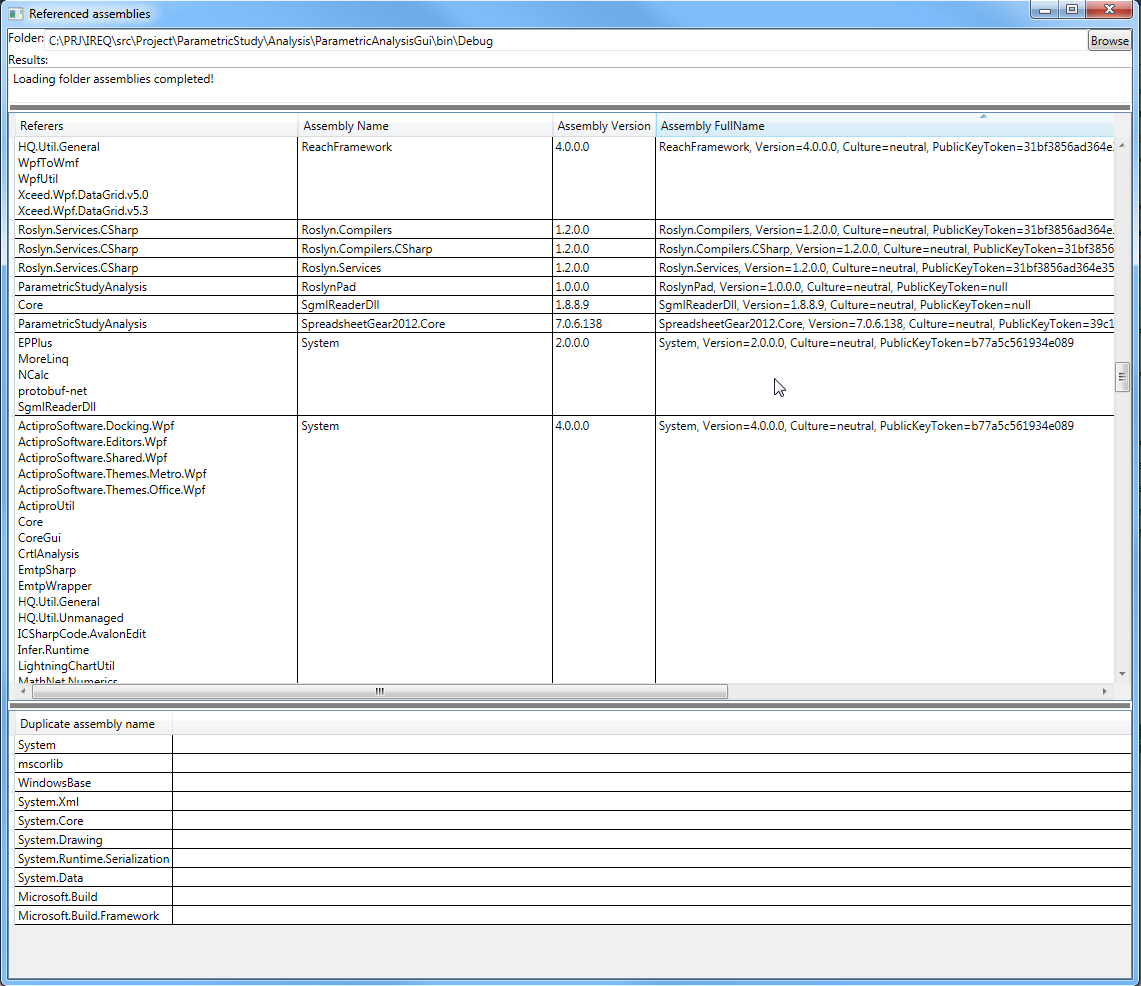 As mentioned here, you need to remove the unused references and the warnings will go.

ASP.NET build manager is building the website by going through the folders alphabetically, and for each folder it figures out it dependencies and builds the dependencies first and then the selected folder.

In this case the problematic folder which is ~/Controls, is selected to be built at the beginning, from yet an unknown reason, it builds some of the controls there as a separate assembly instead of inside the same assembly as other controls (seems to be connected to the fact that some controls are dependent on other controls in the same folder).

So at this point 2 assembly (at least) have the same controls and the build fails.

Although we still don't know why this happened, we were able to work around it by changing the Controls folder name to ZControls, this way it is not built before ~/File-Center/Control, only after and this way it is built as it should.

Tip: use MSBuild Binary and Structured Log Viewer and only generate binding redirects for the conflicts in the project that emits the warning (that is, only past those there was a conflict lines to the input text file for the code above [AssemblyConflicts.txt]).

A simplest way without without one taking into account of (internal) dependencies :

In my case, there was a problem with MySQL reference. Somehow, I could list three versions of it under the list of all available references. I followed process 1 through 6 above and it worked for me.

As AMissico's answer requires changing the log level, and neither ASMSpy nor ASMSpyPlus are available as a cross-platform solution, here is a short addition for Visual Studio for Mac:

If you have resharper, remove all unused reference on your solution.

Not the answer you're looking for? Browse other questions tagged .net msbuild clr ndepend or ask your own question.