How can I prevent a specific plot to be shown in Jupyter notebook? I have several plots in a notebook but I want a subset of them to be saved to a file and not shown on the notebook as this slows considerably.

A minimal working example for a Jupyter notebook is:

As you can see I have two types of plots, a and b. I want a's to be plotted and shown and I don't want the b plots to be shown, I just want them them to be saved in a file. Hopefully this will speed things a bit and won't pollute my notebook with figures I don't need to see.

Thank you for your time

will not plot the output in inline mode. I can't work out if is really clearing the data though.

This might be usefull in cases all other methods shown here fail.

From IPython 6.0 on, there is another option to turn the inline output off (temporarily or persistently). This has been introduced in this pull request.

You would use the "agg" backend to not show any inline output.

It seems though that if you had activated the inline backend first, this needs to be called twice to take effect.

Here is how it would look in action 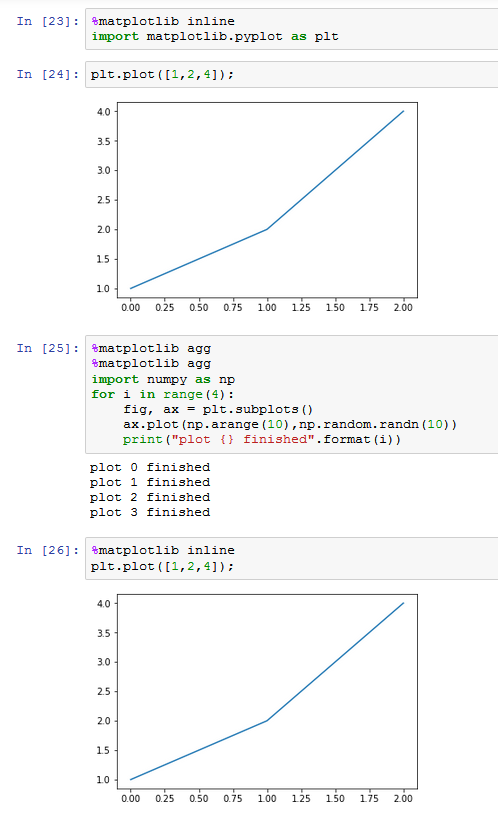 I'm a beginner though,off the inline mode when you don't want to see the output in your notebook by:

to use it back:

more better solution would be to use:

which says inline mode off.

On Jupyter 6.0, I use the following snippet to selectively not display the matplot lib figures.

Building off @importanceofbeingernest's answer, one may call some function in a loop, and at each iteration, want to render a plot. However, between the each plot, you may want to render additional stuff.

Not the answer you're looking for? Browse other questions tagged python matplotlib jupyter-notebook ipython-notebook figures or ask your own question.

0
Save seaborn plot but not showing it
0
Can you turn off the automatic display of seaborn Heatmaps?
12
How do I show the same matplotlib figure several times in a single IPython notebook?
7
Plot an IPython Notebook figure inline with fig.show()?
4
Showing seaborn plot from dictionary
5
How to suppress matplotlib inline for a single cell in Jupyter Notebooks/Lab?
2
How to not show graphs until plt.show() in jupyter notebook or jupyter_lab
2
How to prevent matplotlib from to showing a figure even with plt.close() in jupyter notebook
1
How to Successfully Produce Mosaic Plots in Pyviz Panel Apps?
0
Can I prevent Spyder from displaying inline images temporarily?
See more linked questions

3001
List changes unexpectedly after assignment. Why is this and how can I prevent it?
140
Saving interactive Matplotlib figures
1311
How to put the legend out of the plot
1455
Save plot to image file instead of displaying it using Matplotlib
148
How can I open the interactive matplotlib window in IPython notebook?
2868
How do I select rows from a DataFrame based on column values?
910
How to make IPython notebook matplotlib plot inline
493
Conda environments not showing up in Jupyter Notebook
44
Jupyter Notebook: interactive plot with widgets
5
Showing and saving PGF plots from Jupyter Notebook