The other answerers are all correct, but a friend asked me to explain this to him and what it really boils down to is how Ruby handles variables, so I thought I would share some simple pictures / explanations I wrote for him (apologies for the length and probably some oversimplification):

Q1: What happens when you assign a new variable str to a value of 'foo'?

A: A label called str is created that points at the object 'foo', which for the state of this Ruby interpreter happens to be at memory location 2000.

Q2: What happens when you assign the existing variable str to a new object using =? 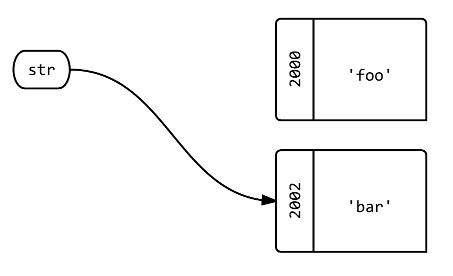 A: The label str now points to a different object.

Q3: What happens when you assign a new variable = to str? 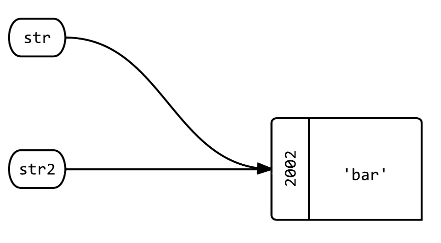 A: A new label called str2 is created that points at the same object as str.

Q4: What happens if the object referenced by str and str2 gets changed? 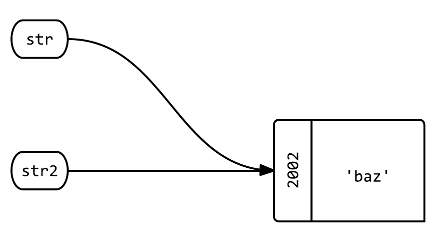 A: Both labels still point at the same object, but that object itself has mutated (its contents have changed to be something else).

How does this relate to the original question?

It's basically the same as what happens in Q3/Q4; the method gets its own private copy of the variable / label (str2) that gets passed in to it (str). It can't change which object the label str points to, but it can change the contents of the object that they both reference to contain else:

In traditional terminology, Ruby is strictly pass-by-value. But that's not really what you're asking here.

Ruby doesn't have any concept of a pure, non-reference value, so you certainly can't pass one to a method. Variables are always references to objects. In order to get an object that won't change out from under you, you need to dup or clone the object you're passed, thus giving an object that nobody else has a reference to. (Even this isn't bulletproof, though — both of the standard cloning methods do a shallow copy, so the instance variables of the clone still point to the same objects that the originals did. If the objects referenced by the ivars mutate, that will still show up in the copy, since it's referencing the same objects.)

To say Ruby uses "pass by value" or "pass by reference" isn't really descriptive enough to be helpful. I think as most people know it these days, that terminology ("value" vs "reference") comes from C++.

In C++, "pass by value" means the function gets a copy of the variable and any changes to the copy don't change the original. That's true for objects too. If you pass an object variable by value then the whole object (including all of its members) get copied and any changes to the members don't change those members on the original object. (It's different if you pass a pointer by value but Ruby doesn't have pointers anyway, AFAIK.)

In Ruby, "pass by object reference" (to use Python's terminology) is used:

Therefore Ruby does not use "pass by reference" in the C++ sense. If it did, then assigning a new object to a variable inside a function would cause the old object to be forgotten after the function returned.

* This is why, in Ruby, if you want to modify an object inside a function but forget those changes when the function returns, then you must explicitly make a copy of the object before making your temporary changes to the copy.

Ruby is pass-by-value. Always. No exceptions. No ifs. No buts.

Ruby is pass-by-value in a strict sense, BUT the values are references.

This could be called "pass-reference-by-value". This article has the best explanation I have read: http://robertheaton.com/2014/07/22/is-ruby-pass-by-reference-or-pass-by-value/

Pass-reference-by-value could briefly be explained as follows:

A function receives a reference to (and will access) the same object in memory as used by the caller. However, it does not receive the box that the caller is storing this object in; as in pass-value-by-value, the function provides its own box and creates a new variable for itself.

The resulting behavior is actually a combination of the classical definitions of pass-by-reference and pass-by-value.

There are already some great answers, but I want to post the definition of a pair of authorities on the subject, but also hoping someone might explain what said authorities Matz (creator of Ruby) and David Flanagan meant in their excellent O'Reilly book, The Ruby Programming Language.

Because object references are passed to methods, methods can use those references to modify the underlying object. These modifications are then visible when the method returns.

This all makes sense to me until that last paragraph, and especially that last sentence. This is at best misleading, and at worse confounding. How, in any way, could modifications to that passed-by-value reference change the underlying object?

Ruby is pass-by-reference. Always. No exceptions. No ifs. No buts.

=> some people don't realize it's reference because local assignment can take precedence, but it's clearly pass-by-reference

but doing this won't give error:--

Here identifier a returns value object 11 whose object id is 23 i.e. object_id 23 is at identifier a, Now we see an example by using method.

arg in foo is assigned with return value of x. It clearly shows that argument is passed by value 11, and value 11 being itself an object has unique object id 23.

Hence, Ruby is pass by value and Ruby variables do not contain values but do contain reference to value object.

Ruby is interpreted. Variables are references to data, but not the data itself. This facilitates using the same variable for data of different types.

Assignment of lhs = rhs then copies the reference on the rhs, not the data. This differs in other languages, such as C, where assignment does a data copy to lhs from rhs.

So for the function call, the variable passed, say x, is indeed copied into a local variable in the function, but x is a reference. There will then be two copies of the reference, both referencing the same data. One will be in the caller, one in the function.

In contrast, using the .replace method on x will cause ruby to do a data copy. If replace is used before any new assignments then indeed the caller will see the data change in its version also.

To be consistent with definitions we must keep with '.replace' as it is a data copy. From the perspective of '.replace' we see that this is indeed pass by reference. Furthermore, if we walk through in the debugger, we see references being passed in, as variables are references.

However if we must keep '=' as a frame of reference, then indeed we do get to see the passed in data up until an assignment, and then we don't get to see it anymore after assignment while the caller's data remains unchanged. At a behavioral level this is pass by value as long as we don't consider the passed in value to be composite - as we won't be able to keep part of it while changing the other part in a single assignment (as that assignment changes the reference and the original goes out of scope). There will also be a wart, in that instance variables in objects will be references, as are all variables. Hence we will be forced to talk about passing 'references by value' and have to use related locutions.

It should be noted that you do not have to even use the "replace" method to change the value original value. If you assign one of the hash values for a hash, you are changing the original value.

Any updates in the same object won't make the references to new memory since it still is in same memory. Here are few examples :

Ruby passes a reference to an object and since everything in ruby is an object, then you could say it's pass by reference.

I don't agree with the postings here claiming it's pass by value, that seems like pedantic, symantic games to me.

However, in effect it "hides" the behaviour because most of the operations ruby provides "out of the box" - for example string operations, produce a copy of the object:

This means that much of the time, the original object is left unchanged giving the appearance that ruby is "pass by value".

Of course when designing your own classes, an understanding of the details of this behaviour is important for both functional behaviour, memory efficiency and performance.

Lots of great answers diving into the theory of how Ruby's "pass-reference-by-value" works. But I learn and understand everything much better by example. Hopefully, this will be helpful.

As you can see when we entered the method, our bar was still pointing to the string "value". But then we assigned a string object "reference" to bar, which has a new object_id. In this case bar inside of foo, has a different scope, and whatever we passed inside the method, is no longer accessed by bar as we re-assigned it and point it to a new place in memory that holds String "reference".

Now consider this same method. The only difference is what with do inside the method

Notice the difference? What we did here was: we modified the contents of the String object, that variable was pointing to. The scope of bar is still different inside of the method.

So be careful how you treat the variable passed into methods. And if you modify passed-in variables-in-place (gsub!, replace, etc), then indicate so in the name of the method with a bang !, like so "def foo!"

It's important to keep in mind that the "bar"s inside and outside of foo, are "different" "bar". Their scope is different. Inside the method, you could rename "bar" to "club" and the result would be the same.

I often see variables re-used inside and outside of methods, and while it's fine, it takes away from the readability of the code and is a code smell IMHO. I highly recommend not to do what I did in my example above :) and rather do this

Not the answer you're looking for? Browse other questions tagged ruby-on-rails ruby pass-by-reference or ask your own question.

17
Ruby - Parameters by reference or by value?
4
Is Ruby pass-by-value or pass-by-reference?
3
Ruby 'pass by value' clarification
4
Flattening an array recursively in Ruby
0
What does pass by value mean in Ruby?
0
Ruby: array is being passed by reference into function?
0
If everything is an object, why can't I swap two variables?
0
What memory is created/referenced when when an object is passed to a method?
0
Does Ruby not create a duplicate variable a of b, when a = b?
0
Pass by reference or pass by copy - Ruby Modules
See more linked questions

1181
How to call shell commands from Ruby
7190
Is Java "pass-by-reference" or "pass-by-value"?
1558
Is JavaScript a pass-by-reference or pass-by-value language?
1175
How to understand nil vs. empty vs. blank in Ruby
2188
How to write a switch statement in Ruby
2956
How do I pass a variable by reference?
1414
How to check if a value exists in an array in Ruby
1519
Rails: How can I rename a database column in a Ruby on Rails migration?
1094
How do I get the current absolute URL in Ruby on Rails?
1083
What is attr_accessor in Ruby?