Use Ctrl+/ as shortcut in Delphi program

Is this even possible? Notepad++ for example does it, but simply trying to assign it to components like actions or menu items doesn't work. The event it is assigned to simply doesn't trigger.

So, I took my question to Google. Nada. Then, I tried stepping through the various shortcut functions, in this case TextToShortCut and ShortCutToText.

The first one, TextToShortCut, converts stuff like 'Ctrl+A' (a string) to the following 16bit value:

Works fine, mostly. However, I observed the following weirdness:

What's going on here? For now, I believe the error lies in the final part of TextToShortCut: after handling the part before the + sign ("Ctrl" in this case), it will try to find a shortcut for the remaining part ("/"). However, in its current form the part after + must be a valid shortcut on its own too.

Is this some VCL bug or am I missing something?

Here's a proof of concept (yes, I'm taking screenshots of code, but mashing this together with the Component Palette is faster than using this code directly): 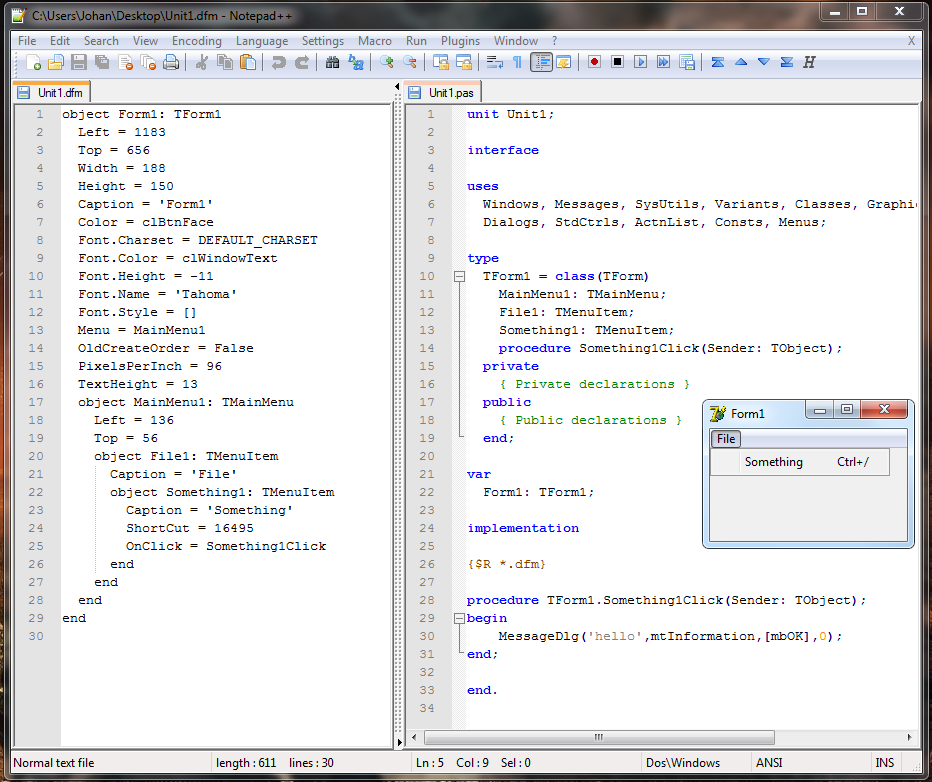 Manually assigning 16431 to the menu item does not work.

If you assign an OnShortCut event handler to your menu's parent TForm, you will see that pressing Ctrl+/ results in a TShortCut value of 16575 from Menus.ShortCutFromMessage(), which is the function that the VCL uses internally when dispatching keystrokes for shortcut handling.

Both shortcuts have the scCtrl flag present.

When dispatching a shortcut, the VCL does exact comparisons of TShortCut values. So when you have 16495 assigned as your shortcut, it will not trigger because the system is reporting a shortcut of 16575 instead, even though they both map to Ctrl+/.

When I assign 16575 to the ShortCut property of a TMenuItem or TAction, pressing Ctrl+/ triggers the item, as expected.

So the trick is that the system is reporting a shortcut that uses the VK_OEM_2 virtual key for /, but you are expecting it to use the VK_DIVIDE virtual key instead.

It is not possible to create a single shortcut which responds to both.

But instead of setting the shortcut on the memu item, you could attach an action which has a SecondaryShortCuts property. Then use:

Not the answer you're looking for? Browse other questions tagged delphi delphi-7 shortcut or ask your own question.