ExtJS has a very useful layout mechanism called flex. It works by summing all the things on a row or in a column. Then the space is parceled out using the flex value divided by the sum of all the flex values. This results in a layout like below: 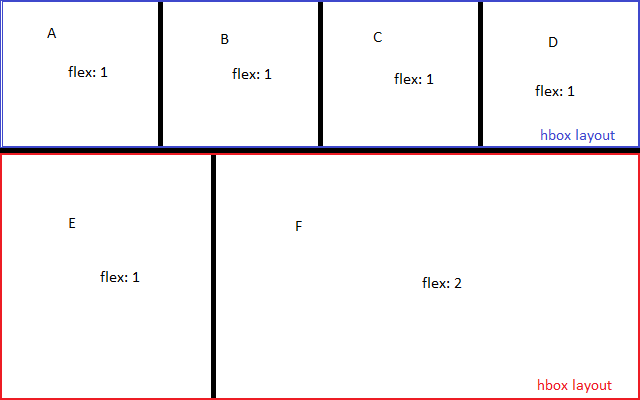 The Red box is an hbox layout, the blocks E and F have the given flex values that sum up to 3, so E gets 1/3 the width of the screen, and F gets 2/3rds.

The Blue box is another hbox layout, where all 4 pieces (A-D) have the same flex so each one gets 25% of the space.

Is there anything like this kind of layout in Angular? If there isn't, how would you put this together in Angular?

Additional information based on some of the answers below:

I want to be able to replace extjs with Angular. To do that I need some functionality that I have in extjs that I don't know exists in Angular. I've found ways to watch for screen size, change to adjust the overall display size, but I haven't seen a good example yet of a directive that essentially introspects its constituent directives for this flex value and sets their size based on a size change event of the container. Flex doesn't work from inside the divs, it works inside the container of the divs, because it has to go across all the divs in the container to divide the space correctly. I haven't seen an angular directive that does this yet.

I have no actual development experience with Angular yet (I've watched many of the videos from http://egghead.io, I've read documentation and tutorials, listened to this podcast: JSJ-Angular) and so I don't know if this is something that is easy to solve, or hard to solve, or if someone has already solved it. This flex layout is wickedly cool and easy to use, in fact for full page apps, I'm not sure there is an easier way to lay them out so that they stay full screen and are malleable to screen size changes. Grid systems are great for some things, but they don't address what the flex system addresses.

I'm trying to see if there is a way to leap from extjs to Angular without really making my life difficult.

Looks like flex is becoming a display type now in the form of the CSS display: flex or display: inline-flex (with prefixes at the moment)

Interesting to see the illustration calls it the Holy Grail Layout example. Of course IE won't implement it right, or in a timely fashion, but my customers don't mind using Chrome if it gets the job done.

Turns out someone has create one and it does MOST of what I was looking for.

You missing the point. Angular is only JS library that helps you with:

It doesn't describe style of your site. You have to do it by yourself or use one of popular fluid/responsive CSS frameworks, i.e.:

Just choose yourself and then apply to your site. Using that also make your design independent from JS (which is very bad) and JS framework (which is 9th circle of hell).

Not the answer you're looking for? Browse other questions tagged angularjs extjs or ask your own question.

0
Why do these inline-block divs not fit inside their container?

1
Extjs Grid Width Calculated Wrong
6
Angular Material: layout-fill not filling parent <div>
0
Adding padding to elements in layout 'fit' adds empty space on top
1
Custom Angular directive to dynamically change font size?
13
Dynamic Edit form for some kind of Russian Dolls container(s) with AngularJS
0
Angular 2 : Error with directives and routes
1
In ExtJs 6.2, a column that contains an item does not take into account its flex property, is there a workaround?
0
How to create multiple re-sizable sibling div elements that are constrained in by a container div