How to add spacing between columns?

I have two columns:

How can I add a space between them?

The output would simply be two columns right next to each other taking up the whole width of the page. Say the width was set to 1000px then each div would be 500px wide.

If I wanted a 100px space between the two how could I achieve this automatically with Bootstrap: the divs sizes would become 450px each to compensate for the spacing.

I was facing the same issue; and the following worked well for me.

This will automatically render some space between the 2 divs. 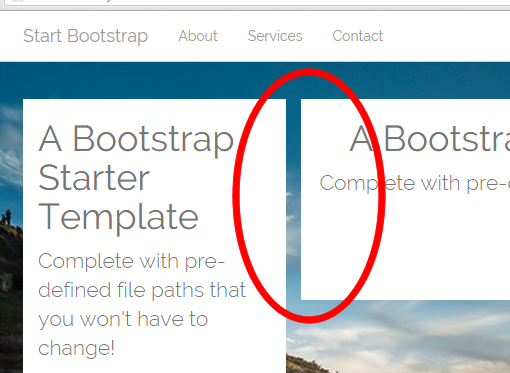 You can achieve spacing between columns using the col-md-offset-* classes, documented here. The spacing is consistent so that all of your columns line up correctly. To get even spacing and column size I would do the following:

I know I'm late to the party, but you could try spacing the boxes with padding.

Have a go at it

you can use background-clip and box-model with border proprety

I have had similar issues with space between columns. The root problem is that columns in bootstrap 3 and 4 use padding instead of margin. So background colors for two adjacent columns touch each other.

I found a solution that fit our problem and will most likely work for most people trying to space columns and maintain the same gutter widths as the rest of the grid system.

This was the end result we were going for

Having the gap with a drop shadow between columns was problematic. We did not want extra space between columns. We just wanted the gutters to be "transparent" so the background color of the site would appear between two white columns.

this is the markup for the two columns

This approach does require an inner div with negative margins just like the "row" class bootstrap uses. And this div, we called it "raised-block", must be the direct sibling of a column

This way you still get proper padding inside your columns. I have seen solutions that appear to work by creating space, but unfortunately the columns they create have extra padding on either side of the row so it ends up making the row thinner that the grid layout was designed for. If you look at the image for the desired look, this would mean the two columns together would be smaller than the one larger one on top which breaks the natural structure of the grid.

The major drawback to this approach is that it requires extra markup wrapping the content of each columns. For us this works because only specific columns needed space between them to achieve the desired look.

According to Bootstrap 4 documentation you should give the parent a negative margin mx-n*, and the children a positive padding px-*

This will allow a space between the two columns and obviously if you want to change the default width you can go for mixins to modify the default bootstrap width. Or, you can give the width using the inline CSS style.

You can achieve spacing between columns using the col-xs-* classes,within in a col-xs-* div coded below. The spacing is consistent so that all of your columns line up correctly. To get even spacing and column size I would do the following:

Since you're using bootstrap, I guess you want to make the thing responsive. In that case you should'n use fixed sizes, in 'px' for example.

As a workaround to other solutions, I propose make both columns "col-md-5" instead of "col-md-6", and then in the parent element "row" that contains the columns, add the class "justify-content-between", which puts the free space in the middle, as you can check in the bootstrap doc here

Inside the col-md-?, create another div and put picture in that div, than you can easily add padding like so.

Since you are using Bootstrap, the column-gap property will be useful to implement. W3Schools Column-Gap for Bootstrap has documentation on how this can be used.

And for the HTML, have the class (col-gap) in the row div. But also note this may throw off the spacing of the col-md-6 (or other sizes) so to compensate reduce the size for each column. (i.e. col-md-6 -> col-md-5, even if there are only 2 columns)

I had to figure out how to do this for 3 columns. I wanted to round the corners of the divs and couldn't get the spacing to work. I used margins. In my case I figured for 90% of the screen to be filled in by the divs and 10% for margins:

and first+last child no border

Use bootstrap's .form-group class. Like this in your case:

I know this post is a little dated but I ran in to this same problem. Example of my html.

In order to create space between the groups I overrode bootstrap's margin of -15px in my site.css file by reducing the negative margin by 5.

I hope this helps somebody else.

I needed one column on mobile and two columns from tablet portrait up, with equal spacing between them in the middle (also without any grid-added padding inside columns). Could be achieved using spacing utilities and omitting the number in col-md:

Bootstrap col slightly uses some spaces both to the left and right. I have just added a block element like div and set the border for the differences. Also, adding some extra padding or margin in that extra div will work perfectly..

How about just adding a border the same color as the background using css? I'm new to this, so maybe there's a good reason not to, but it looked good when I tried it.

To obtain a particular width of spacing between columns, we have to set up padding in the standard Bootstrap's layout.

This will be useful..

If use want to increase or decrease further margin in right side of the box then simply edit margin-right property of list-item.

This by default provides some padding inside the outer div the way you seem to need. Moreover you can also modify the padding using custom CSS.

Rows are wrappers for columns. Each column has horizontal padding (called a gutter) for controlling the space between them. This padding is then counteracted on the rows with negative margins. This way, all the content in your columns is visually aligned down the left side.

So the right answer is: set cols' padding-left/right equal to minus your row's margin-left/right. That simple.

Create a class and use:

Where 1em on the max-width is equal to the left/right margin added together.

Not the answer you're looking for? Browse other questions tagged css twitter-bootstrap-3 or ask your own question.

4854
How to horizontally center an element
5841
How to disable text selection highlighting
637
Expand a div to fill the remaining width
296
How to place div side by side
2624
How can I transition height: 0; to height: auto; using CSS?
3082
How do I disable the resizable property of a textarea?
2324
What's the difference between SCSS and Sass?
340
Fluid width with equally spaced DIVs
1206
Center a column using Twitter Bootstrap 3
375
Remove padding from columns in Bootstrap 3