Linker Error in Xcode 5 for libzbar.a

After I integrate ZBar Sdk into my project, my xcode 5-DP starts showing below warning:

Basically, the instructions tell you how to check out the source code using Mercurial, and then compile your own libzbar.a file. This ought to solve your problem.

Just last night, in fact, I ended up having to follow the instructions again, because my version of ZBar wouldn't run after updating to Xcode 5. I encourage you to follow the link above, but I'm going to largely crib it here, along with some steps I've added for the new iPhone platform.

Download and install Mercurial for Mac. I took the latest one for OS X 10.8. (The installation screen, when you launch the installer, seems to still say 10.7, so don't be surprised.)

After installing Mercurial, download the source for ZBar with the following commands:

Select "Run" in the build configuration and click OK.

Next, we're going to compile libzbar for both the device and the simulator. In the Project and Targets list, select the libzbar target and click on the Build Settings tab. Verify your Architecture settings, as shown in the screenshot. (Make sure it says iOS and arm64 armv7 armv7s.)

Also, don't forget to change Architectures to Standard architectures (armv7, armv7s, arm64), otherwise your project won't compile with arm64. (This is not shown properly on screenshot) 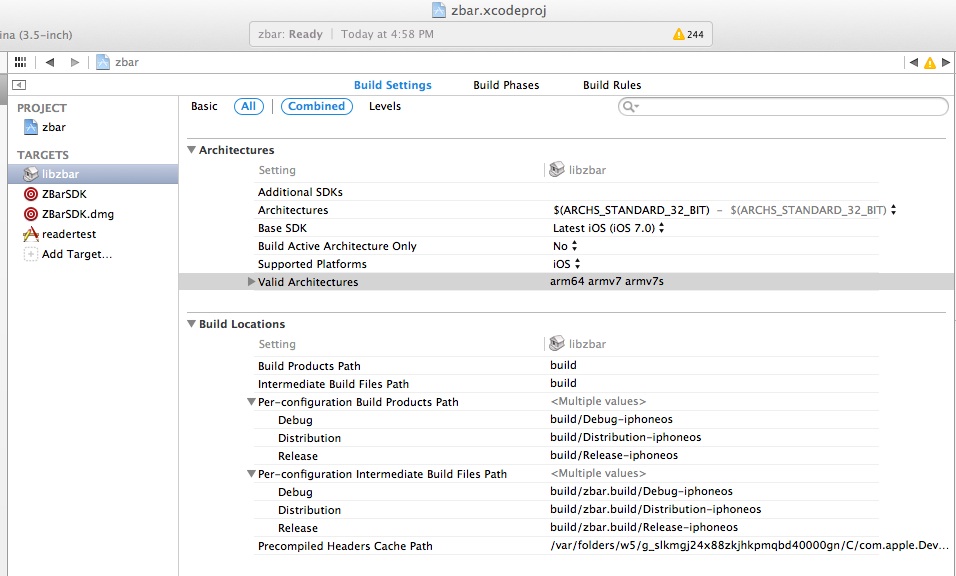 Now, here is the part I discovered last night. My Deployment Target was set to iOS 3.1. You'll get an error if you try compiling in Xcode 5 with that setting. I changed it to iOS 7.0. 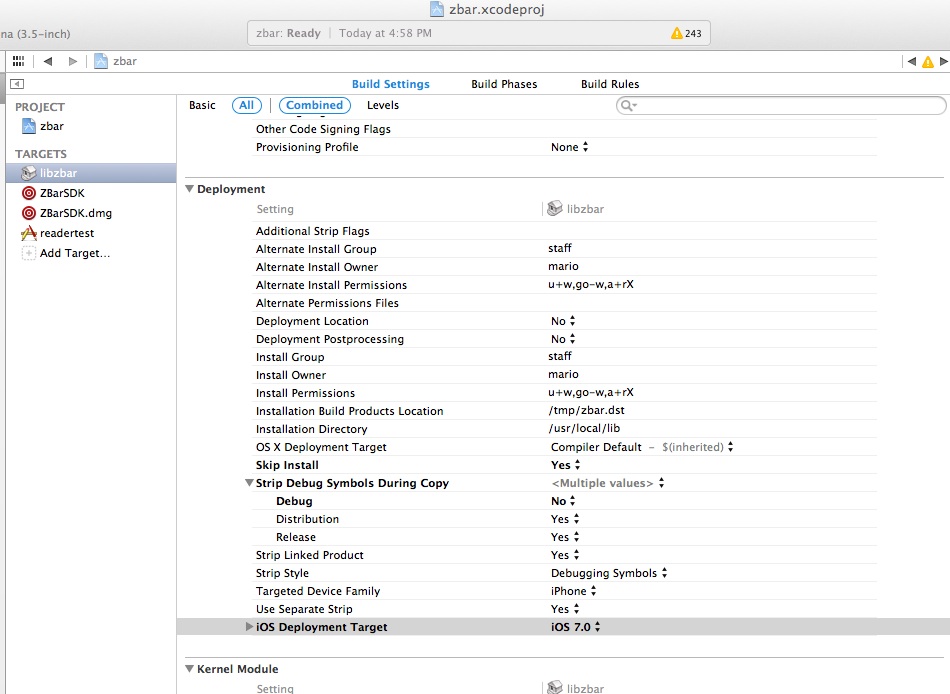 After verifying your settings and changing any as needed, run Build. Go back to "Product > Scheme > Edit Scheme…" and check the "Destination" drop-down menu. (See the screenshot above.) I had mine on iPhone Retina (3.5-inch). Change it to iOS Device and run Build a second time. You have now built the library twice: once for the simulator and once for the device. You'll need to combine the two libraries. Go to the following directory in Terminal:

In there are a bunch of cryptically named directories, one of which will begin "zbar". Here's my full path, as an example:

Go into that zbar directory, and then change into the Build/Products directory.

There you will see two folders: Release-iphoneos and Release-iphonesimulator. (Inside each is a lizbar.a file.) Combine them with the following command:

You have now created a universal library (libzbar.a) that you should use, replacing the one that came with your ZBar distribution. It is located in the same Build/Product directory.

As I've said, I have largely cribbed the instructions from the author of the link above, Mr. Cappelli, updating them for the latest Xcode.

Since Dec 2014, there is an easier solution than Mario's answer. Use CocoaPods and add this line to your Podfile:

Then, run the classic pod install. It will build fine, including for arm64.

I skirted the error by changing the "Build Active Architecture Only" to YES, not only for Debug but for Release too... At least for now, this saved me.

Just download ZBarSDK-1.3.1.dmg image, remove the ZBarSDK folder from your project and replace it with the last one: http://sourceforge.net/projects/zbar/files/iPhoneSDK/beta/

Not the answer you're looking for? Browse other questions tagged ios iphone ios7 xcode5 zbar-sdk or ask your own question.

1247
How can I develop for iPhone using a Windows development machine?
1286
Xcode - How to fix 'NSUnknownKeyException', reason: … this class is not key value coding-compliant for the key X" error?
206
Xcode 4 hangs at "Attaching to (app name)"
237
Xcode iOS project only shows "My Mac 64-bit" but not simulator or device
334
Can I safely delete contents of Xcode Derived data folder?
637
iOS app with framework crashed on device, dyld: Library not loaded, Xcode 6 Beta
901
Xcode error "Could not find Developer Disk Image"
851
Xcode 7 error: "Missing iOS Distribution signing identity for ..."
317
The iOS Simulator deployment targets is set to 7.0, but the range of supported deployment target version for this platform is 8.0 to 12.1
734
Xcode building for iOS Simulator, but linking in an object file built for iOS, for architecture 'arm64'