How to achieve pseudo-classical inheritance right on the class declaration?

No. No. No. This won't do. You're doing inheritance in JavaScript all wrong. Your code gives me migraines.

If you want something similar to classes in JavaScript then there are a lot of libraries out there which provide it to you. For example using augment you could restructure your code as follows:

I don't know about you but to me this looks a lot like classical inheritance in C++ or Java. If this solves your problem, great! If is doesn't then continue reading.

In a lot of ways prototypes are similar to classes. In fact prototypes and classes are so similar that we can use prototypes to model classes. First let's take a look at how prototypal inheritance really works: 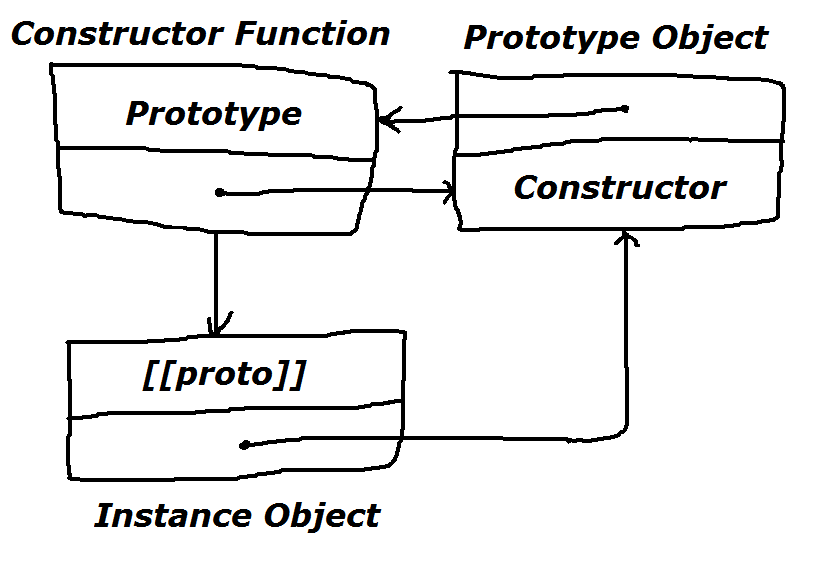 The above picture was taken from the following answer. I suggest you read it carefully. The diagram shows us:

For example, traditionally we may write:

However using our newfound knowledge we may write the same thing as:

Take a look at how augment achieves inheritance:

Notice that the last three lines are the same as that of CLASS from the previous section:

This tells us that once we have a prototype object all we need to do is get its constructor property and return it.

The first three lines of augment are used to:

That's all that there is to inheritance in JavaScript. If you want to create your own classical inheritance pattern then you should be thinking along the same lines.

The above extend function is very similar to augment. However instead of returning the constructor function it returns the prototype object. This is actually a very neat trick which allows static properties to be inherited. You can create a class using extend as follows:

Inheritance is just as simple:

Remember however that extend does not return the constructor function. It returns the prototype object. This means that you can't use the new keyword to create an instance of the class. Instead you need to use new as a method, as follows:

In fact isPrototypeOf is more powerful than instanceof because it allows us to test whether one class extends another class:

Besides this minor change everything else works just like it did before:

See the demo for yourself: http://jsfiddle.net/Jee96/

In addition because Xyz is the prototype object we can access Xyz.empty directly (i.e. empty is a static property of Xyz). This also means that static properties are automatically inherited and are no different from normal properties.

Finally, because the class is accessible from within the class definition as this, you can created nested classes which inherit from the class which they are nested within by using extend as follows:

See the demo for yourself: http://jsfiddle.net/Jee96/1/

There's an exhaustive tutorial on how to do what you're after.

I know this doesn't answer your question because as far as I know there is no good way to put everything in the function constructor and have it use prototype.

As I've commented; if you have trouble with the JavaScript syntax then typescript could be a good alternative.

Here is a helper function that I use for inheritance and overriding (calling super) using JavaScript (without Object.create)

Even if you find a way to write helper functions and make JS constructor functions look like Java classes you have to understand prototype.

You can always try jOOP, though it does require jQuery.

I believe you are looking for more functionality than this, but if you want to just inherit a bunch of methods from another class you could do this

Not the answer you're looking for? Browse other questions tagged javascript inheritance types prototype or ask your own question.

465
Use of .apply() with 'new' operator. Is this possible?
569
Is JavaScript's “new” keyword considered harmful?
276
Benefits of prototypal inheritance over classical?
134
Prototypical inheritance - writing up
65
What can the JavaScript prototype system do beyond mimicking a classical class system?
36
JavaScript inheritance and the constructor property
12
Is JavaScript 's “new” Keyword Considered Harmful (Part 2)?
4
What should I connect to the child prototype property in JavaScript
4
Object.create Prototype Chains
2
How do I make a nonexistent (non-member, non-global) method invocable without using eval?
See more linked questions

2839
How can I change an element's class with JavaScript?
811
How do you declare an interface in C++?
618
How to call a parent class function from derived class function?
1239
How do I add a class to a given element?
519
How to determine an object's class?
1007
How do I declare a namespace in JavaScript?
276
Benefits of prototypal inheritance over classical?
1293
Python class inherits object
16
Advantages of setting the “constructor” Property in the “prototype”
7
Difference between classical inheritance and prototype inheritance