Git status over all repo's

What tools, if any, are available to show the status of my git repo's and how much they are forward/behind versus their remotes? I'm imagining something like this exists:

First row shows repo1 is ahead 2 commits, second show remote2 is ahead with 3 commits, third show only remote of repo2 is ahead of 10 commits.

I'm not entirely sure what it means to say that one repo is ahead or behind another repo. They are just sets, and without any sort of reference, there is no ordering. You could say that the local repo has commits that the remote one doesn't. But you can't say whether it's ahead or behind without talking about branches. You might be able to say whether a repo is up-to-date or not though.

Also, when communicating with a remote, the local git client has no idea how many commits are in-between the local branch tip and the remote one. It won't know that until the data has been transferred locally.

What you can do instead, is run git fetch --all, and have a script like this (I called it `git-repo-status locally):

I realize it's not a direct answer to your issue, but I don't think what you want is possible without running git fetch --all and grabbing the revisions from upstream. If you're willing to do that, then the above may be useful to you.

You can find several scripts, all based on looking for .git folder:

The first one can be adapted to display the kind of status you are after:

I'm aware that this question is not that fresh anymore but I've written an open-source tool for exactly that reason: It finds local git repositories and tracks their state showing the current branch and a status string for all your local repositories in one place.

This makes it a perfect starting place for all your (git) development tasks as well. 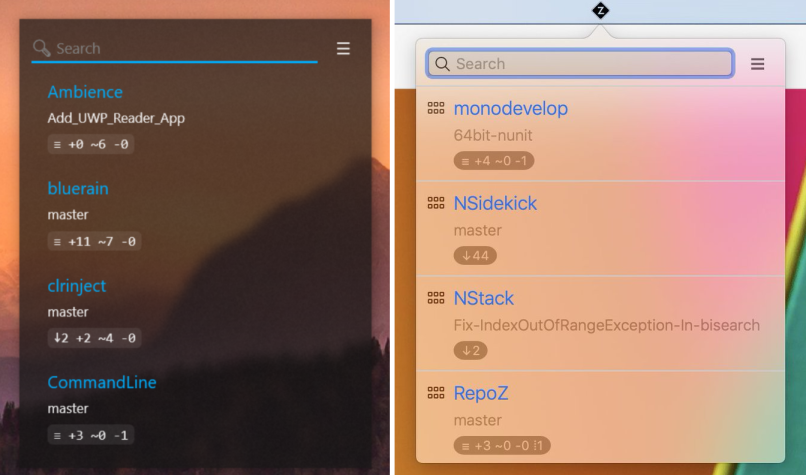 If you are using Windows, you might enjoy an additional effect:

Because with git you usually don't have dedicated branch folders like MyTool\trunk\... or MyTool\v2.0\... you can't see in which branch you are actively working in when using the Windows File Explorer.

It's 100% open source, so please give it a try and I would be very happy if you'd feel comfortable to contribute.

RepoZ now comes with a command line enhancement called grr which makes use of the aggregated repository information from RepoZ to show live data in the command line plus the possibility to jump from repository to repository with the cd command: grr cd RepoZ

Quick one-liner that assumes you're in a folder containing lots of git repo folders:

Not the answer you're looking for? Browse other questions tagged git status or ask your own question.

270
git ahead/behind info between master and branch?
28
git: Find all uncommitted locals repos in a directory tree
18
Git Status Across Multiple Repositories on a Mac
9
How to check the status of all git repositories at once?
11
How can I check the status of a remote Git repository?
21
Can I easily update all local git branches from remote branches simultaneously?
3
Alias that displays how many commits branches are ahead/behind master