What are Mixins (as a concept)

I'm trying to get my head around the Mixin concept but I can't seem to understand what it is. The way I see it is that it's a way to expand the capabilities of a class by using inheritance. I've read that people refer to them as "abstract subclasses". Can anyone explain why?

I'd appreciate if you'd explain your answer based on the following example (From one of my lecture slideshows): 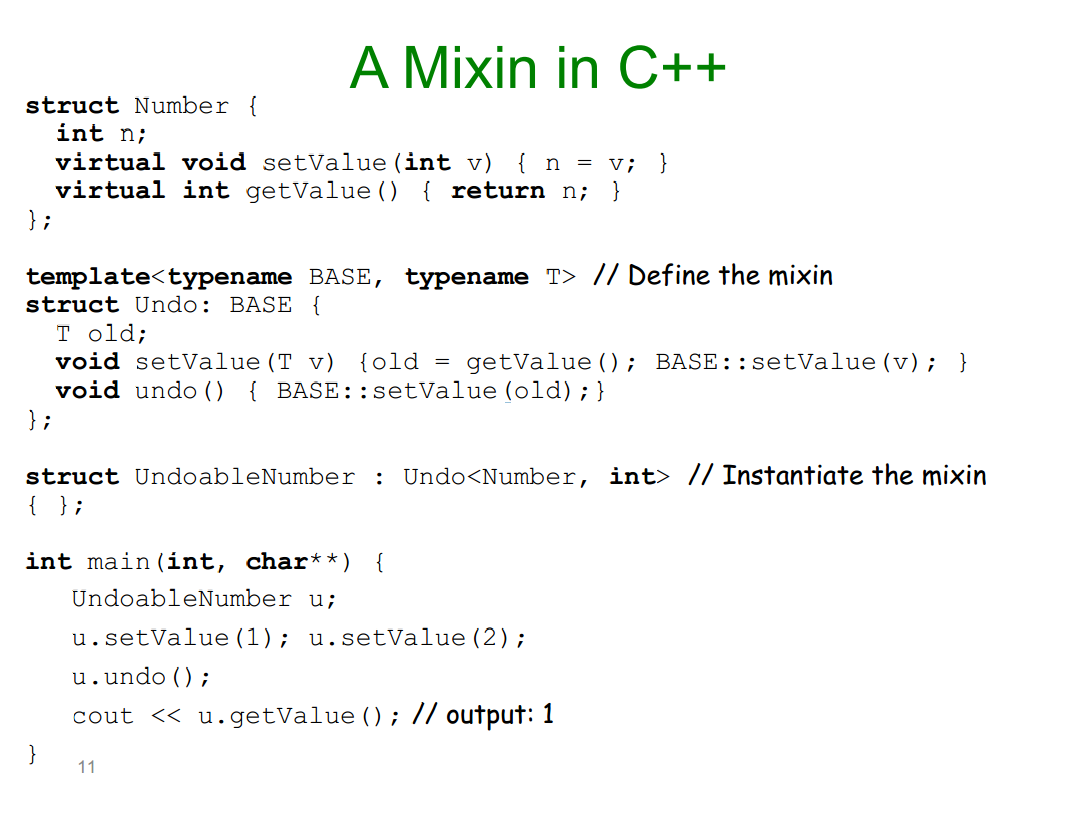 Before going into what a mix-in is, it's useful to describe the problems it's trying to solve. Say you have a bunch of ideas or concepts you are trying to model. They may be related in some way but they are orthogonal for the most part -- meaning they can stand by themselves independently of each other. Now you might model this through inheritance and have each of those concepts derive from some common interface class. Then you provide concrete methods in the derived class that implements that interface.

The problem with this approach is that this design does not offer any clear intuitive way to take each of those concrete classes and combine them together.

The idea with mix-ins is to provide a bunch of primitive classes, where each of them models a basic orthogonal concept, and be able to stick them together to compose more complex classes with just the functionality you want -- sort of like legos. The primitive classes themselves are meant to be used as building blocks. This is extensible since later on you can add other primitive classes to the collection without affecting the existing ones.

Getting back to C++, a technique for doing this is using templates and inheritance. The basic idea here is you connect these building blocks together by providing them via the template parameter. You then chain them together, eg. via typedef, to form a new type containing the functionality you want.

Taking your example, let say we want to add a redo functionality on top. Here's how it might look like:

You'll notice I made a few changes from your original:

Note that this is meant to be a simple example to illustrate the mix-in idea. So it doesn't take into account corner cases and funny usages. For example, performing an undo without ever setting a number probably won't behave as you might expect.

As a sidenote, you might also find this article helpful.

Another example (Extracted from "Mixin-based programming in C++"):

In this example, the mixin provides the functionality of counting vertices, given a graph class that performs trasversal operations.

Commonly, in C++ mixins are implemented through the CRTP idiom. This thread could be a good read about a mixin implementation in C++: What is C++ Mixin-Style?

Here is an example of a mixin that takes advantage of the CRTP idiom (Thanks to @Simple):

This mixin provides the functionality of heterogeneous copy to a set (hierarchy) of shape classes.

I like the answer from greatwolf, but would offer one point of caution.

greatwolf stated, "The virtual functions really aren't necessary here because we know exactly what our composed class type is at compile-time." Unfortunately, you can run into some inconsistent behavior if you use your object polymorphically.

Let me tweak the main function from his example:

By making the "set" function virtual, the proper override will be called and the inconsistent behavior above will not occur.

Mixins in C++ are expressed using the Curiously Recurring Template Pattern (CRTP). This post is an excellent breakdown of what they provide over other reuse techniques... compile-time polymorphism.

To understand the concept forget classes for a moment. Think (most popular) JavaScript. Where objects are dynamic arrays of methods and properties. Callable by their name as a symbol or as a string literal. How would you implement that in standard C++ in a year 2018? Not easily. But that is the core of the concept. In JavaScript one can add and remove (aka mix-in) whenever and whatever one wishes to. Very important: No class inheritance.

Now onto C++. Standard C++ has all you need, does not help as a statement here. Obviously I will not write a scripting language in order to implement mix-in using C++.

Yes, this is a good article , but for inspiration only. CRTP is not a panacea. And also the so called academic approach is here, also (in essence) CRTP based.

Before down-voting this answer perhaps consider my p.o.c. code on wand box :)

This works the same as an interface and maybe more so as an abstract, but interfaces are easier to get first time.

It addresses many issues but one I find in development that comes up a lot is external apis. imagine this.

at any point your application may need to run using data from facebook or your database. so what you do is create an interface that says "anything that implements me is going to definitely have the following methods" now you can implement that interface into your application...

because an interface promises that the implementing repositories will have the methods declared in them, you know that wherever or whenever you use that interface in your application, if you switch the data over, it's always going to have the methods you are defining and thus have data to work off of.

There are many more layers to this pattern of working, but the essence is that it is good because data or other such persistant items become a big part of your application, and if they change without you knowing, your application can break :)

Not the answer you're looking for? Browse other questions tagged c++ oop templates mixins or ask your own question.

65
Are static variables in a base class shared by all derived classes?
37
What is C++ Mixin-Style?
3
Qt: inheritance cause ambiguous
2
Virtual inheritance impact on constructor
2
How to instantiate different classes depending on the type of a parameter?
5
MSVC constexpr Compiler Bug?
2
Access "this" pointer of concrete class from interface
3
GMOCK base class methods in derived class
1
Class with replaceable method that is called many times
3
Specialization with automatic inheritance
See more linked questions