How to get the raw value an <input type=“number”> field?

How can i get the "real" value of an <input type="number"> field?

I have an input box, and i'm using newer HTML5 input type number:

This is mostly supported in Chrome 29:

then edQuantity.value = 4, and all is well.

But if the user enters invalid text, i want to color the input-box red:

Unfortunately, for a type="number" input box, if the value in the text-box is not a number then value returns an empty string:

How can i get the "raw" value of an <input type="number"> control?

i tried looking through Chrome's list of other properties of the input box: 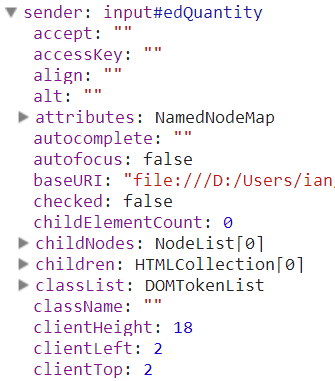 i didn't see anything that resembles the actual input.

Nor could i find a way to tell if the box "is empty", or not. Maybe i could have inferred:

Note: You can ignore everything after the horizontal rule; it's just filler to justify the question. Also: don't confuse the example with the question. People might want the answer to this question for reasons other than coloring the box red (One example: converting the text "four" into the latin "4" symbol during the onBlur event)

How can i get the "raw" value of an <input type="number"> control?

According to the WHATWG, you shouldn't be able to get the value unless it's valid numeric input. The input number field's sanitization algorithm says the browser is supposed to set the value to an empty string if the input isn't a valid floating point number.

The value sanitization algorithm is as follows: If the value of the element is not a valid floating-point number, then set it to the empty string instead.

By specifying the type (<input type="number">) you're asking the browser to do some work for you. If, on the other hand, you'd like to be able to capture the non-numeric input and do something with it, you'd have to rely on the old tried and true text input field and parse the content yourself.

The W3 also has the same specs and adds:

User agents must not allow the user to set the value to a non-empty string that is not a valid floating-point number.

It doesn't answer the question, but the useful workaround is to check

The ValidityState of an object gives clues about what the user entered. Consider a type="number" input with a min and max set

We always want to use .validity.valid.

Other properties only give bonus information:

You'll have to ensure that the the browser supports HTML5 validation before using it:

Spudly has a useful answer that he deleted:

Just use the CSS :invalid selector for this.

This will trigger your element to turn red whenever a non-numeric valid is entered.

Browser support for <input type='number'> is about the same as :invalid, so no problem there.

Track all pressed keys based on their key codes

I suppose one could listen to the keyup events and keep an array of all characters entered, based on their keycodes. But it's a pretty tedious task and probably prone to bugs.

Select the input and get the selection as a string

Not the answer you're looking for? Browse other questions tagged javascript html validation input or ask your own question.

4
How to get the value of an <input>
0
Get invalid content from input type='number'
0
How to get TEXT (not value) of an input of type “number”
1
Get off-type content from html input
1
Regarding Form tag and input tag in HTML
412
Disable validation of HTML5 form elements
77
How to get text of an input text box during onKeyPress?
16
Replacing a dot using JavaScript instead removes everything
7
jQuery val refuses to return non numeric input from a number field (Under Chrome)
6
Reset form invalid values
see more linked questions…