Is there a nice way in MySQL to replicate the SQL Server function ROW_NUMBER()?

Then I could, for example, add a condition to limit intRow to 1 to get a single row with the highest col3 for each (col1, col2) pair.

There is no ranking functionality in MySQL. The closest you can get is to use a variable:

so how would that work in my case? I'd need two variables, one for each of col1 and col2? Col2 would need resetting somehow when col1 changed..?

Yes. If it were Oracle, you could use the LEAD function to peak at the next value. Thankfully, Quassnoi covers the logic for what you need to implement in MySQL.

I want the row with the single highest col3 for each (col1, col2) pair.

That's a groupwise maximum, one of the most commonly-asked SQL questions (since it seems like it should be easy, but actually it kind of isn't).

I often plump for a null-self-join:

“Get the rows in the table for which no other row with matching col1,col2 has a higher col3.” (You will notice this and most other groupwise-maximum solutions will return multiple rows if more than one row has the same col1,col2,col3. If that's a problem you may need some post-processing.)

I always end up following this pattern. Given this table:

You can get this result:

By running this query, which doesn't need any variable defined:

From MySQL 8.0.0 and above you could natively use windowed functions.

MySQL now supports window functions that, for each row from a query, perform a calculation using rows related to that row. These include functions such as RANK(), LAG(), and NTILE(). In addition, several existing aggregate functions now can be used as window functions; for example, SUM() and AVG().

ORDER BY affects the order in which rows are numbered. Without ORDER BY, row numbering is indeterminate.

Check out this Article, it shows how to mimic SQL ROW_NUMBER() with a partition by in MySQL. I ran into this very same scenario in a WordPress Implementation. I needed ROW_NUMBER() and it wasn't there.

The example in the article is using a single partition by field. To partition by additional fields you could do something like this:

Using concat_ws handles null's. I tested this against 3 fields using an int, date, and varchar. Hope this helps. Check out the article as it breaks this query down and explains it.

I would also vote for Mosty Mostacho's solution with minor modification to his query code:

Which will give the same result:

With the only difference that the query doesn't use JOIN and GROUP BY, relying on nested select instead.

I would define a function:

then I could do:

Now you don't have a subquery, which you can't have in views.

query for row_number in mysql

Important: Please consider upgrading to MySQL 8+ and use the defined and documented ROW_NUMBER() function, and ditch old hacks tied to a feature limited ancient version of MySQL

Now here's one of those hacks:

The answers here that use in-query variables mostly/all seem to ignore the fact that the documentation says (paraphrase):

Don't rely on items in the SELECT list being evaluated in order from top to bottom. Don't assign variables in one SELECT item and use them in another one

As such, there's a risk they will churn out the wrong answer, because they typically do a

If these are ever evaluated bottom up, the row number will stop working (no partitions)

So we need to use something with a guaranteed order of execution. Enter CASE WHEN:

Here's how this fits together:

We this get to a situation where this:

Has the general form:

The solution I found to work the best was using a subquery like this:

I've found this to be very flexible, even if it is a little bit costly.

The rownumber functionality can't be mimicked. You might get the results you expect, but you'll most likely get disappointed at some stage. Here's what mysql documentation says:

For other statements, such as SELECT, you might get the results you expect, but this is not guaranteed. In the following statement, you might think that MySQL will evaluate @a first and then do an assignment second: SELECT @a, @a:=@a+1, ...; However, the order of evaluation for expressions involving user variables is undefined.

MariaDB 10.2 is implementing "Window Functions", including RANK(), ROW_NUMBER() and several other things:

Based on a talk at Percona Live this month, they are reasonably well optimized.

The syntax is identical to the code in the Question.

MySQL has supported the ROW_NUMBER() since version 8.0+.

The row_number() is a ranking function that returns a sequential number of a row, starting from 1 for the first row.

I don't see any simple answer covering the "PARTITION BY" part so here's mine :

This could also be a solution:

Solutions with cross join and comma won't work if your query has GROUP BY statement. For such cases you can use subselect:

I think you can use DENSE_RANK() function here. Example:

A bit late but may also help to someone who looks for answers...

Between rows/row_number example - recursive query that may be used in any SQL:

Also a bit late but today I had the same need so I did search on Google and finally a simple general approach found here in Pinal Dave's article http://blog.sqlauthority.com/2014/03/09/mysql-reset-row-number-for-each-group-partition-by-row-number/

I wanted to focus on Paul's original question (that was my problem as well) so I summarize my solution as a working example.

Beacuse we want to partition over two column I would create a SET variable during the iteration to identify if a new group was started.

The 3 means at the first parameter of MAKE_SET that I want both value in the SET (3=1|2). Of course if we do not have two or more columns constructing the groups we can eliminate the MAKE_SET operation. The construction is exactly the same. This is working for me as required. Many thanks to Pinal Dave for his clear demonstration.

This is not the most robust solution - but if you're just looking to create a partitioned rank on a field with only a few different values, it may not be unwieldily to use some case when logic with as many variables as you require.

Something like this has worked for me in the past:

This Work perfectly for me to create RowNumber when we have more than one column. In this case two column.

MySQL Since version 8, supports ROW_NUMBER(), so you can use the below query as you would use in SQL Server

for the partioning over anothe column one way is that described by @abcdn. However, it has a low performance. I propose use this code which does not require joining a table with itself: Considee the same table. 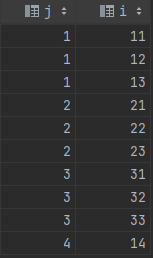 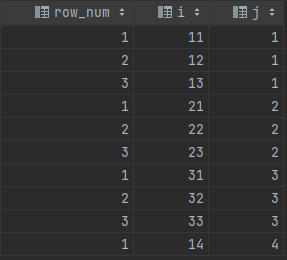 17
Is there a way to get the row number in Mysql like the rownum in oracle
10
ROW_NUMBER() equivalent in MySQL for inserting
5
Get row position in MYSQL query
6
MySQL Convert ROW_NUMBER() OVER PARTITION
2
MYSQL Select row_number() doesn't work
2
T-SQL Row_Number() Over() into MySQL
1
what is the alternative for ROWNUM in MySQL in query?
0
SQL query to find the most common index of a minimal field
-4
Is there any syntax error because, as per my understanding, the query is perfect
-2
How to create temporary sequence in sql query
See more linked questions

1447
Can I concatenate multiple MySQL rows into one field?
3089
Should I use the datetime or timestamp data type in MySQL?
900
How can I SELECT rows with MAX(Column value), PARTITION by another column in MYSQL?
1275
Retrieving the last record in each group - MySQL
919
How to Join to first row
1556
What are the options for storing hierarchical data in a relational database?
1550
How to reset AUTO_INCREMENT in MySQL
2655
How do I import an SQL file using the command line in MySQL?
2
SQL Adding row numbers