I have recently created a library Jar file that I imported in my Android project. I am able to call functions and use classes that are present in this Jar file, but Android Studio keeps telling me that it cannot "resolve symbol" of the class I am using. Please see the screenshot below:

The code builds and executes successfully. The function isThisThingWorking() simply returns true, and that is just what boolean blah gets set to.

I have tried pressing the Sync Project with Gradle Files button and using the Invalidate Caches / Restart... option from Android Studio's File menu, but none of this solved the issue. What can I do to make the Android Studio IDE not display the Cannot resolve symbol 'xxxSDK' error?

I have faced this issue when IntelliJ IDEA got closed abruptly due to OS crash.

You can do "File" -> "Invalidate Caches...", and select "Invalidate and Restart" option to fix this.

EDIT: For most folks, Senthil's answer will be more appropriate. I am leaving this one as the accepted answer because it solved my specific problem.

I found the issue - my SDK.jar was not generated correctly. It included .java files instead of .class files. This explains why the IDE was not able to find the SDK class. The package structure was still correct in the Jar, which is why the package name itself is not a red color. The code worked correctly, because the compiler knew to compile the .java files.

To solve the issue, I modified my build.gradle of my SDK project to include .class files, instead of .java files, when creating the Jar. Including this new Jar instead of the old Jar fixed the IDE issue.

Try adding the library to the Project Structure.

To do this, on the menu choose File -> Project Structure. Select the Libraries option and click the green + to add your library.

This was always happening to me after switching branches on my current project: a lot of non-sense erros being reported by the IDE.

The solution is to modify and force a build.gradle synchronization.

This problem regularly generated in android 3.1. I have tried every possible way. But it resolved when i delete .gradle and .idea file and start Android studio which is already close.

Android studio create .idea and .gradle file for your project again. After this click on sync project with gradle. Now everything works fine.

Changing the language injection settings worked for me.

Now select Language Injection Settings and a window will open as shown below.

Make sure you have the right file type selected in ID: field and Uncheck the options related to your error codes and click Ok 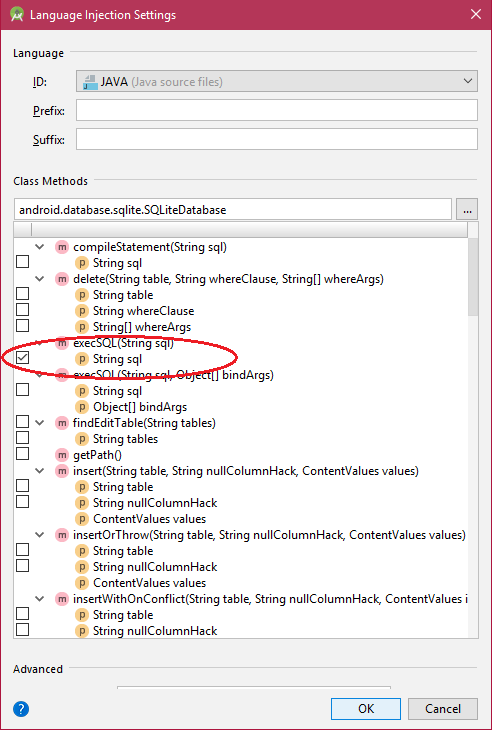 Hope this helps somebody.

After trying above options everything should be working fine.

For me worked only

I deleted all build folders and .idea files of all project modules separately and rebuilt the project. That worked for me.