I seem to be completely unable to install the Windows 7 SDK onto my machine, and the only solution I've found on the web is to make a swathe of registry changes. I've done this - still no success.

This is the reported error:

Installation of the "Microsoft Windows SDK for Windows 7" product has reported the following error: Please refer to Samples\Setup\HTML\ConfigDetails.htm document for further information.

Please attempt to resolve the problem and then start Windows SDK setup again. If you continue to have problems with this issue, please visit the SDK team support page at http://go.microsoft.com/fwlink/?LinkId=130245.

There is no Samples directory to refer too, and the SDK support team don't appear to live there any longer.

How do I fix this problem?

Microsoft now has a knowledge base article called Windows SDK Fails to Install with Return Code 5100 that describes this problem and its fix:

The error message is located in the log file, which can be opened through the View Log button in the installer. Otherwise, it can be found here: %userprofile%\AppData\Local\Temp\ or %temp%. The log file is most likely called SDKSetup_7.xxxxx.log.

I just had this problem, and I looked at the solution at Ctrl+F5, Fix Problem Installing Windows SDK for Windows 7, but it didn't work.

I googled around and found the page Installing Visual C++ 2010 and Windows SDK for Windows 7: offline installer and installation troubleshooting and the advice there worked. Basically you could have one of several problems, and you have to look in the log file to see what's going on. In my log file I had:

so as that above web page suggested, I uninstalled both copies of the Visual C++ 2010 Redistributable Package that I had (both x86 and x64), and then when I ran the Windows 7 SDK installer again, it worked.

Although you might have a different problem than me. Try the solutions at the Ctrl+F5 and patheticcockroach.com websites that I linked.

I hoped this helped!

All of these (and other) solutions have failed completely for me so I figured out another.

You need the offline installation package (mine was x64), and you need to manually install only the samples. Opening the ISO-file with, for example, 7-Zip from location Setup\WinSDKSamples_amd64 and running WinSDKSamples_amd64.msi did this for me.

Then you just use the normal setup file to REPAIR the installation and choose whatever components you wish.

You should really check the log. It seems that quite a few components can cause the Windows SDK installer to fail to install with this useless error message. For instance it could be the Visual C++ Redistributable Package as mentioned there.

I have had this same problem with the x64 version installation. It relates (in my case at least) to the dexplore.exe installation. I uninstalled dexplore, reinstalled it, did a heap of registry changes, etc. as per various blogs and SDKs all to no avail. What finally fixed it for me was editing this registry key:

I changed the value to 0. Once the SDK had installed (quite happily this time) I set the value back to 1.

What alerted me to the possible error was the following in the SDK setup log:

And this in the dexplore installation logfile:

I hope this is of assistance in your situation.

One of the things to also keep in mind is that when you have Visual Studio 2010 SP1 installed some C++ compilers and libraries may have been removed. There's been an update made available by Microsoft to make sure those are brought back to your system.

Also, when you read the VS2010 SP1 README you'll also notice that some notes have been made in regards to the Windows 7 SDK (See section 2.2.1) installation. It may be that one of these conditions may apply to you and therefore may need to uncheck the C++ compiler-checkbox as the SDK installer will attempt to install an older version of compilers ÓR you may need to uninstall VS2010 SP1 and re-run the SDK 7.1 installation, repair or modification.

Condition 1: If the Visual C++ Compilers checkbox is selected when the Windows SDK 7.1 is installed, repaired, or modified after Visual Studio 2010 SP1 has been installed, the error may be encountered and some selected components may not be installed.

However, even then I found that I still needed to uninstall any existing Visual C++ 2010 redistributables, as has been suggested by mgrandi.

I could never get the Windows 7 SDK to install either, and it suggested I remove the latest SDK and Visual Studio 2012 Express. That didn't work.

There was also something about .NET 3.5. I installed the Server 2008 SDK with .NET 3.5, uninstalled Visual Studio 2010 redistributables and made sure redistributables were unchecked in the installation options.

Also, you need the .NET 4 framework already installed, which you can download from Microsoft's site. Then it worked.

Uninstalling all C++ redistributables and unchecking the C++ option worked for me. Note that I have VS2010 SP1, and VS2012 installed already.

mgrandi provided a very good resource and answer. I followed similar guidelines and by removing 'leftover' components managed to solve the problem.

As a reference, take a look at Windows SDK for Windows 7 and .NET Framework 4 Release Notes.

This downloads the release notes of the SDK (you should also have it on your computer after trying to install the SDK), and in the section 'Installing and Uninstalling the Windows SDK' you can see that Microsoft recommend cleaning some mess after them.

I'm having the same error as this "Windows 7 SDK installation failure": 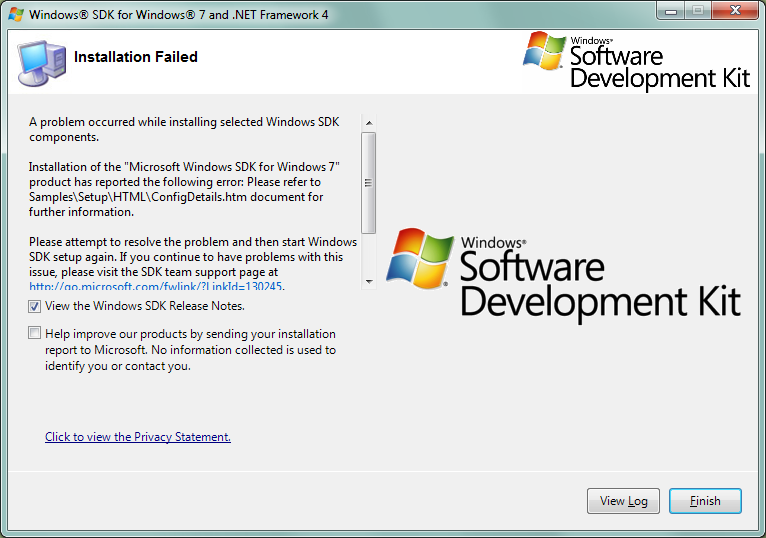 After finding out, I've got the solution.

It may also happen that the SDK installation runs through with a "success" message at the end, but nothing was actually installed. The only way to really find out whether the SDK was installed is to check the respective directory. C:Files\Microsoft SDKs\Windows\v7.1 or C:Files (x 86) SDKs\Windows\v7.1. If the subdirectory "v 7.1" was created and has some content, the SDK was installed. The solution for this problem is the same as for the issue with the error message: Uninstall Microsoft Visual C++ 2010 Redistributable (see below).

Before the installation, I had the following Microsoft Visual C++ 2010 Redistributable installations. Note that the x 64 version is updated.

Do you have access to a PC with Windows 7, or a PC with the SDK already installed?

If so, the easiest solution is to copy the C:\Program Files\Microsoft SDKs\Windows\v7.1 folder from the Windows 7 machine to the Windows 8 machine.

Not the answer you're looking for? Browse other questions tagged winapi failed-installation or ask your own question.