How is git revert used?

This might sound like a duplicate question but when people ask it, the response is often, use git reset as per Revert to a commit by a SHA hash in Git?.

Then when someone asks how to use git reset people reply saying you should use git revert as per Git - how to rollback.

Before you know it, eight different people appeared with their own unique ways to save the OP's ass, all of which is over your head.

So let’s try and stick the brief and write a Dummies Guide to git revert.

A scenario: you've committed twice to master and it’s bad. You've pushed and other people have your bad changes.

You want to undo it. It’s not something you can hand-undo in code yourself, say some wizard or package manager changed tons of stuff all over the place - you just want to put it all back how it was.

This is what source control is all about. I'm sure it’s easy.

Okay, you're going to use git revert, but how?

And after running git revert, do you have to do something else after? Do you have to commit the changes revert made or does revert directly commit to the repository or what??

Obviously, you'll need to push again and probably announce your balls-up to the team.

git revert simply creates a new commit that is the opposite of an existing commit.

It leaves the files in the same state as if the commit that has been reverted never existed. For example, consider the following simple example:

In this example the commit history has two commits and the last one is a mistake. Using git revert:

So there is a consistent history of what has happened, yet the files are as if the bad update never occured:

It doesn't matter where in the history the commit to be reverted is (in the above example, the last commit is reverted - any commit can be reverted).

do you have to do something else after?

A git revert is just another commit, so e.g. push to the remote so that other users can pull/fetch/merge the changes and you're done.

Do you have to commit the changes revert made or does revert directly commit to the repo?

git revert is a commit - there are no extra steps assuming reverting a single commit is what you wanted to do.

Obviously you'll need to push again and probably announce to the team.

Indeed - if the remote is in an unstable state - communicating to the rest of the team that they need to pull to get the fix (the reverting commit) would be the right thing to do :).

git revert creates a new commit with the changes that are rolled back. git reset erases your Git history instead of making a new commit.

The steps after are the same as any other commit.

As a beginner, after some trial and error (more errors than trials) I've got an important point:

That is, if you use revert with the first commit id, you'll find yourself into an empty directory and an additional commit in history, while with reset your directory will be.. reverted back to the initial commit and your history will get as if the last commit(s) never happened.

Using git revert cb76ee4 will by default bring your files back to 01b56c6 and will add a further commit to your history:

git reset 01b56c6 will instead bring your files back to 01b56c6 and will clean up any other commit after that from your history :

I know these are "the basics" but it was quite confusing for me, by running revert on first id ('first commit') I was expecting to find my initial files, it taken a while to understand, that if you need your files back as 'first commit' you need to use the next id.

The reason reset and revert tend to come up a lot in the same conversations is because different version control systems use them to mean different things.

In particular, people, who are used to Subversion or Perforce, who want to throw away uncommitted changes to a file, will often reach for revert before being told that they actually want reset.

Similarly, the revert equivalent in other VCSes is often called rollback or something similar - but "rollback" can also mean "I want to completely discard the last few commits", which is appropriate for reset but not revert. So, there's a lot of confusion where people know what they want to do, but aren't clear on which command they should be using for it.

As for your actual questions about revert...

And after running git revert do you have to do something else after? Do you have to commit the changes revert made or does revert directly commit to the repository or what??

By default, git revert prompts you for a commit message and then commits the results. This can be overridden. I quote the man page:

With this option, git revert will let you edit the commit message prior to committing the revert. This is the default if you run the command from a terminal.

Usually the command automatically creates some commits with commit log messages stating which commits were reverted. This flag applies the changes necessary to revert the named commits to your working tree and the index, but does not make the commits. In addition, when this option is used, your index does not have to match the HEAD commit. The revert is done against the beginning state of your index.

This is useful when reverting more than one commits' effect to your index in a row.

In particular, by default it creates a new commit for each commit you're reverting. You can use revert --no-commit to create changes reverting all of them without committing those changes as individual commits, and then commit at your leisure.

I reverted back a few commits by running 'git revert commit id' such as:

Then I was prompted to commit the revert (just as you would when running 'git commit'). My default terminal program is Vim, so I ran:

Finally, I pushed the change to the repository with:

The below infographic is showing how git revert is essentially an inverted git cherry-pick, undoing stuff by rolling forward; the target commit being reverted stays in history!

Use git revert when you cannot rewrite the entire history, but still want to undo an earlier commit completely. As with most Git commands, revert is performed locally, and hence, the resulting commit needs to be pushed in order to be shared with the rest of your team. 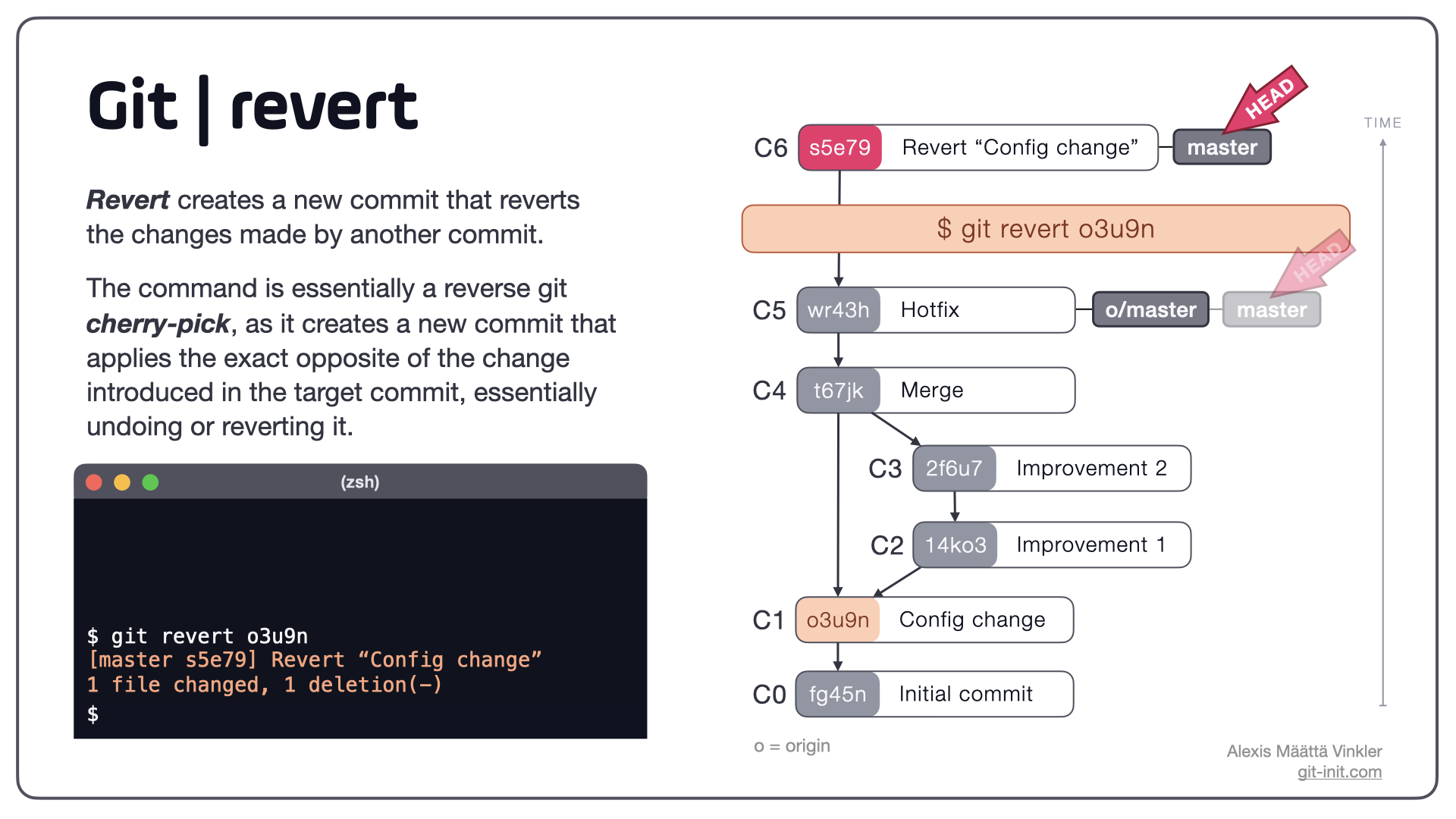 3
How do I undo a previous commit in Github
-3
'git revert' Changes Nothing But Adds a New Commit
721
Revert to a commit by a SHA hash in Git?
34
Git: remove earlier commit but keep recent changes
1
Git - how to rollback
0
delete a commit from git which is not the last commit
1
How to revert a commit as a new commit in a branch
0
Open old Github Commit in Visual Studio
1
How to discard changes that came from an already-merged Git branch?
-1
Is there any way to merge the changes back to the branch when we perform revert in Azure DevOps
See more linked questions