How should I set my gamma and Cost parameters in libSVM when I am using an imbalanced dataset that consists of 75% 'true' labels and 25% 'false' labels? I'm getting a constant error of having all the predicted labels set on 'True' due to the data imbalance.

If the issue isn't with libSVM, but with my dataset, how should I handle this imbalance from a Theoretical Machine Learning standpoint? *The number of features I'm using is between 4-10 and I have a small set of 250 data points.

Classes imbalance has nothing to do with selection of C and gamma, to deal with this issue you should use the class weighting scheme which is avaliable in for example scikit-learn package (built on libsvm)

Selection of best C and gamma is performed using grid search with cross validation. You should try vast range of values here, for C it is reasonable to choose values between 1 and 10^15 while a simple and good heuristic of gamma range values is to compute pairwise distances between all your data points and select gamma according to the percentiles of this distribution - think about putting in each point a gaussian distribution with variance equal to 1/gamma - if you select such gamma that this distribution overlaps will many points you will get very "smooth" model, while using small variance leads to the overfitting.

Imbalanced data sets can be tackled in various ways. Class balance has no effect on kernel parameters such as gamma for the RBF kernel.

The two most popular approaches are:

I know this has been asked some time ago, but I would like to answer it since you might find my answer useful.

As others have mentioned, you might want to consider using different weights for the minority classes or using different misclassification penalties. However, there is a more clever way of dealing with the imbalanced datasets.

You can use the SMOTE (Synthetic Minority Over-sampling Technique) algorithm to generate synthesized data for the minority class. It is a simple algorithm that can deal with some imbalance datasets pretty well.

In each iteration of the algorithm, SMOTE considers two random instances of the minority class and add an artificial example of the same class somewhere in between. The algorithm keeps injecting the dataset with the samples until the two classes become balanced or some other criteria(e.g. add certain number of examples). Below you can find a picture describing what the algorithm does for a simple dataset in 2D feature space.

Associating weight with the minority class is a special case of this algorithm. When you associate weight $w_i$ with instance i, you are basically adding the extra $w_i - 1$ instances on top of the instance i! 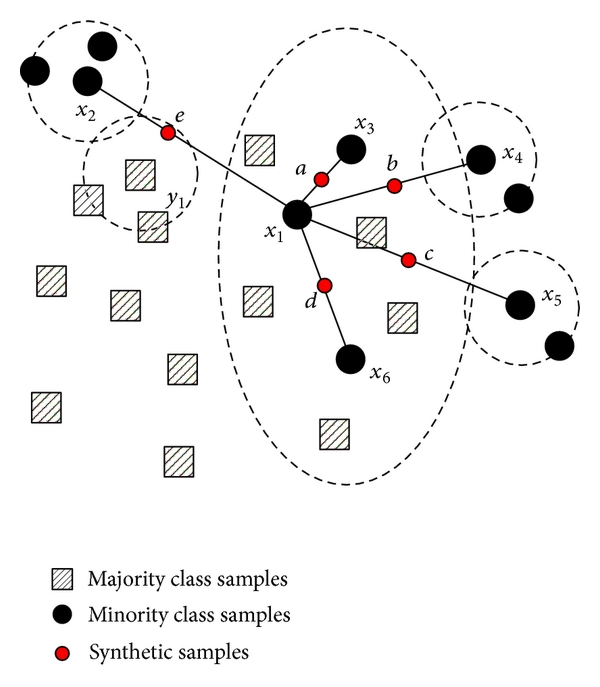 Not the answer you're looking for? Browse other questions tagged machine-learning svm libsvm or ask your own question.

8
How should I teach machine learning algorithm using data with big disproportion of classes? (SVM)