Up until recently, I was able to launch/open JNLP files in Firefox using Java web start.

Don't know what happened all of a sudden JNLP files stopped launching, a splash screen appears saying Java Starting... and then nothing happens. Even the Java Console in the browser and javacpl.cpl applet doesn't open.

Done some googling for this problem, people suggested to start javaws.exe with -viewer option but same behavior (a splash screen appears saying "Java Starting..." and then disappears)

The problem is that I don't know any place (logs etc.) to look for to see what is causing the problem.

I am using WinXP SP3, and some of the screenshots below shows further info about my system. I can provide any other detail if required but please help me solve this problem.

Have a look at what happens if you run javaws.exe directly from the command line.

I know this is an older question but this past week I started to get a similar problem, so I leave here some notes regarding the solution that fits me.

This happened only in some Windows machines using even the last JRE to date (1.8.0_45).

The Java Web Start started to load but nothing happened and none of the previous solution attempts worked.

After some digging i've found this thread, which gives the same setup and a great explanation.

So, in conclusion, it was a memory problem in x86 JRE and since our JNLP's max heap was defined as 1024MB, we changed to 780MB as suggested and it was fixed.

However, if you need more than 780MB, can always try launching in a x64 JRE version.

i had the same problem here. go to your Java Control Panel and Settings... Uncheck 'Keep temporary files on my computer'. Apply changes and try again your .jnlp 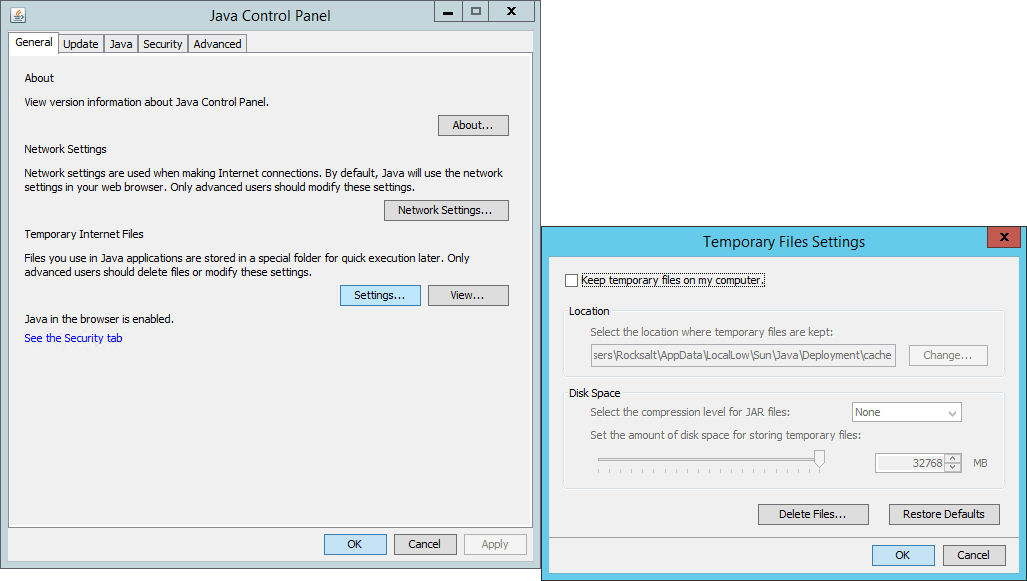 Please let me know your feedback too. :D

Java web start should be enabled.
Check if javaws (Java web start is enabled for your system), Use below command in console to open java control panel. 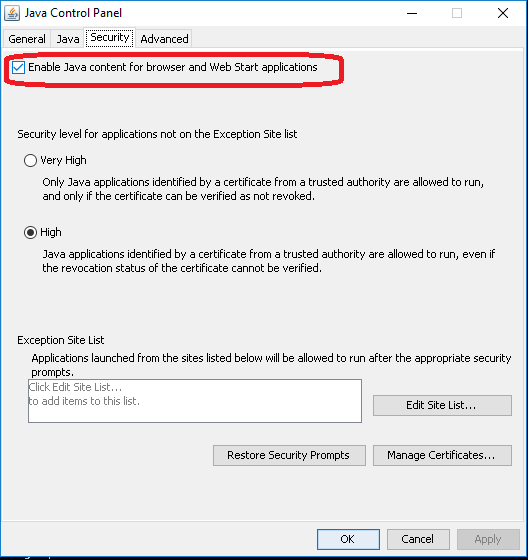 If javacpl does not open and gives you Could not find the main class:, it could be that Java is confused because of changes in deployment.properties (can be found in C:\Users\<username>\AppData\LocalLow\Sun\Java\Deployment on Win7). Delete that file and everything's fine.

This bug seems to be 6 years old, cf. An app should be able to ignore properties that have become obsolete over time, shouldn't it?

Although this question is bit old, the issue was caused by corrupted ClearType registry setting and resolved by fixing it, as described in this ClearType, install4j and case of Java bug post.

Do you know what ClearType (font-smoothing technology in Windows) has in common with Java (programming language and one of the recommended frameworks)?

Nothing except that they were working together hard at making me miserable for few months. I had some Java software that I couldn’t install. I mean really couldn’t – not even figure out reason or reproduce it on another PC.

Recently I was approved for Woopra beta (site analytics service) and it uses desktop client written in Java… I couldn’t install. That got me really mad. :)

Story All of the software in question was similar :

setup based on install4j; setup crashing with bunch of errors. I was blaming install4j during early (hundred or so) attempts to solve issue. Later I slowly understood that if it was that bugged for that long time – solution would have been created and googled.

Tracing After shifting focus from install4j I decided to push Java framework. I was trying stable versions earlier so decided to go for non-stable 1.6 Update 10 Release Candidate.

This actually fixed error messages but not crashes. I had also noticed that there was new error log created in directory with setup files. Previously I had only seen logs in Windows temporary directory.

Happy ending? Nope. Now installed app was crashing. But it really got me thinking. If console works but graphical interface doesn’t – there must be problem with latter.

One more error log (in application folder) was now saying (among other things) :

Solution I immediately launched ClearType Tuner from Control Panel and found setting showing gibberish number. After correcting it to proper one all problems with Java were instantly gone.

I was also facing the same problem. To fix this to the following steps.

Is this an application to which you have the code? Java 6u14 included a change to the way it handles jar security that for us caused very similar issues. If your jars are signed and work with Java 6u13 or below, you might consider either refactoring your code to work around this update or requiring Java 6u13 or below. Unfortunately I don't recall exactly what we did to resolve the issue - it was panic mode at the time.

Again, if you have the code you have tools to work with. You can put in System.out.println statements in your startup routines - anything console output is displayed in the command window when you run the JNLP from the command line. Otherwise you might consider using a nice logger like log4j to get a better idea of the point of failure.

You may also consider removing the application entirely and downloading it anew. Java Web Start has a Control Panel applet that allows you to see the URL your app is downloading from (could be the wrong one), uninstall the app, set security options, etc.

I had the exact same problem. Turned out that the max-heap-size was set to 1024 and missing the unit. The configuration needed to be max-heap-size=1024m.

So apparently invalid memory configuration in the jnlp file will cause this exact behavior.

In my case, the problem was caused by starting my app from a shortcut on the public desktop (windows 7). As a result, as far as I can tell, the temporary files location was set to c:\users\public\etc. This resulted in the unable to write to cache detail. When I reset to defaults in the temporary files control applet, all worked fine.

In my case, Netbeans automatically creates a .jnlp file that doesn't work and my problem was due to an accidental overwriting of the launch.jnlp file on the server (by the inadequate and incorrect version from Netbeans). This caused a mismatch between the local .jnlp file and the remote .jnlp file, resulting in Java Web Start just quitting after "Verifying application."

So no one else has to waste an hour finding a bug that should be communicated adequately (but isn't) by Java WS.

This can also be due to environment variable CATALINA_HOME in your system. In our organization there were several cases where JNLP applications just refused to start without logging anything and emptying CATALINA_HOME solved the issue.

I had the environment variable set in the command prompt and it didn't appear in GUI. I'm not sure if setx command or register removal commands did the trick. Restart seems to be necessary after removing the variable.

I believe this is a security problem. If I download the jnpl file and execute it after a clean java 8 installation via javaws myfile.jnpl everything is working fine (I get multiple windows where I have to confirm some security problems).

I wanted to share the root cause for my issue. I was using High DPI in Windows and this caused JNLP to not launch. I had to turn off High DPI for this to work. Hope this helps.

Try Java Web Launcher, rather than Java Web Start Launcher. It worked for me.

Right-click on the JNLP file that is not opening and select Open With. In the ‘How you want to open this File’ window, scroll down and click on Look for another app on this PC option. When the File Explorer window opens, navigate to the following location: C:\Program Files (x86)\Java\jre1.8.0_261\bin or the folder for 64bit version

Select javaws.exe and click the Open button. This will open the JNLP file as intended. Make sure to check the Always use this app to open .jnlp files. That's all.

Not the answer you're looking for? Browse other questions tagged java jnlp java-web-start or ask your own question.