I have some old migrated files that contain non-printable characters. I would like to find all files with such names and delete them completely from the system.

Here is an example screenshot of what I'm seeing when I do a ls in such folders: 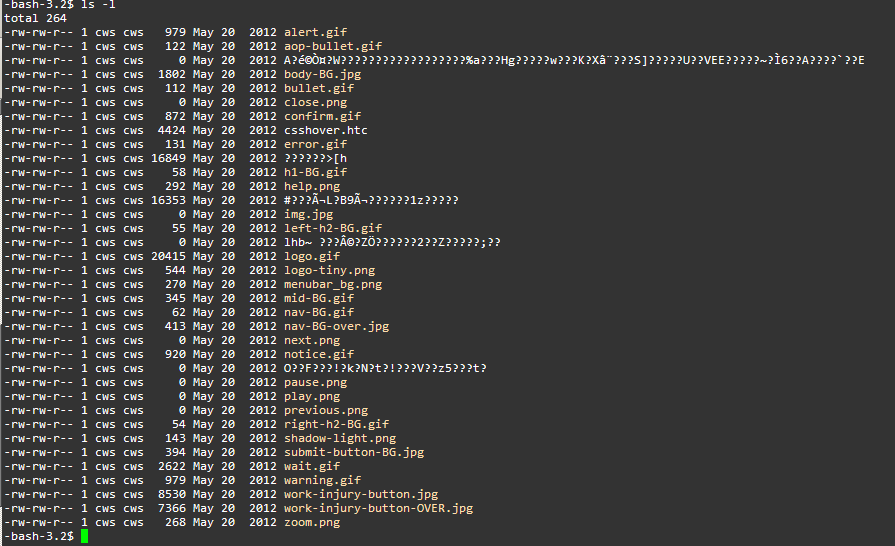 I want to find these files with the non-printable characters and just delete them.

ASCII character codes range from 0x00 to 0x7F in hex. Therefore, any character with a code greater than 0x7F is a non-ASCII character. This includes the bulk of the characters in UTF-8 (ASCII codes are essentially a subset of UTF-8). For example, the Japanese character

is encoded in hex in UTF-8 as

Out of the ASCII codes, 0x00 through 0x1F and 0x7F represent control characters such as ESC (0x1B). These control characters were not originally intended to be printable even though some of them, like the line feed character 0x0A, can be interpreted and displayed.

POSIX provides a very handy collection of character classes for dealing with these types of characters (thanks to bashophil for pointing this out):

For example, a PCRE regex for the Japanese character あ would be

In addition to the POSIX character classes listed above, PCRE also provides the [:ascii:] character class, which is a convenient shorthand for [\x00-\x7F].

GNU's version of grep supports PCRE using the -P flag, but BSD grep (on Mac OS X, for example) does not. Neither GNU nor BSD find supports PCRE regexes.

GNU find supports POSIX regexes (thanks to iscfrc for pointing out the pure find solution to avoid spawning additional processes). The following command will list all filenames (but not directory names) below the current directory that contain non-printable control characters:

The regex is a little complicated because the -regex option has to match the entire file path, not just the filename, and because I'm assuming that we don't want to blow away files with normal names simply because they are inside directories with names containing control characters.

To delete the matching files, simply pass the -delete option to find, after all other options (this is critical; passing -delete as the first option will blow away everything in your current directory):

I highly recommend running the command without the -delete first, so you can see what will be deleted before it's too late.

If you also pass the -print option, you can see what is being deleted as the command runs:

To blow away any paths (files or directories) that contain control characters, the regex can be simplified and you can drop the -type option:

With this command, if a directory name contains control characters, even if none of the filenames inside the directory do, they will all be deleted.

It looks like your files contain both non-ASCII characters and ASCII control characters. As it turns out, [:ascii:] is not a POSIX character class, but it is provided by PCRE. I couldn't find a POSIX regex to do this, so it's Perl to the rescue. We'll still use find to traverse our directory tree, but we'll pass the results to Perl for processing.

To make sure we can handle filenames containing newlines (which seems likely in this case), we need to use the -print0 argument to find (supported on both GNU and BSD versions); this separates records with a null character (0x00) instead of a newline, since the null character is the only character that can't be in a valid filename on Linux. We need to pass the corresponding flag -0 to our Perl code so it knows how records are separated. The following command will print every path inside the current directory, recursively:

Note that this command only spawns a single instance of the Perl interpreter, which is good for performance. The starting path argument (in this case, . for CWD) is optional in GNU find but is required in BSD find on Mac OS X, so I've included it for the sake of portability.

Now for our regex. Here is a PCRE regex matching names that contain either non-ASCII or non-printable (i.e. control) characters (or both):

The following command will print all paths (directories or files) in the current directory that match this regex:

The chomp is necessary because it strips off the trailing null character from each path, which would otherwise match our regex. To delete the matching files and directories, we can use the following:

This will also print out what is being deleted as the command runs (although control characters are interpreted so the output will not quite match the output of ls).

Based on this answer, try:

Note: After files are printed right, remove the # character.

See also: How do I grep for all non-ASCII characters.

By now, you probably have solved your question, but it didn't work well for my case, as I had files that was not being shown by find when I used the -regex switch. So I developed this workaround using ls. Hope it can be useful to someone.

Basically, what worked for me was this:

Breaking it in parts:

This will recursively (-R) list (ls) files under current directory, one file per line (-1), prefixing each file by its inode number (-i). Results will be piped to grep.

Filter each entry considering each input as text (-a), even when it is eventually binary. grep will let a line pass if it contains a character different from the specified in the list. Results will be piped to while.

This while will iterate through all entries, extracting the inode number and passing the inode to find, which will then delete the file.

It is possible to use PCRE with grep -P, just not with find (unfortunately). You can chain find with grep using exec. With PCRE (perl regex), we can use the ascii class and find any char that is non-ascii.

The following exec will not execute unless the first one returns a non-error code. In this case, it means the expression matched the filename. I used sh -c because -exec doesn't like pipes.

You could print only lines containing a backslash with grep:

Not the answer you're looking for? Browse other questions tagged linux bash shell or ask your own question.

400
How do I grep for all non-ASCII characters?
7
How to find non-printable characters in the file?
-1
find files with non-ascii chars in file name

1757
How to redirect and append both standard output and standard error to a file with Bash
507
How to join multiple lines of file names into one with custom delimiter?
737
Find and kill a process in one line using bash and regex
2079
How to change permissions for a folder and its subfolders/files in one step
2465
How can I recursively find all files in current and subfolders based on wildcard matching?
507
Recursively look for files with a specific extension
6465
How do I find all files containing specific text on Linux?
2
Using find to locate files that have non-printable characters in their names