Doctrine Entities and business logic in a Symfony application

Any ideas / feedback are welcome :)

I run into a problem in how to handle business logic around my Doctrine2 entities in a big Symfony2 application. (Sorry for the post length)

After reading many blogs, cookbook and others ressources, I find that :

Ok, I'm totally agree with it, but : where and how handle complex bussiness rules on domain models ?

In a SQL persistence layer, we could modelize these relations as : 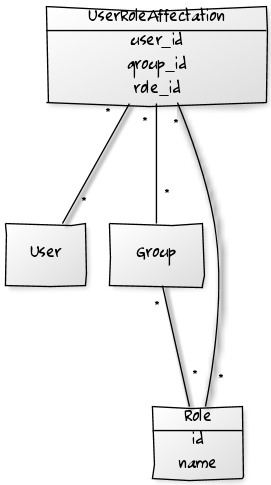 This is a very simple example, but i'd like to kown the best way(s) to manage these business rules.

Use a specific Service class as :

3 - Use Listeners when possible

Use symfony and/or Doctrine event listeners :

Use Entities as sub/parent class of Domain Models classes, which encapsulate lot of Domain logic. But this solutions seems more confused for me.

For you, what is the best way(s) to manage this business logic, focusing on the more clean, decoupled, testable code ? Your feedback and good practices ? Have you concrete examples ?

I find solution 1) as the easiest one to maintain from longer perspective. Solution 2 leads bloated "Manager" class which will eventually be broken down into smaller chunks.

"Too many service classes in a big application" is not a reason to avoid SRP.

In terms of Domain Language, I find the following code similar:

Also from what you described, removing/adding role from group requires many dependencies (dependency inversion principle) and that could be hard with a FAT/bloated manager.

Solution 3) looks very similar to 1) - each subscriber is actually service automatically triggered in background by Entity Manager and in simpler scenarios it can work, but troubles will arise as soon the action (adding/removing role) will require a lot of context eg. which user performed the action, from which page or any other type of complex validation.

See here: Sf2 : using a service inside an entity

Maybe my answer here helps. It just addresses that: How to "decouple" model vs persistance vs controller layers.

In your specific question, I would say that there is a "trick" here... what is a "group"? It "alone"? or it when it relates to somebody?

Initially your Model classes probably could look like this:

UserManager would have methods for getting the model objects (as said in that answer, you should never do a new). In a controller, you could do this:

Then... User, as you say, can have roles, that can be assigned or not.

I have simplified, of course you could add by Id, add by Object, etc.

But when you think this in "natural language"... let's see...

The second is like redundant, as I got the group thru Alice. You can create a new class GroupSpecificToUser which inherits from Group.

Similar to a game... what is a game? The "game" as the "chess" in general? Or the specific "game" of "chess" that you and me started yesterday?

In this case $user->getGroups() would return a collection of GroupSpecificToUser objects.

In any case, you can avoid creating taht weird class and just ask the user about this information, like a $user->getRolesForGroup( $groupId ); approach.

Model is not persistance layer

I like to 'forget' about the peristance when designing. I usually sit with my team (or with myself, for personal projects) and spend 4 or 6 hours just thinking before writing any line of code. We write an API in a txt doc. Then iterate on it adding, removing methods, etc.

A possible "starting point" API for your example could contain queries of anything, like a triangle:

As said in the pointed article, I would also throw events in the model,

For example, when removing a role from a user in a group, I could detect in a "listener" that if that was the last administrator, I can a) cancel the deletion of the role, b) allow it and leave the group without administrator, c) allow it but choose a new admin from with the users in the group, etc or whatever policy is suitable for you.

The same way, maybe a user can only belong to 50 groups (as in LinkedIn). You can then just throw a preAddUserToGroup event and any catcher could contain the ruleset of forbidding that when the user wants to join group 51.

That "rule" can clearly leave outside the User, Group and Role class and leave in a higher level class that contains the "rules" by which users can join or leave groups.

I strongly suggest to see the other answer.

As a personal preference, I like to start simple and grow as more business rules are applied. As such I tend to favour the listeners approach better.

Something that would require lots of mocks/stubs if you have a single service class such as:

I'm in favour of business-aware entities. Doctrine goes a long way not to pollute your model with infrastructure concerns; it uses reflection so you are free to modify accessors as you want. The 2 "Doctrine" things that may remain in your entity classes are annotations (you can avoid them thanks to YML or XML mapping), and the ArrayCollection. This is a library outside of Doctrine ORM (̀Doctrine/Common), so no issues there.

So, sticking to the basics of DDD, entities are really the place to put your domain logic. Of course, sometimes this is not enough, then you are free to add domain services, services without infrastructure concerns.

Doctrine repositories are more middle-ground: I prefer to keep those as the only way to query for entities, event if they are not sticking to the initial repository pattern and I would rather remove the generated methods. Adding manager service to encapsulate all fetch/save operations of a given class was a common Symfony practice some years ago, I don't quite like it.

In my experience, you may come with far more issues with Symfony form component, I don't know if you use it. They will seriously limit your ability to customize the constructor; then you may rather use named constructors. Adding the PhpDoc @deprecated̀ annotation will give your pairs some visual feedback that they should not use the original constructor.

Last but not least, relying too much on Doctrine events will eventually bite you. They are too many technical limitations there, plus I find those hard to keep track of. When needed, I add domain events dispatched from the controller/command to Symfony event dispatcher.

I would consider using a service layer apart from the entities itself. Entities classes should describe the data structures and eventually some other simple calculations. Complex rules go to services.

As long you use services you can create more decoupled systems, services and so on. You can take the advantage of dependency injection and utilize events (dispatchers and listeners) to do the communication between the services keeping them weakly coupled.

I say that on basis of my own experience. In the beginning I used to put all the logic inside the entities classes (specially when I developed symfony 1.x/doctrine 1.x applications). As long the applications grew they got really hard to maintain.

Not the answer you're looking for? Browse other questions tagged php symfony doctrine-orm domain-driven-design or ask your own question.

13
Sf2 : using a service inside an entity
20
Symfony2/Doctrine, having to put business logic in my controller? And duplicating controller?
8
Extending Doctrine Entity in order to add business logic
4
Symfony managing entities