Is ASP.NET MVC 5 incompatible with the WebMatrix SimpleMembershipProvider?

We have an existing application that was build on ASP.NET MVC 4 & Web API. The admin parts of the site use Simple Membership. I'm interested in upgrading the application to MVC 5 / Web API 2, to take advantage of some of the new features that have been added. But it looks like they might be incompatible.

Specifically, after installing the RC packages from NuGet into one of the projects in my solution, and updating the web.config information, the application starts dying during startup on the line that calls WebSecurity.InitializeDatabaseConnection(), with this exception:

Other projects in the same solution using Simple Membership that I have not upgraded continue to work just fine.

Googling around for more information turns up lots of hits for that exception, of course, but nothing particular to WebMatrix.

FWIW: I know that Microsoft has introduced (yet another) membership and identity solution, but unless there's a way to use that with the existing Simple Membership tables, or a seamless migration path for all of our existing user data, that's not really an option for us.

I just tried this again with a fresh checkout of the current trunk of our app. I'm using Visual Studio 2012, but otherwise followed the instructions from MS for upgrading an existing project. After updating to MVC 5 / Web API 2 / EF 6, the app started up an ran just fine.

There were no explicit trust requirements in the web.config to remove. I added the code from this question to Global.asax.cs, and it reports that the app is running with full trust (in IIS Express, just F5-ed from VS).

Re-adding the same call to InitializeDatabaseConnection(), it starts dying with the exact same exception.

Trying the solution in @Kevin's update from Friday, I found that it works. It was really strange to me that adding this apparently unrelated package would solve these security issues, and even more strange after I removed the package from my solution, and it kept working.

So added the helpers package fixed the problem, not because of anything it was doing, but because it was causing updated versions of the broken assemblies to be added to my solution. The solution to the initial incompatibility, then, is to install these new packages when updating everything else from NuGet:

It has been suggested to me that you may also need to manually install the second new package:

This should not be necessary, because this package is an explicit dependency of the first, and NuGet should be smart enough to install both. But if you get an error when building, or don't see NuGet add the dependency, it might help you.

WebMatrix is compatible with MVC 5.

What I did was to take an empty MVC 5 project and incorporate WebMatrix SimpleMembershipProvider into it using SimpleSecurity, an open source project that decouples SimpleMembership from your MVC application. So far I am able to create the database, seed it, and log in and out. I plan on adding other features to this reference application, such as email confirmation and various tests. When I am done I will post the source code in the SimpleSecurity Project

I continued my experiment with adding SimpleMembership to an MVC 5 project and somewhere along the line it broke and I got the same results as @Sixten Otto. I did not test incrementally as I added things but I am suspicious it may have happened when I installed the Web API assemblies. They are not installed by default when creating a new MVC 5 project.

I did some more research on the error and came across this QA titled "Attempt by security transparent method 'WebMatrix.WebData.PreApplicationStartCode.Start()'". This is an old QA and originally someone was getting this same error when upgrading an MVC 3 app to MVC 4. But recently people have been adding answers in regards to upgrading to MVC 5 and one of the answers worked for me. The solution for me was install the NuGet package Microsoft.AspNet.WebHelpers. After installing this package everything worked fine.

A note about my research into migrating to the new ASP.NET Identity is that they do not use the same password hash, which precludes moving old members into a database used by ASP.NET Identity. ASP.NET Identity seems to be in real flux right now so maybe they will come up with a solution for this.

If you are getting the error

In order to fix this install this package using NuGet package manager.

After that , probably you will get another error

to fix this install this package using NuGet package manager.

The above answers worked not until recent webpages 3.2.3. A new issue showed up for me. The current fix for me was by upgrading to .Net 4.5.3. I figured this out of frustration. This issue doesnt just affect MVC 5 but core Webmatrix projects as well after upgrading to webpages 3.2.3. I think it is a framework issue that will be fixed with the new Microsoft Identity. The current fix for me is below: Note: Please use the property pages wizard in visual studio to change your target framework to .Net Framework 4.5.3. It will update your web.config 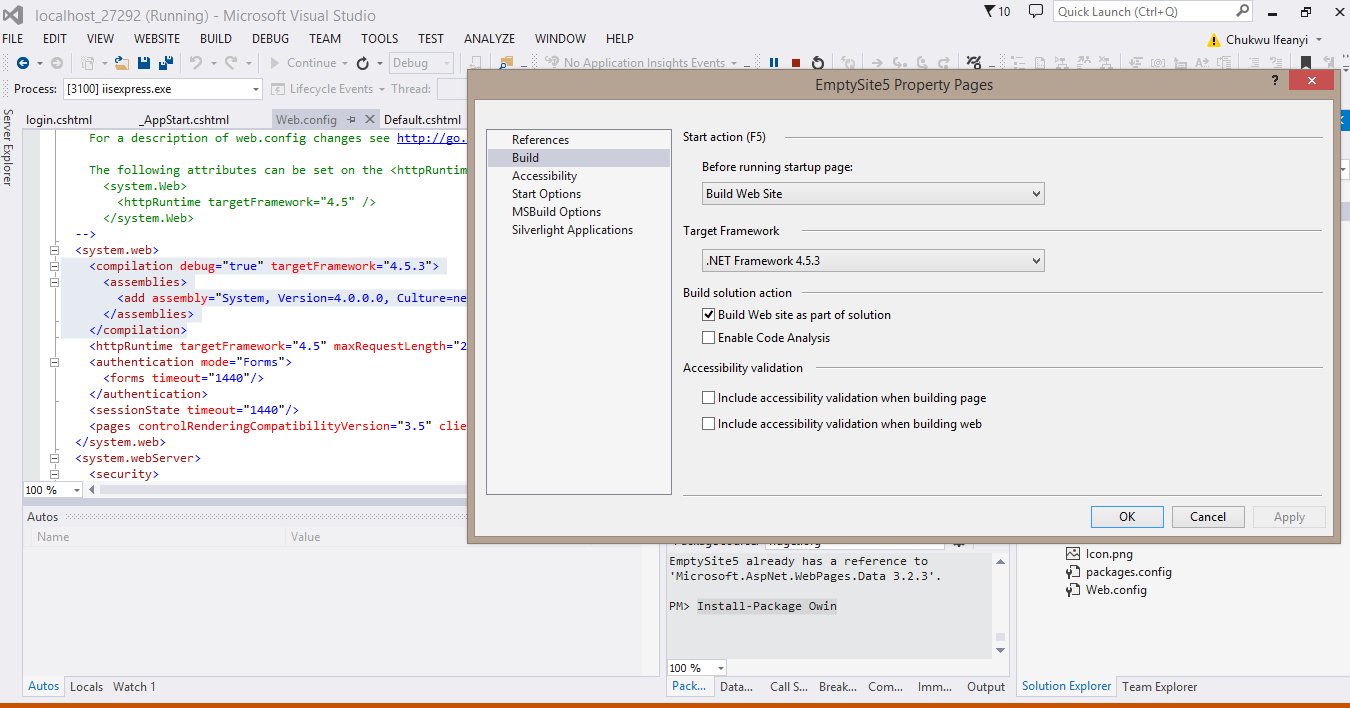 I got same problem, not at my local computer but live site was having that.

I removed below lines from web config and it is working now.

Not the answer you're looking for? Browse other questions tagged c# asp.net-mvc simplemembership asp.net-mvc-5 asp.net-identity or ask your own question.

182
Attempt by security transparent method 'WebMatrix.WebData.PreApplicationStartCode.Start()'
9
Could not load file or assembly 'WebMatrix.Data, Version=3.0.0.0
16
Get current ASP.NET Trust Level programmatically
12
Could not load file or assembly 'System.Web.WebPages.Razor, Version=3.1.1
2
How to confirm a web site is running in full trust?
2
MVC3 Membership Identity with OWIN
2
Simple Membership gives me Unable to find the requested .Net Framework Data Provider
0
In MVC5, where has the configuration site gone?
0
Piranha CMS error on Azure websites

579
Compile Views in ASP.NET MVC
719
How do you create a dropdownlist from an enum in ASP.NET MVC?
766
How do you handle multiple submit buttons in ASP.NET MVC Framework?
370
Could not establish trust relationship for SSL/TLS secure channel -- SOAP
570
How to get ELMAH to work with ASP.NET MVC [HandleError] attribute?
671
ASP.NET MVC - Set custom IIdentity or IPrincipal
862
File Upload ASP.NET MVC 3.0
0
Workflow with MVC 4 - EF 5 - SimpleMembershipProvider
229
Build error: You must add a reference to System.Runtime
154
Source unreachable when using the NuGet Package Manager Console