What's the difference between ASCII and Unicode?

What's the exact difference between Unicode and ASCII?

Is there any size specification for Unicode characters?

Unicode is a superset of ASCII, and the numbers 0–127 have the same meaning in ASCII as they have in Unicode. For example, the number 65 means "Latin capital 'A'".

Understanding why ASCII and Unicode were created in the first place helped me understand the differences between the two.

As stated in the other answers, ASCII uses 7 bits to represent a character. By using 7 bits, we can have a maximum of 2^7 (= 128) distinct combinations*. Which means that we can represent 128 characters maximum.

The last bit (8th) is used for avoiding errors as parity bit. This was relevant years ago.

Most ASCII characters are printable characters of the alphabet such as abc, ABC, 123, ?&!, etc. The others are control characters such as carriage return, line feed, tab, etc.

See below the binary representation of a few characters in ASCII:

ASCII was meant for English only.

What? Why English only? So many languages out there!

Because the center of the computer industry was in the USA at that time. As a consequence, they didn't need to support accents or other marks such as á, ü, ç, ñ, etc. (aka diacritics).

Some clever people started using the 8th bit (the bit used for parity) to encode more characters to support their language (to support "é", in French, for example). Just using one extra bit doubled the size of the original ASCII table to map up to 256 characters (2^8 = 256 characters). And not 2^7 as before (128).

The name for this "ASCII extended to 8 bits and not 7 bits as before" could be just referred as "extended ASCII" or "8-bit ASCII".

As @Tom pointed out in his comment below there is no such thing as "extended ASCII" yet this is an easy way to refer to this 8th-bit trick. There are many variations of the 8-bit ASCII table, for example, the ISO 8859-1, also called ISO Latin-1.

ASCII Extended solves the problem for languages that are based on the Latin alphabet... what about the others needing a completely different alphabet? Greek? Russian? Chinese and the likes?

We would have needed an entirely new character set... that's the rational behind Unicode. Unicode doesn't contain every character from every language, but it sure contains a gigantic amount of characters (see this table).

This answer does a pretty good job at explaining the basics:

UTF-8 uses the ASCII set for the first 128 characters. That's handy because it means ASCII text is also valid in UTF-8.

Source: Wikipedia, this great blog post and Mocki.co where I initially posted this summary.

ASCII has 128 code points, 0 through 127. It can fit in a single 8-bit byte, the values 128 through 255 tended to be used for other characters. With incompatible choices, causing the code page disaster. Text encoded in one code page cannot be read correctly by a program that assumes or guessed at another code page.

Encoding in 16-bits was common when v2 came around, used by Microsoft and Apple operating systems for example. And language runtimes like Java. The v2 spec came up with a way to map those 1.1 million code points into 16-bits. An encoding called UTF-16, a variable length encoding where one code point can take either 2 or 4 bytes. The original v1 code points take 2 bytes, added ones take 4.

Another variable length encoding that's very common, used in *nix operating systems and tools is UTF-8, a code point can take between 1 and 4 bytes, the original ASCII codes take 1 byte the rest take more. The only non-variable length encoding is UTF-32, takes 4 bytes for a code point. Not often used since it is pretty wasteful. There are other ones, like UTF-1 and UTF-7, widely ignored.

An issue with the UTF-16/32 encodings is that the order of the bytes will depend on the endian-ness of the machine that created the text stream. So add to the mix UTF-16BE, UTF-16LE, UTF-32BE and UTF-32LE.

Having these different encoding choices brings back the code page disaster to some degree, along with heated debates among programmers which UTF choice is "best". Their association with operating system defaults pretty much draws the lines. One counter-measure is the definition of a BOM, the Byte Order Mark, a special codepoint (U+FEFF, zero width space) at the beginning of a text stream that indicates how the rest of the stream is encoded. It indicates both the UTF encoding and the endianess and is neutral to a text rendering engine. Unfortunately it is optional and many programmers claim their right to omit it so accidents are still pretty common.

java provides support for Unicode i.e it supports all world wide alphabets. Hence the size of char in java is 2 bytes. And range is 0 to 65535. 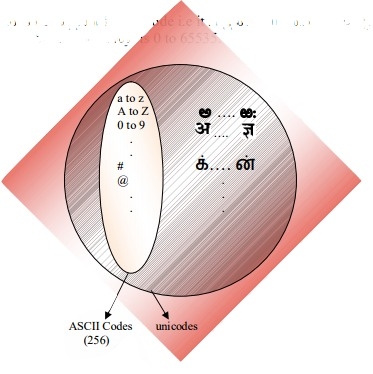 Unicode has 1,114,112 code positions. About 100,000 of them have currently been allocated to characters, and many code points have been made permanently noncharacters (i.e. not used to encode any character ever), and most code points are not yet assigned.

The only things that ASCII and Unicode have in common are: 1) They are character codes. 2) The 128 first code positions of Unicode have been defined to have the same meanings as in ASCII, except that the code positions of ASCII control characters are just defined as denoting control characters, with names corresponding to their ASCII names, but their meanings are not defined in Unicode.

Sometimes, however, Unicode is characterized (even in the Unicode standard!) as “wide ASCII”. This is a slogan that mainly tries to convey the idea that Unicode is meant to be a universal character code the same way as ASCII once was (though the character repertoire of ASCII was hopelessly insufficient for universal use), as opposite to using different codes in different systems and applications and for different languages.

ASCII and Unicode are two character encodings. Basically, they are standards on how to represent difference characters in binary so that they can be written, stored, transmitted, and read in digital media. The main difference between the two is in the way they encode the character and the number of bits that they use for each. ASCII originally used seven bits to encode each character. This was later increased to eight with Extended ASCII to address the apparent inadequacy of the original. In contrast, Unicode uses a variable bit encoding program where you can choose between 32, 16, and 8-bit encodings. Using more bits lets you use more characters at the expense of larger files while fewer bits give you a limited choice but you save a lot of space. Using fewer bits (i.e. UTF-8 or ASCII) would probably be best if you are encoding a large document in English.

One of the main reasons why Unicode was the problem arose from the many non-standard extended ASCII programs. Unless you are using the prevalent page, which is used by Microsoft and most other software companies, then you are likely to encounter problems with your characters appearing as boxes. Unicode virtually eliminates this problem as all the character code points were standardized.

Another major advantage of Unicode is that at its maximum it can accommodate a huge number of characters. Because of this, Unicode currently contains most written languages and still has room for even more. This includes typical left-to-right scripts like English and even right-to-left scripts like Arabic. Chinese, Japanese, and the many other variants are also represented within Unicode. So Unicode won’t be replaced anytime soon.

In order to maintain compatibility with the older ASCII, which was already in widespread use at the time, Unicode was designed in such a way that the first eight bits matched that of the most popular ASCII page. So if you open an ASCII encoded file with Unicode, you still get the correct characters encoded in the file. This facilitated the adoption of Unicode as it lessened the impact of adopting a new encoding standard for those who were already using ASCII.

Given numbers are only for storing 1 character 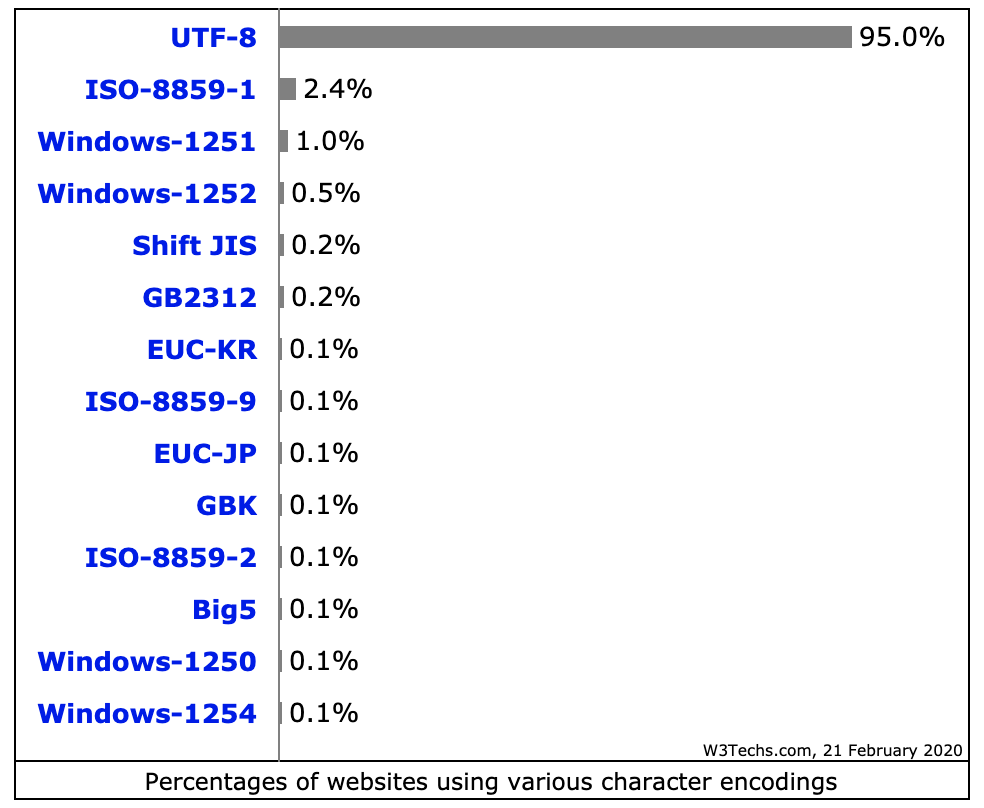 ASCII defines 128 characters, as Unicode contains a repertoire of more than 120,000 characters.

Beyond how UTF is a superset of ASCII, another good difference to know between ASCII and UTF is in terms of disk file encoding and data representation and storage in random memory. Programs know that given data should be understood as an ASCII or UTF string either by detecting special byte order mark codes at the start of the data, or by assuming from programmer intent that the data is text and then checking it for patterns that indicate it is in one text encoding or another.

Using the conventional prefix notation of 0x for hexadecimal data, basic good reference is that ASCII text starts with byte values 0x00 to 0x7F representing one of the possible ASCII character values. UTF text is normally indicated by starting with the bytes 0xEF 0xBB 0xBF for UTF8. For UTF16, start bytes 0xFE 0xFF, or 0xFF 0xFE are used, with the endian-ness order of the text bytes indicated by the order of the start bytes. The simple presence of byte values that are not in the ASCII range of possible byte values also indicates that data is probably UTF.

There are other byte order marks that use different codes to indicate data should be interpreted as text encoded in a certain encoding standard.

Not the answer you're looking for? Browse other questions tagged unicode ascii or ask your own question.

272
What is the difference between a "line feed" and a "carriage return"?
30
Symbol not displaying properly
9
Is there a drastic difference between UTF-8 and UTF-16
0
What is this line of Java code doing?
4
Java or Scala. How to convert characters like \x22 into String
5
What are the ramifications of storing UTF8 text in a Latin1 database?
-1
How does C distinguish between a byte long character and a 2 byte long character?
2
C# User Input Into Byte Array
3
Include Unicode Signature (BOM) in HTML files or not?
1
C++ Literals and Unicode
See more linked questions