Difference between core and processor

What is the difference between a core and a processor?

I've already looked for it on Google, but I only get definitions for multi-core and multi-processor, which is not what I am looking for.

A core is usually the basic computation unit of the CPU - it can run a single program context (or multiple ones if it supports hardware threads such as hyperthreading on Intel CPUs), maintaining the correct program state, registers, and correct execution order, and performing the operations through ALUs. For optimization purposes, a core can also hold on-core caches with copies of frequently used memory chunks.

A CPU may have one or more cores to perform tasks at a given time. These tasks are usually software processes and threads that the OS schedules. Note that the OS may have many threads to run, but the CPU can only run X such tasks at a given time, where X = number cores * number of hardware threads per core. The rest would have to wait for the OS to schedule them whether by preempting currently running tasks or any other means.

In addition to the one or many cores, the CPU will include some interconnect that connects the cores to the outside world, and usually also a large "last-level" shared cache. There are multiple other key elements required to make a CPU work, but their exact locations may differ according to design. You'll need a memory controller to talk to the memory, I/O controllers (display, PCIe, USB, etc..). In the past these elements were outside the CPU, in the complementary "chipset", but most modern design have integrated them into the CPU.

In addition the CPU may have an integrated GPU, and pretty much everything else the designer wanted to keep close for performance, power and manufacturing considerations. CPU design is mostly trending in to what's called system on chip (SoC).

This is a "classic" design, used by most modern general-purpose devices (client PC, servers, and also tablet and smartphones). You can find more elaborate designs, usually in the academy, where the computations is not done in basic "core-like" units.

An image may say more than a thousand words:

* Figure describing the complexity of a modern multi-processor, multi-core system.

Let's clarify first what is a CPU and what is a core, a central processing unit CPU, can have multiple core units, those cores are a processor by itself, capable of execute a program but it is self contained on the same chip.

In the past one CPU was distributed among quite a few chips, but as Moore's Law progressed they made to have a complete CPU inside one chip (die), since the 90's the manufacturer's started to fit more cores in the same die, so that's the concept of Multi-core.

In these days is possible to have hundreds of cores on the same CPU (chip or die) GPUs, Intel Xeon. Other technique developed in the 90's was simultaneous multi-threading, basically they found that was possible to have another thread in the same single core CPU, since most of the resources were duplicated already like ALU, multiple registers.

So basically a CPU can have multiple cores each of them capable to run one thread or more at the same time, we may expect to have more cores in the future, but with more difficulty to be able to program efficiently.

CPU is a central processing unit. Since 2002 we have only single core processor i.e. we will only perform a single task or a program at a time.

For having multiple programs run at a time we have to use the multiple processor for executing multi processes at a time so we required another motherboard for that and that is very expensive.

So, Intel introduced the concept of hyper threading i.e. it will convert the single CPU into two virtual CPUs i.e we have two cores for our task. Now the CPU is single, but it is only pretending (masqueraded) that it has a dual CPU and performs multiple tasks. But having real multiple cores will be better than that so people develop making multi-core processor i.e. multiple processors on a single box i.e. grabbing a multiple CPU on single big CPU. I.e. multiple cores.

In the early days...like before the 90s...the processors weren't able to do multi tasks that efficiently...coz a single processor could handle just a single task...so when we used to say that my antivirus,microsoft word,vlc,etc. softwares are all running at the same time...that isn't actually true. When I said a processor could handle a single process at a time...I meant it. It actually would process a single task...then it used to pause that task...take another task...complete it if its a short one or again pause it and add it to the queue...then the next. But this 'pause' that I mentioned was so small (appx. 1ns) that you didn't understand that the task has been paused. Eg. On vlc while listening to music there are other apps running simultaneously but as I told you...one program at a time...so the vlc is actually pausing in between for ns so you dont underatand it but the music is actually stopping in between.

But this was about the old processors...

Eg. A i7 6gen processor has 8 cores...ie 8 mini processors in 1 i7...ie its speed is 8x times the old processors. And this is how multi tasking can be done.

There could be hundreds of cores in a single processor Eg. Intel i128.

I hope I explaned this well.

I have read all answers, but this link was more clear explanation for me about difference between CPU(Processor) and Core. So I'm leaving here some notes from there.

The main difference between CPU and Core is that the CPU is an electronic circuit inside the computer that carries out instruction to perform arithmetic, logical, control and input/output operations while the core is an execution unit inside the CPU that receives and executes instructions. 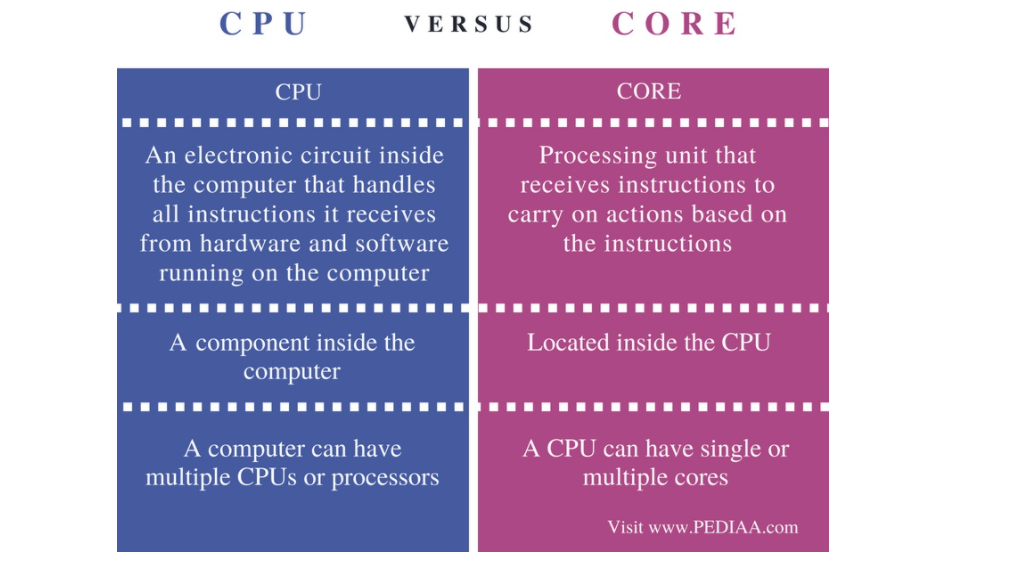 Intel's picture is helpful, as shown by Tortuga's best answer. Here's a caption for it.

Processor: One semiconductor chip, the CPU (central processing unit) seated in one socket, circa 1950s-2010s. Over time, more functions have been packed onto the CPU chip. Prior to the 1950s releases of single-chip processors, one processor might have spread across multiple chips. In the mid 2010s the system-on-a-chip chips made it slightly more sketchy to equate one processor to one chip, though that's generally what people mean by processor, as in "this computer has an i7 processor" or "this computer system has four processors."

Not the answer you're looking for? Browse other questions tagged cpu core cpu-architecture or ask your own question.

2
How many cores on this machine?
2
SimpleAsyncTaskExecutor fires up only 8 threads
1
Is my understanding of processors, cores, threads and parallelism correct?
1
Thread programming in vmware, 'process scheduling' didn't happen
0
Why can't x86 be abstracted by device driver?
0
Processors vs cores
1
Detecting CPU and Core information from my Intel System