How to avoid refreshing of cells on when calling notifyDataSetChanged() for PinterestLikeAdapterView?

I'm using the PinterestLikeAdapterView library to show some images from the internet, which is like a gridView but with different height for each cell.

Since I use this library to show images from the internet, it's crucial that when calling notifyDatasetChanged won't cause a mess on the views.

This makes the whole grid to refresh its images, and so it ruins the UX.

Usually, in both gridView and listView, the way to overcome refreshing is to put the position that was used for the view inside the viewHolder, and if they are equal, it means that they still match.

However, here they re-use other views in a different order so this trick won't work here.

Because of this issue, not only i get refreshes of almost all of the visible views, but since i use DiskCacheLru library, it crashes since it tries to put 2 identical inputSteam data into the same key using 2 threads.

What can I do? Is this a known bug in the library?

for now, i use memory cache to at least get items that were cached before, but that's more like a "cure" than a "vaccine"...

Use an image loading library like Picasso that caches most recently used images in memory, so they don't need to be reloaded from the network.

AdapterView does something called View recycling, where Views which are no longer needed to display a position are re-used to display another. (For example, as you scroll down, Views that disappear off the top of the screen are reused for new positions at the bottom of the screen.) Because of this, it's normal for getView() to be passed the same View for more than one position.

This is done for performance reasons: Inflating new Views is hard and takes time, so AdapterView tries to do it as infrequently as possible.

When using a holder, you store references to ImageView and TextView children inside the item's View, so you don't have to look them up with findViewById() each time - you don't usually store anything specific to a particular position, because the View and its holder will often be used for different positions.

Now, when you call notifyDataSetChanged(), AdapterView assumes that the data set has completely changed. The image that was associated with position 8 may no longer be present, or it may be associated with position 12 now. Consequently, all the existing Views are scrapped - but because AdapterView would still like to avoid inflating new Views, they're re-used to display the new data, with no regard for what position they were displaying previously.

This explains why getView() is being passed the same View for different positions, and why visible positions are being refreshed when you call notifyDataSetChanged(). But how to avoid having your images refresh, ruining the user experience?

Use an image loading library like Picasso that caches most recently used images in memory, so they don't need to be reloaded from the network. The refresh will still happen, but it'll be instantaneous.

View getView(int position, View view, ViewGroup parent) will be always called ascendingly, after notifyDataSetChanged().
I guess that, the order of finishing download task will cause this problem.
As you mentioned in your question, keeping the position is a good way to avoid this problem.

Here is another way to solve it, also re-use the imageviews.

There is a very good example on PinterestLikeListView in GitHub

Here is the library StaggeredGridView

You can get library project here library

and you can get Demo project Here

This is very good open source project, so you can use instead of PinterestLikeAdapterView 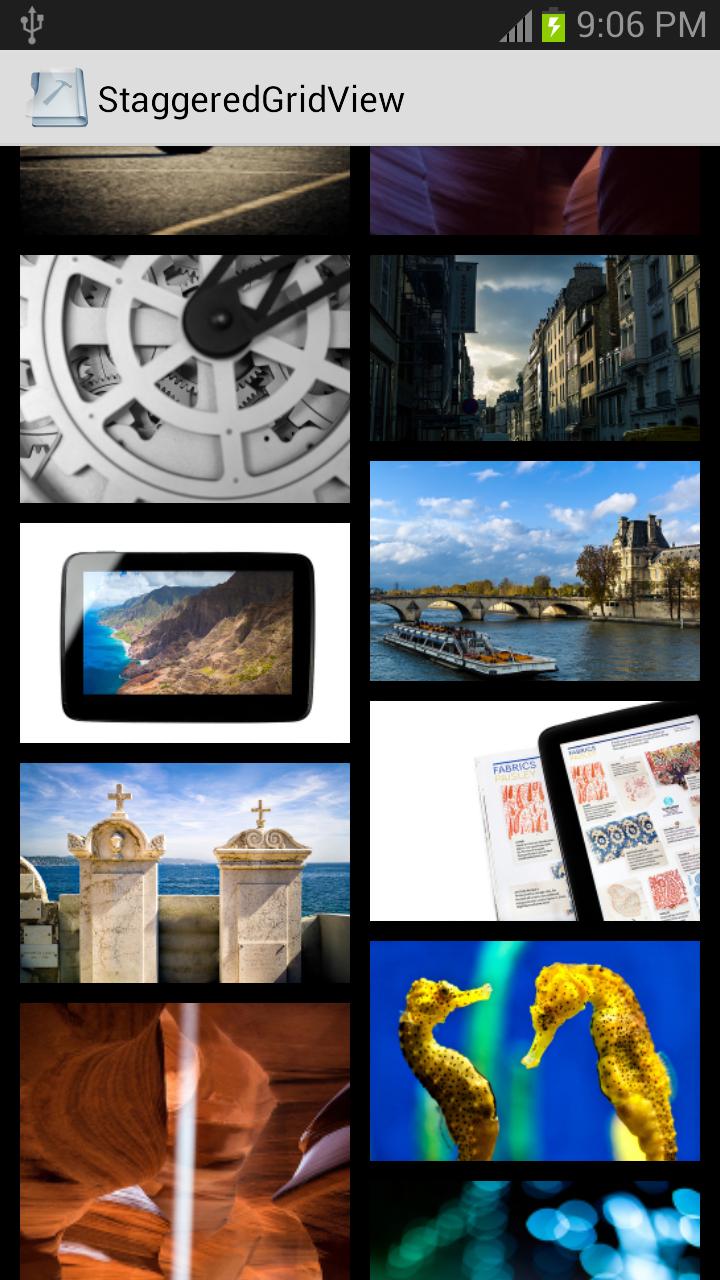 Hope this library is going to help you out.

seems that the authors of this library have fixed it, after some time i've reported about it:

Not the answer you're looking for? Browse other questions tagged android android-gridview pinterest notifydatasetchanged or ask your own question.

0
how to remove an item from gridview using baseadapter without refreshing all items
493
Android webview launches browser when calling loadurl
805
How to avoid reverse engineering of an APK file?
118
Android ListView not refreshing after notifyDataSetChanged
0
GridView doesn't load images of first visible set
2
My GridView/ListView gets rendered only after touch in android api 18+
457
Mipmap drawables for icons
3
How to handle clicks on the rows of listView, while notifyDataSetChanged might be called?