A Windows 7 developer machine with VS 2008 Pro SP1 and the VS2008 Team Explorer (no SP). The TFS 2008 Service Pack 1 didn't work for me - "None of the products that are addressed by this software update are installed on this computer."

The developer machine is able to browse the TFS site at the above URL.

The Issue is around trying to add the TFS server into the Team Explorer window in Visual Studio 2008. Here's a screenshot showing the error:

The TFS server is up and running properly. Firewall ports are open, and is accessible via the browser on the dev machine!!

Here's how I solved this problem:

Check out this article 'Connecting VS2008 to any TFS2010 Project Collection'.

To Connect Visual Studio 2008 to a TFS2010 server this is what it took for me to connect: Install TFS plugin; install VS2008SP1; install TFS compatibility update. Before I did this I was getting an error tf3002 Here are some details:

Also when I opened the Connect to TFS window (Tools --> Connect to TFS). After I entered in the complete path such as http://YourServerName:8080/so/TFSProjects including the http://. Also I noticed that when it's installed correctly on the Add TFS window when the http:// is typed in the Port # txtbox will be disabled. This question helped me & I Hope this answer helps. 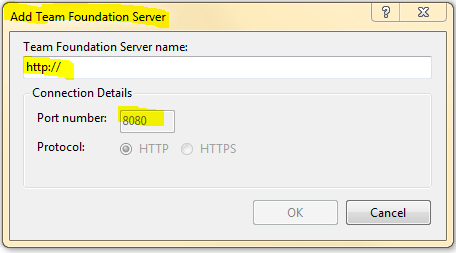