How to use the Implements in Excel VBA

I'm trying to implement some shapes for an engineering project and abstract it out for some common functions so that I can have a generalized program.

My code is below:

The problem is that whenever I run my test cases, it comes up with the following error:

This is an esoteric OOP concept and there's a little more you need to do and understand to use a custom collection of shapes.

You may first want to go through this answer to get a general understanding of classes and interfaces in VBA.

First open Notepad and copy-paste the below code

Save the file as ShapesCollection.cls to your desktop.

Make sure you are saving it with the *.cls extension and not ShapesCollection.cls.txt

Now open you Excel file, go to VBE ALT+F11 and right click in the Project Explorer. Select Import File from the drop-down menu and navigate to the file. 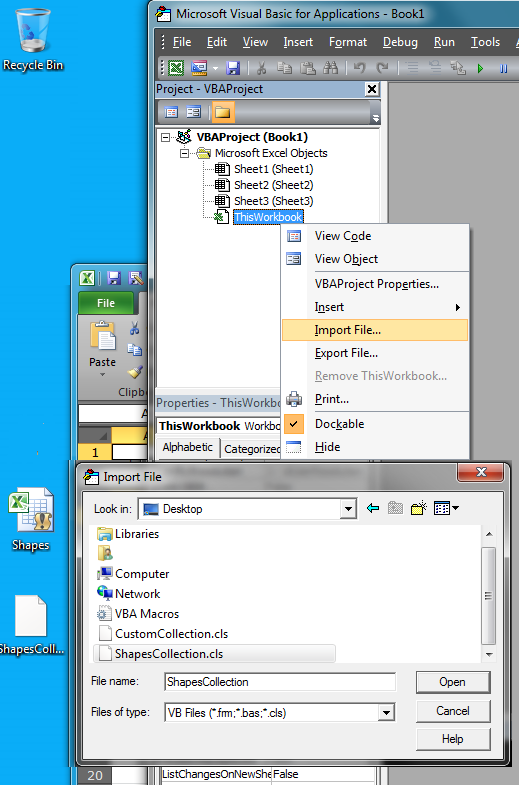 NB: You needed to save the code in a .cls file first and then import it because VBEditor does not allow you to use Attributes. The attributes allow you to specify the default member in the iteration and use the for each loop on custom collection classes

cShape this is your Interface

In your ShapesCollection class module there are 2 subs for adding items to the collection.

The first method Public Sub Add(ByVal Item As Object) simply takes a class instance and adds it to the collection. You can use it in your Module1 like this

The Public Sub AddShapes(ParamArray arr() As Variant) allows you to add multiple objects at the same time separating them by a , comma in the same exact way as the AddShapes() Sub does.

It's quite a better design than adding each object separately, but it's up to you which one you are going to go for.

Notice how I have commented out some code in the loop

If you remove comments from the 'If and 'End If lines you will be able to print only the cCircle objects. This would be really useful if you could use delegates in VBA but you can't so I have shown you the other way to print only one type of objects. You can obviously modify the If statement to suit your needs or simply print out all objects. Again, it is up to you how you are going to handle your data :)

Here are some theoretical and practical contributions to the answers given, in case people arrive here who wonder what implements / interfaces are about.

As we know, VBA doesn't support inheritance, hence we might almost blindly use interfaces to implement common properties/behaviour across different classes.
Still, I think that it is useful to describe what the conceptual difference is between the two to see why it matters later on.

Inheritance means that a baseclass (some physical or conceptual archetype) is extended, whereas interfaces implement a set of properties/methods that define a certain behaviour.
As such, one would say that Shape is a base class from which all other shapes inherit, one that may implement the drawable interface to make all shapes drawable. This interface would be a contract that guarantees that every Shape has a draw method, specifying how/where a shape should be drawn: a circle may - or may not - be drawn differently from a square.

Since VBA doesn't support inheritance, we are automatically forced to opt for creating an interface IShape that guarantees certain properties/behaviour to be implemented by the generic shapes (square, circle, etc), rather than creating an abstract Shape baseclass from which we can extend.

The part where we get in trouble is when we want to make every Shape drawable.
Unfortunately, since IShape is an interface and not a base class in VBA, we cannot implement the drawable interface in the base class. It appears that VBA does not allow us to have one interface implement another; after having tested this, the compiler doesn't seem to provide the desired behaviour. In other words, we cannot implement IDrawable within IShape, and expect instances of IShape to be forced to implement IDrawable methods because of this.
We are forced to implement this interface to every generic shape class that implements the IShape interface, and luckily VBA allows multiple interfaces to be implemented.

The part that follows now is where the typical use / benefits of an interface come into play.

Let's start off our code by writing a factory that returns a new square. (This is just a workaround for our inability to send arguments directly to the constructor):

Our main code will use the factory to create a new Square: 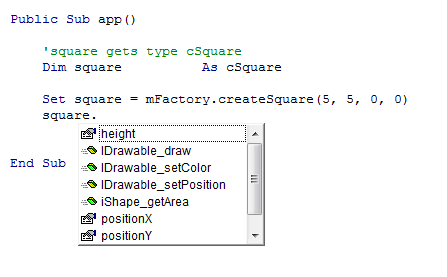 We'll see later on why this is relevant.

Now you should wonder what will happen if you really want to create a collection of drawable objects. Your app could happen to contain objects that aren't shapes, but that are yet drawable. Theoretically, nothing prevents you from having an IComputer interface that can be drawn (may be some clipart or whatever).
The reason why you might want to have a collection of drawable objects, is because you may want to render them in a loop at a certain point in the app lifecycle.

In this case I will write a decorator class that wraps a collection (we'll see why). class collDrawables:

The decorator allows you to add some convenience methods that native vba collections don't provide, but the actual point here is that the collection will only accept objects that are drawable (implement the IDrawable interface). If we would try to add an object that is not drawable, a type mismatch would be thrown (only drawable objects allowed!).

Note that the above code adds a lot of transparency: we declared the objects as IDrawable, which makes it transparent that the loop will never fail, since the draw method is available on all objects within the collection.
If we would try to add a Person to the collection, it would throw a type mismatch if this Person class did not implement the drawable interface.

Not only are we certain that square_1 has a draw method, but it also ensure that only methods defined by IDrawable get exposed.
For a square, the benefit of this might not be immediately clear, but let's have a look at an analogy from the Java collections framework that is much clearer.

Imagine that you have a generic interface called IList that defines a set of methods applicable on different types of lists. Each type of list is a specific class that implements the IList interface, defining their own behaviour, and possibly adding more methods of their own on top.

In the above code, declaring the list as IList ensures that you won't use ArrayList-specific methods, but only methods that are prescribed by the interface. Imagine that you declared the list as follows:

You will have access to the public methods that are specifically defined on the ArrayList class. Sometimes this might be desired, but often we just want to take benefit of the internal class behaviour, and not defined by the class specific public methods.
The benefit becomes clear if we use this ArrayList 50 more times in our code, and suddenly we find out that we're better off using a LinkedList (which allows specific internal behaviour related to this type of List).

If we complied to the interface, we can change the line:

and none of the other code will break as the interface makes sure that the contract is fulfilled, ie. only public methods defined on IList are used, so the different types of lists are swappable over time.

We can define an interface in the following way:

and a class that implements the draw method as well:

We can switch between the implementations the following way:

This is not possible if you declare the variable as cSquare.
I can't immediately think of a good example when this might be useful, but it is technically possible if you test it.

There are two undocumented additions about VBA and "Implements" statement.

We must implement all methods of interface in the class which it is used.

If the interface ISomeInterface has:

That said, the other answers are very much worth reading.

Not the answer you're looking for? Browse other questions tagged excel vba interface or ask your own question.

24
How to use comparison methods between class object modules in VBA in a similar manner as VB.NET?
13
VBA: is there something like Abstract Class?
9
VBA difference between public variable and property
11
Implementing my own interface in VBA - Error: Object module needs to implement 'x' for interface 'y'
8
How to implement custom iterable class in VBA
7
Array already dimensioned - Class module
7
c# enumerable class - compatible with VBA
2
Creating Nested Class
4
Excel VBA: Why “Sheets” collection is not a “Collection”?
4
VBA, Excel how to set particular styles without using their names?
See more linked questions

642
C# Interfaces. Implicit implementation versus Explicit implementation
1938
How do I create an Excel (.XLS and .XLSX) file in C# without installing Microsoft Office?
759
How do I properly clean up Excel interop objects?
501
Is there a way to crack the password on an Excel VBA Project?
584
How to determine if a type implements an interface with C# reflection
184
Excel VBA - exit for loop
548
How to avoid using Select in Excel VBA
735
Implements vs extends: When to use? What's the difference?
616
How to use Regular Expressions (Regex) in Microsoft Excel both in-cell and loops