What is difference between MVC, MVP & MVVM design pattern in terms of coding c#

Use in situations where binding via a "dataContext" is not possible. Windows Forms is a perfect example of this. In order to separate the view from the model, a presenter is needed. Since the view cannot directly bind to the presenter, information must be passed to the view via an interface (IView).

Use in situations where binding via a "dataContext" is possible. Why? The various IView interfaces for each view are removed which means less code to maintain. Some examples where MVVM is possible to include WPF and javascript projects using Knockout.

Use in situations where the connection between the view and the rest of the program is not always available (and you can’t effectively employ MVVM or MVP). This clearly describes the situation where a web API is separated from the data sent to the client browsers. Microsoft’s ASP.NET MVC is a great tool for managing such situations and provides a very clear MVC framework

But I have not found a single article which discusses the difference theoretically along with sample code.

It would be really nice if I get an article that discusses the difference between these 3 design patterns (MVC, MVP & MVVM) along with code.

So if any such article exists which discusses how code would look different for these 3 design patterns (MVC, MVP & MVVM) then please redirect me to that article.

Some basic differences can be written in short:

Traditional MVC is where there is a

Similar to traditional MVC but Controller is replaced by Presenter. But the Presenter, unlike Controller is responsible for changing the view as well. The view usually does not call the presenter.

The difference here is the presence of View Model. It is kind of an implementation of Observer Design Pattern, where changes in the model are represented in the view as well, by the VM. Eg: If a slider is changed, not only the model is updated but the data which may be a text, that is displayed in the view is updated as well. So there is a two-way data binding.

MVP (more modular because of its low-coupling. Presenter is a mediator between the View and Model)

MVVM (You already have two-way binding between VM and UI component, so it is more automated than MVP)

The input is directed at the Controller first, not the view. That input might be coming from a user interacting with a page, but it could also be from simply entering a specific url into a browser. In either case, its a Controller that is interfaced with to kick off some functionality.

There is a many-to-one relationship between the Controller and the View. That’s because a single controller may select different views to be rendered based on the operation being executed.

There is one way arrow from Controller to View. This is because the View doesn’t have any knowledge of or reference to the controller.

The Controller does pass back the Model, so there is knowledge between the View and the expected Model being passed into it, but not the Controller serving it up.

Now let’s look at the MVP pattern. It looks very similar to MVC, except for some key distinctions:

The input begins with the View, not the Presenter.

There is a one-to-one mapping between the View and the associated Presenter.

The View holds a reference to the Presenter. The Presenter is also reacting to events being triggered from the View, so its aware of the View its associated with.

The Presenter updates the View based on the requested actions it performs on the Model, but the View is not Model aware.

So with the MVC and MVP patterns in front of us, let’s look at the MVVM pattern and see what differences it holds:

The input begins with the View, not the View Model.

While the View holds a reference to the View Model, the View Model has no information about the View. This is why its possible to have a one-to-many mapping between various Views and one View Model…even across technologies. For example, a WPF View and a Silverlight View could share the same View Model.

Presenter will be present in between Model and view.Presenter will fetch data from Model and will do manipulations for data as view wants and give it to view and view is responsible only for rendering.

1)We can't use presenter for multiple modules because data is being modified in presenter as desired by one view class.

3)Breaking Clean architecture because data flow should be only outwards but here data is coming back from presenter to View.

Here we have Controller in between view and model.Here data request will be done from controller to view but data will be sent back to view in form of interface but not with controller.So,here controller won't get bloated up because of many transactions.

Data Manipulation should be done by View as it wants and this will be extra work on UI thread which may effect UI rendering if data processing is more.

After announcing Architectural components,we got access to ViewModel which provided us biggest advantage i.e it's lifecycle aware.So,it won't notify data if view is not available.It is a clean architecture because flow is only in forward mode and data will be notified automatically by LiveData. So,it is Android's recommended architecture.

Even MVVM has a disadvantage. Since it is a lifecycle aware some concepts like alarm or reminder should come outside app.So,in this scenario we can't use MVVM.

The image below is from the article written by Erwin van der Valk: 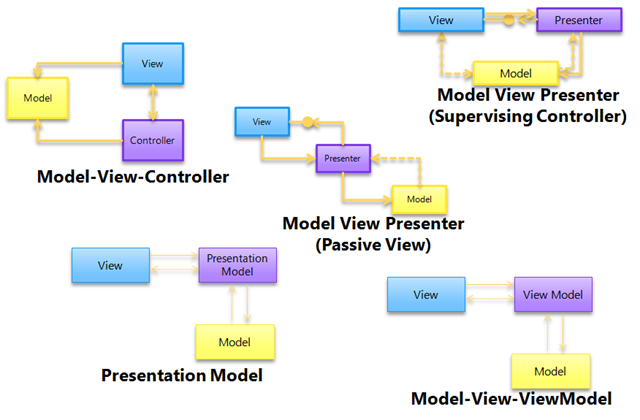 MVC vs MVP vs MVVM

Sometimes in UI world(iOS, Android) you can find additional object(Router, Navigator, Coordinator) which is responsible for navigation and setting dependencies

2335
What are MVP and MVC and what is the difference?
62
What are the differences between Presenter, Presentation Model, ViewModel and Controller?
6
Clean architecture pattern Android
2
Android MVP for complex activity
-3
Is WPF the best solution for C# GUIs?
2
Some confusion about MVP and MVVM
0
Should a controller access UI components?
1
What exactly am I using?
0
How do I display an instance that inherits from Picturebox and other classes in a form during runtime?
0
Confusion in architecture used
See more linked questions