Using the Copy target in the targets file to copy required libraries won't copy those files to other projects which reference the project, resulting in a DllNotFoundException. This can be done with a much simpler targets file though, using a None element, as MSBuild will copy all None files to referencing projects.

The same x86 and x64 directories will be created in the project's output directory when built. If you don't need subdirectories then the ** and the %(RecursiveDir) can be removed and instead include the required files in the build directory directly. Other required content files can also be added in the same way.

The files added as None in the targets file won't be shown in the project when open in Visual Studio. If you are wondering why I don't use the Content folder in the nupkg it's because there's no way to set the CopyToOutputDirectory element without using a powershell script (which will only be run inside Visual Studio, not from the command prompt, on build servers or in other IDEs, and is not supported in project.json / xproj DNX projects) and I prefer to use a Link to the files rather than having an additional copy of the files within the project.

Update: Although this should also work with Content rather than None it appears that there's a bug in msbuild so files won't be copied to referencing projects more than one step removed (e.g. proj1 -> proj2 -> proj3, proj3 won't get the files from proj1's NuGet package but proj2 will).

Here is an alternative that uses the .targets to inject the native DLL in the project with the following properties.

The main benefit of this technique is that the native DLL is copied into the bin/ folder of dependent projects transitively.

See the layout of the .nuspec file: 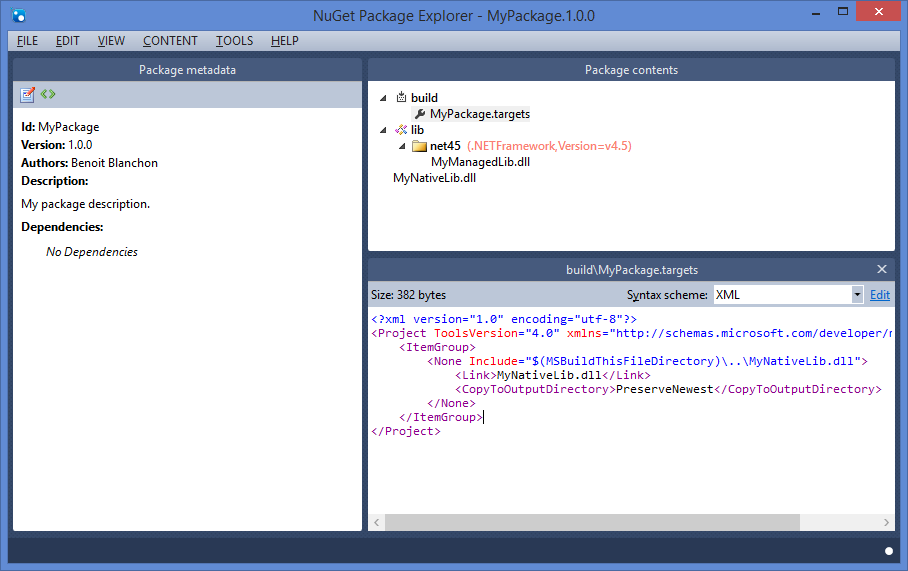 Here is the .targets file:

This inserts the MyNativeLib.dll as if it was part of the original project (but curiously the file is not visible in Visual Studio).

Notice the <Link> element that sets the destination file name in the bin/ folder.

I had recently the same problem when I tried to build an EmguCV NuGet package including both managed assemblies and non-managed shared liraries (which also had to be placed in a x86 subdirectory) which had to be copied automatically to the build output directory after each build.

Here is a solution I came up with, that relies on only NuGet and MSBuild:

The above .targets file will be injected on an installation of the NuGet package in the target project file and is responsible for copying the native libraries to the output directory.

However, this solution still would not copy the native binaries to the output directory of another project referencing the one which initially includes the NuGet package. You still have to reference the NuGet package in your "final" project as well.

If anyone else stumbles across this.

The .targets filename MUST equal the NuGet Package Id

Anything else wont work.

I should've read more thoroughly as its actually noted here. Took me ages..

It's a bit late but I've created a nuget package exaclty for that.

The idea is to have an additional special folder in your nuget package. I'm sure you already know Lib and Content. The nuget package I've created looks for a Folder named Output and will copy everything which is in there to the projects output folder.

The only thing you have to do is add a nuget dependency to the package http://www.nuget.org/packages/Baseclass.Contrib.Nuget.Output/

There's a pure C# solution which I find rather easy to use and I don't have to bother with NuGet limitations. Follow these steps:

Include the native library in your project and set its Build Action property to Embedded Resource.

Paste the following code into class where you PInvoke this library.

Call this method from the static constructor like as follows UnpackNativeLibrary("win32"); and it will unpack the library to disk just before you need it. Of course, you need to be sure that you have write permissions to that part of the disk.

This is an old question, but I have the same problem now, and I found a turnaround that is a little tricky but very simple and effective: create in the Nuget standard Content folder the following structure with one subfolder for each configuration:

When you pack the nuspec file, you will receive the following message for each native library in the Debug and Release folders:

Issue: Assembly outside lib folder. Description: The assembly 'Content\Bin\Debug\??????.dll' is not inside the 'lib' folder and hence it won't be added as reference when the package is installed into a project. Solution: Move it into the 'lib' folder if it should be referenced.

We don't need such "solution" because this is just our goal: that native libraries aren't added as NET Assemblies references.

I can't solve your exact problem, but I can give you a suggestion.

Your key requirement is : "And have it not auto-register the reference".....

So you'll have to to become familiar with "solution items"

You'll have to write some powershell voodoo to get the copy of your native dll into its home (again, because you do NOT want the auto-add-reference voodoo to fire)

Here is a ps1 file I wrote.....to put files in a third party references folder.

There is enough there for you to figure out how to copy your native dll to some "home"...without having to start from scratch.

Again, its not a direct-hit, but its better than nothing.

the command nuget pack [projfile].csproj will do it for you automatically if you will mark the files as content.

Not the answer you're looking for? Browse other questions tagged nuget nuget-package nuget-spec or ask your own question.

166
How can I specify a [DllImport] path at runtime?
67
Set content files to "copy local : always" in a nuget package
15
How can I set the 'copy to output directory' property in my nuspec file?
20
Copy native dependencies locally in a Visual Studio project
17
How to add C++ library in a .NET Core project
6
Output Directory of native dll bundled with NuGet
10
Nuget package for just content files
2
Automaticaly copy native dll to the bin folder of referencing project in Visual Studio
3
NuGet package targets - how to copy files to subfolder of target dir on build?
4
How to create a nuget package supporting multiple platforms
See more linked questions

923
Download old version of package with NuGet
84
How can I make my managed NuGet package support C++/CLI projects?
178
Can't install nuget package because of "Failed to initialize the PowerShell host"
297
How do I enable NuGet Package Restore in Visual Studio?
4
How to use a native NuGet package from a managed project?
536
How can I clear the NuGet package cache using the command line?
326
NuGet Packages are missing
465
Assets file project.assets.json not found. Run a NuGet package restore