Is passing object to constructor pass by reference [duplicate]

Suppose I have a class and constructor called TestClass.

Here, the constructor accepts an object which is an instance of class Foo. Suppose my static void main(String[] args) does the following, completely separate from any TestClass;

After step (3), will the foo within my instance of TestClass also have its state changed?

It is not passed by reference. Rather, it is passed by value of the reference, which is a subtle but important distinction.

After you mutate foo in the rest of your main() method, the foo field will also exhibit these mutations, as you state, since both variables point to the same instance. However, if you reassign foo to something new, the foo field will not be changed. This would not be true if foo were truly passed by reference. In short, everything is passed by value in Java; it just so happens that objects are dealt with by reference, and so the values of these references are passed.

I'll try to illustrate this with an example. Consider the following class:

and the following method:

We can see that the state of a was changed in mutate(). Now let's modify the static method:

As you can see, the state of a is unchanged. If the reference had been passed to the function, we would expect the effect of the reassignment to be evident beyond the scope of the method. Nevertheless, some reference was in fact passed, since mutating the argument caused changes outside of the method as well. 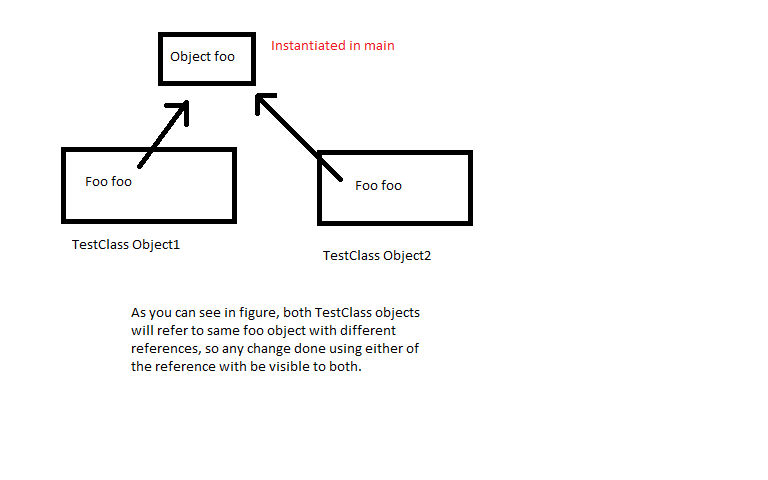 Yes, because you are assigning same object to another reference of Foo class, i.e. object is same, but being referred by two reference.

After step (3), will the foo within my instance of TestClass also have its state changed?

Now, assuming you pass the constructor a primitive value...

Which demonstrates the fact that changing the value of a primitive does not change the value maintained by the constructor/method.

Equally, if you change the object reference after you pass it

As the object references are not the same.

Not the answer you're looking for? Browse other questions tagged java constructor scope or ask your own question.