I have the following input tag in my html5 form:

This works just fine checking if the company name consists out of alphanumeric characters. But of course I want to allow spaces in the company name. I need to know what I should add to the pattern.

My solution is to cover all the range of diacritics:

A-z - this is for all latin characters

À-ž - this is for all diacritics

To ensure, for example, that a first AND last name are entered, use a slight variation like

It's quite an old question, but in case it could be useful for anyone, starting from a combination of good responses found here, I've ended using this pattern:

It will require at least two characters, making sure it does not start with an empty space but allowing spaces between words, and also allowing special characters such as ą, ó, ä, ö.

Use this code to ensure the user doesn't just enter spaces but a valid name: 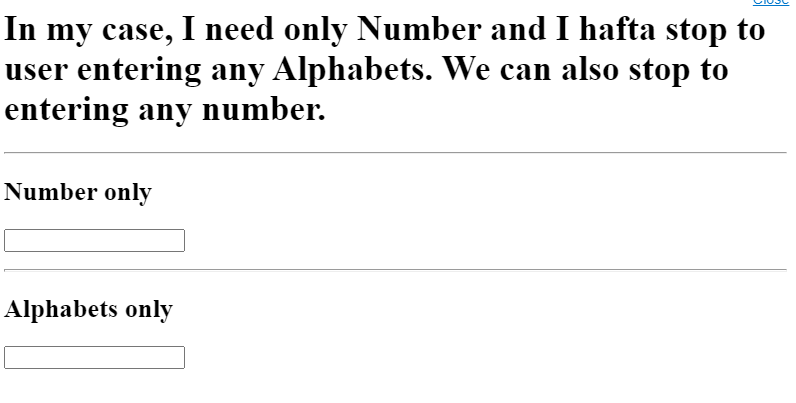 Use below code for HTML5 validation pattern alphanumeric without / with space :-

Not the answer you're looking for? Browse other questions tagged regex html validation forms alphanumeric or ask your own question.

4259
Change a HTML5 input's placeholder color with CSS
461
Disable validation of HTML5 form elements
415
HTML5 form required attribute. Set custom validation message?
118
Alphanumeric, dash and underscore but no spaces regular expression check JavaScript
211
Using the HTML5 "required" attribute for a group of checkboxes?
643
Is there a minlength validation attribute in HTML5?
145
Why does HTML5 form-validation allow emails without a dot?
873
An invalid form control with name='' is not focusable
3
How to validate Spaces, between alphanumeric inputs
1
HTML5 Form Validation Pattern