No compiler is provided in this environment. Perhaps you are running on a JRE rather than a JDK?

I'm compiling a project in Eclipse using m2eclipse. I set the JDK path in Eclipse like this:

But this is showing an error

Additionally, you may have to change Maven JRE (see @jlars62 answer) which is as follows. Goto Run -> Run Configurations, selecting the Maven Build I was running (from the left panel). Then, I clicked the JRE tab and selected the option Workspace default JRE 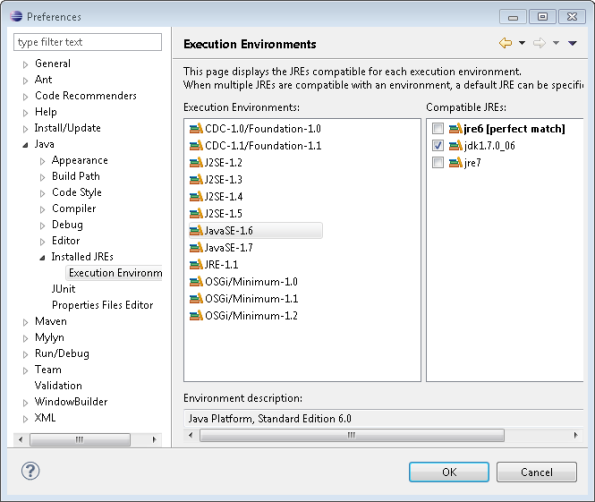 For me, it is exactly what the maven of eclipse complains 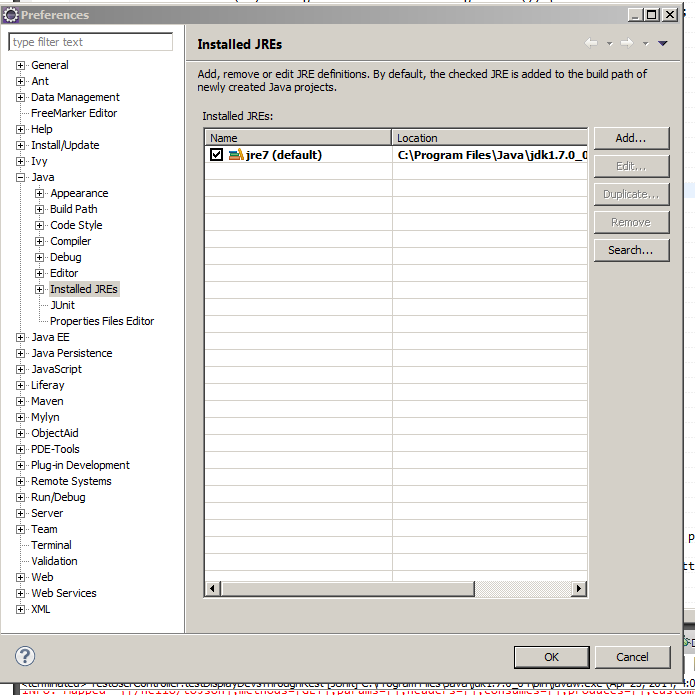 So, I press Edit button and change path to the JDK Folder, then clean project and everything starts to work

For me, nothing worked until I made this change to my pom.xml:

I could see that m2e was executing in a JRE, not the JDK. Nothing I did changed this, including adding this to the eclipse.ini:

In the end I never got m2e to execute in a JDK, but setting the Java compiler explicitly (as above) did the trick.

In my case it was solved by doing this:

Go to your 'Runtime Configuration' and configure your JRE to an JDK. 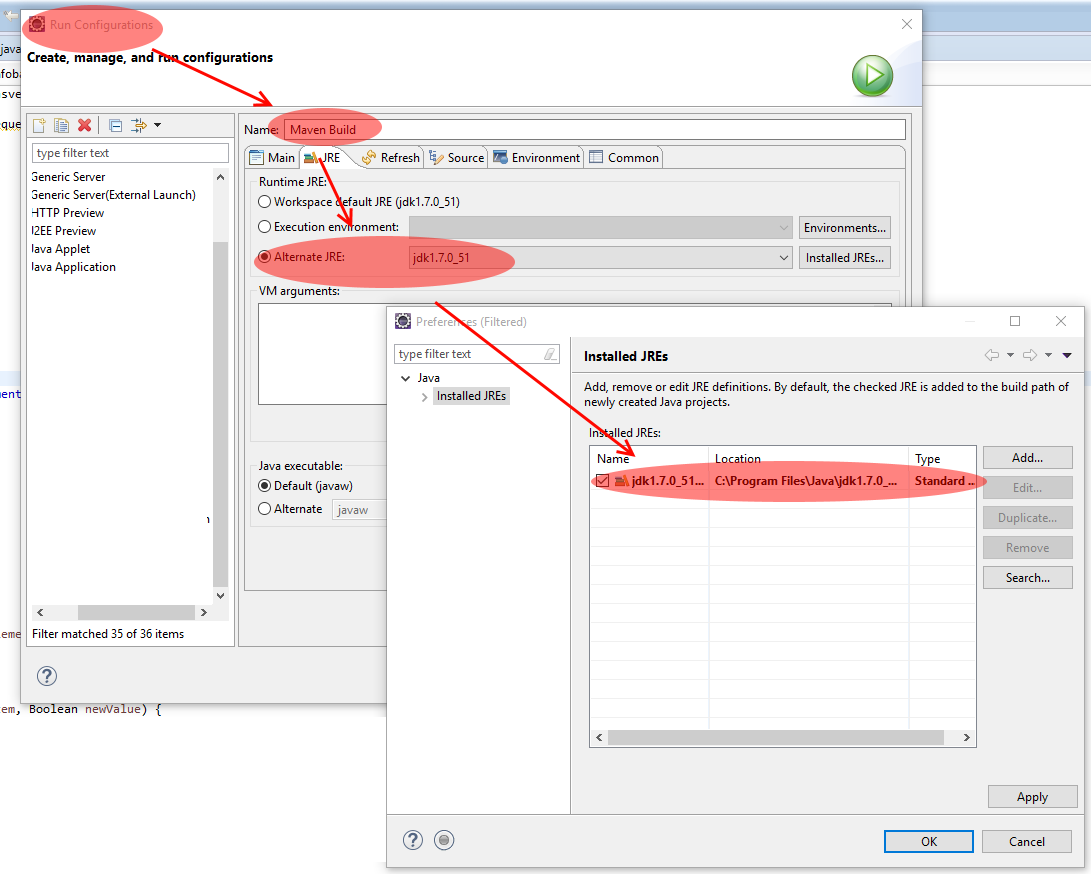 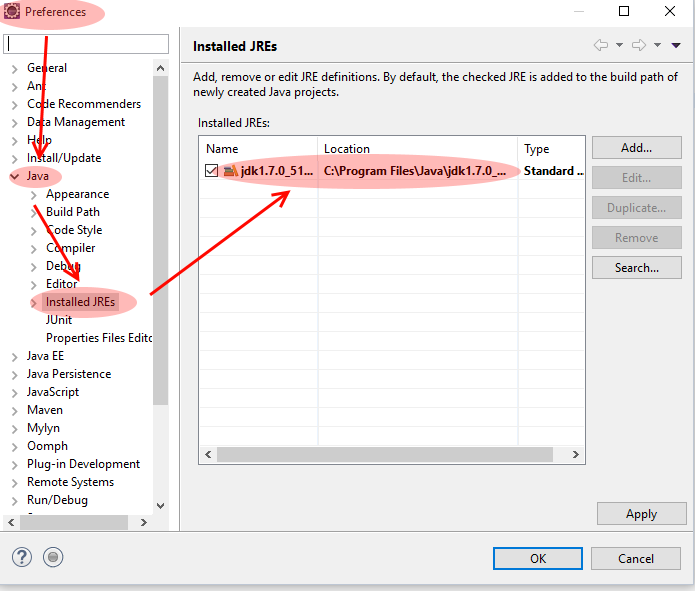 I copied answer just in case it is deleted for some reason, but the source is here

I was getting this error when trying to do a maven build from within eclipse.

For me, the answer was going to Run -> Run Configurations, selecting the Maven Build I was running (from the left panel). Then, I clicked the JRE tab and selected the option Workspace default JRE

may be jre is already added 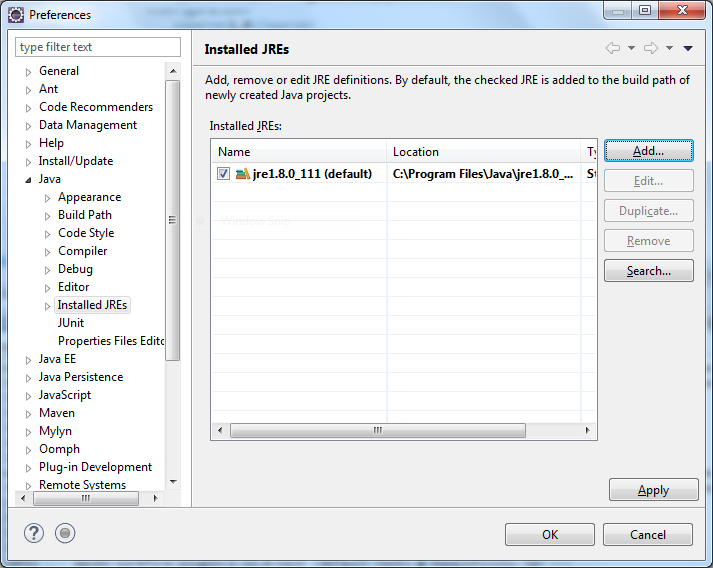 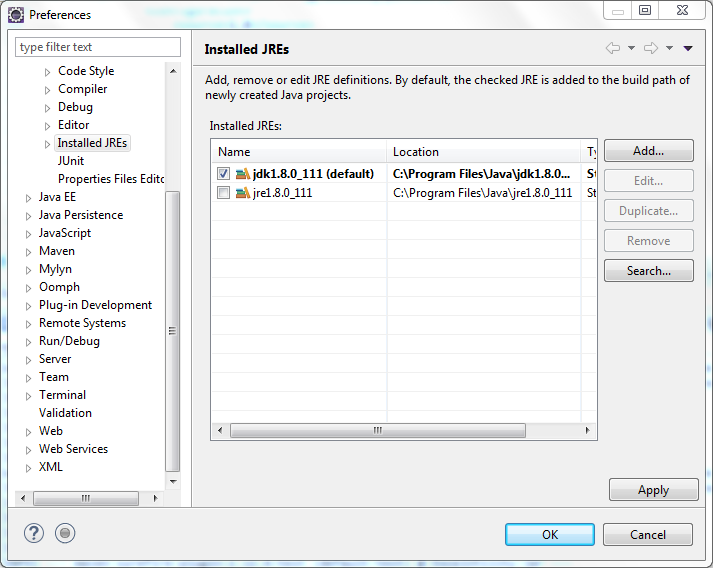 And You are done.

I got same issue and i just add JAVA_HOME to environment variables. 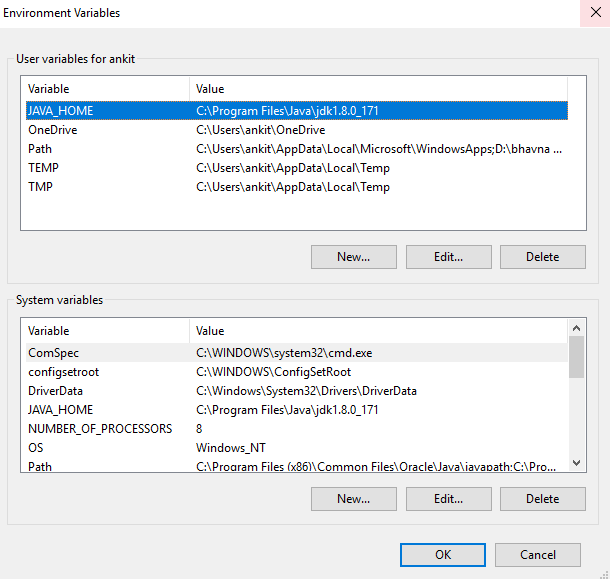 I tried all of the above, however, still getting the same error message.

In my case an actual JRE was incorrectly used as JRE System Library in the project-specific build path which was obviously overriding all those other settings discussed here.

If that is so in your case try the following:

An alternative if jaipster's answer does not work is to go to:
Window > Preferences > Java > Installed JREs

If you are running the Maven command from cmd, make sure you set the jdk path before running the command. In my case, I have created a .bat file containing the following:

I faced the same issue while trying to build a jar file of my project application using mvn clean install, though the application was working fine while running from Eclipse. 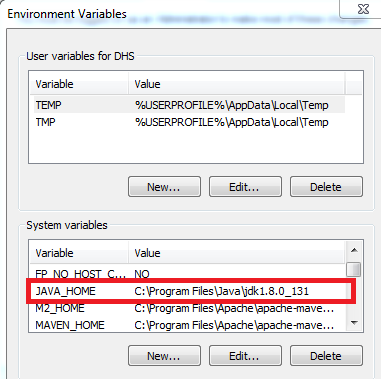 How I understood it is as:

The application worked fine in Eclipse as JRE System Library was referring to JRE inside the JDK folder instead of external JRE folder without JDK. [As explained very well in other answers]

This configuration does not apply to maven command that we run on command prompt. It will still look for JAVA_HOME variable to access the JRE System library and when it is not found it refers to external JRE folder without JDK.

My answer pertains to the Eclipse in Windows environment.

I went to Preferences --> Java --> Installed JREs I did NOT see the JDK in here. I only saw the JRE here. So I added the JDK and then unchecked the JRE. Then checked JDK. Then I ran the POM file using Run Configurations. Choose the tab JRE and select the option "Workspace Default..." Here are the images 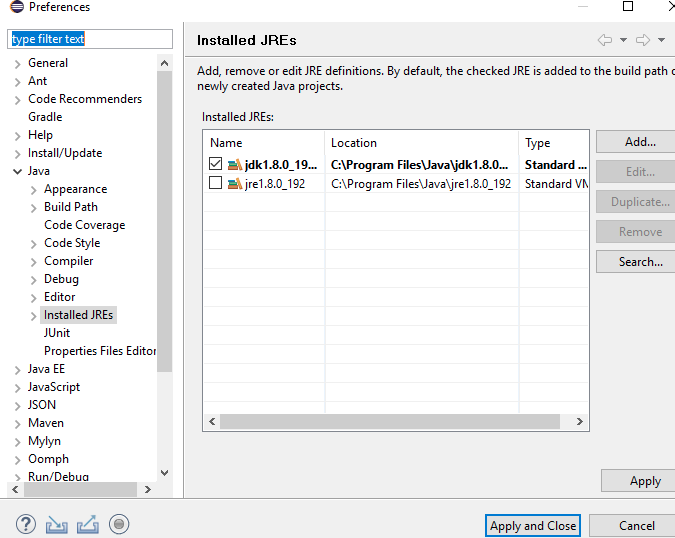 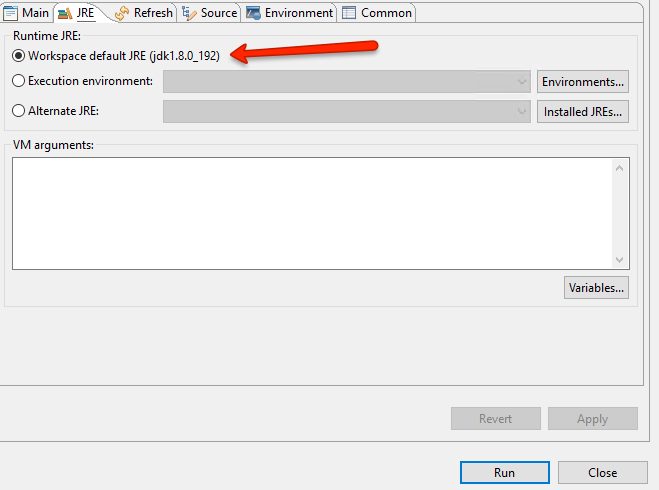 There are several options to specify.

Steps: Right on project in project explorer Go to Run-> Run Configuration -> Click Maven Build -> Click on your build config/or create a new config. You will see the window as the given snapshot below, click on JRE tab there. 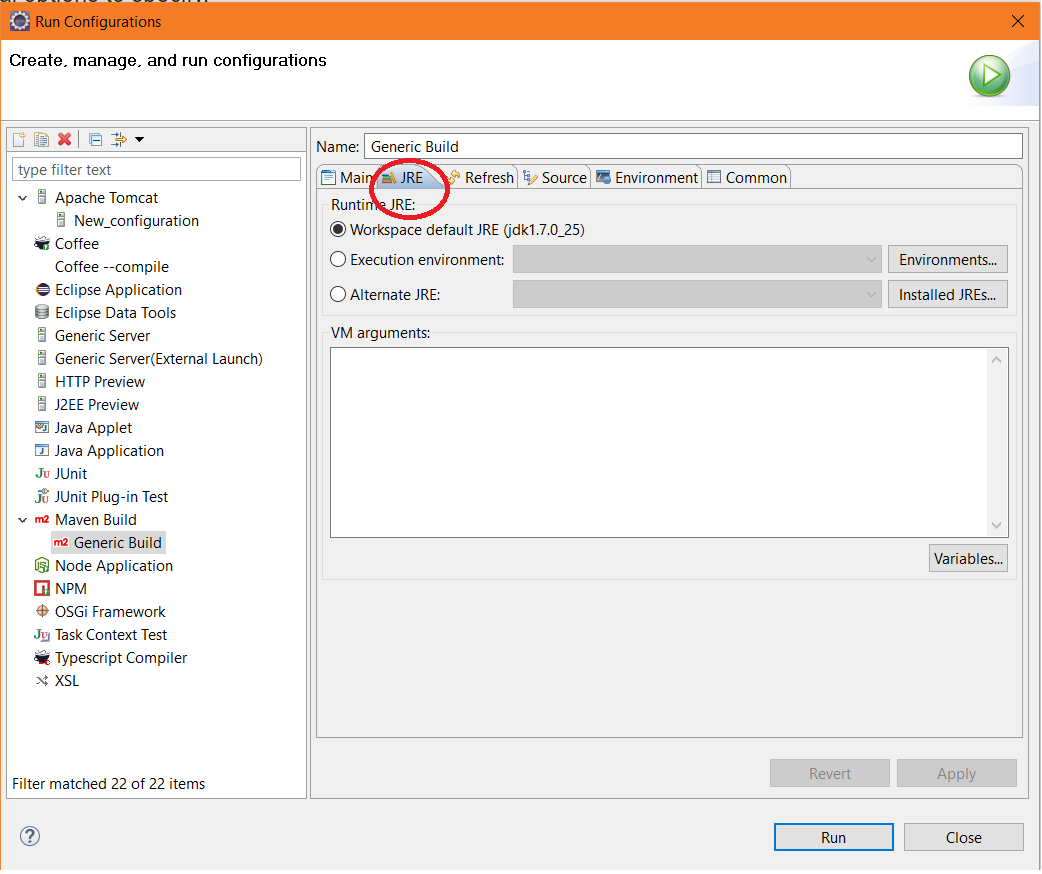 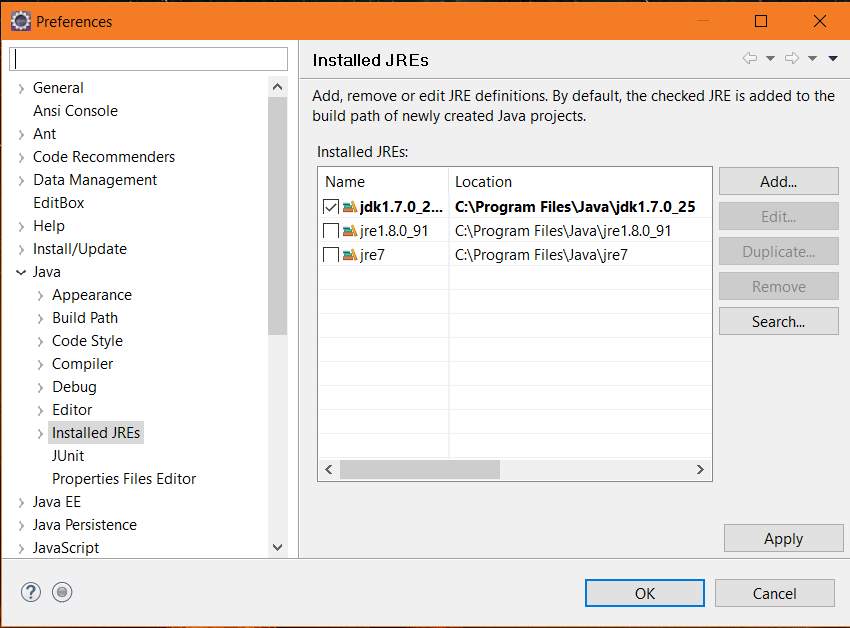 2) Execution Environment jdk can be set in pom.xml as mentioned by @ksnortum

Problem statement = No compiler is provided in this environment. Perhaps you are running on a JRE rather than a JDK? intellij

Please set the Environment variable like below to solve the issue

Moreover, Add Java and maven path in "System Variables" like below:

Though the question is about the error with Eclipse setup but thought an answer of fixing this error with IntelliJ and Windows 10 setup may also be helpful here.

2. Set JDK for Importer as shown below to JAVA_HOME

So I removed 1. Probably swapping them would fix it too.

There is another possible answer to this question, and I may be the only person foolish enough to have stumbled upon this, but I think it's worth adding, since none of the other answers applied as I already had those settings correct.

When you install a JDK, the installer asks you where you want to install the files. By default, on Windows, this is something like C:\Program Files\Java\jdk1.8.0_74 (or whatever version you are installing).

It then asks you for a directory to install the JRE to, which by default is something like C:\Program Files\Java\jre1.8.0_74.

I was rushing things, and thinking the installer was asking me the same question twice, set both my JDK and JRE install locations to D:\devtools\jdk\jdk1.8.0_74, resulting in the installer overwriting the JDK with the JRE. This resulted in (among other things) a missing javac.exe in my JDK bin, and the same error the OP reported here in all my maven builds.

I got a solution.

The most common solution for this problem is to change jdk location as my Installed JREs instead of the JRE location but that did not solve my problem this one time.

So I did the below to solve the problem. Expand the Installed JREs tab and you will find a Execution environments tab.

Click on your favourite execution environment. In my case it was JAVASE-1.8. There it shows 2 options. JDK and JRE. Select JDK there and the problem is solved. 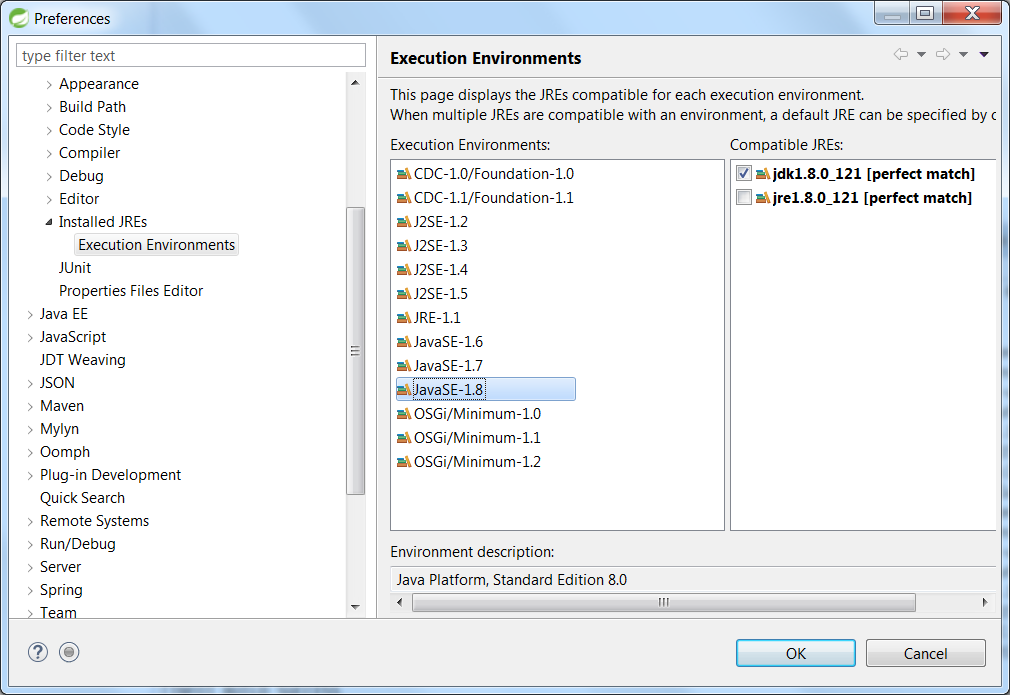 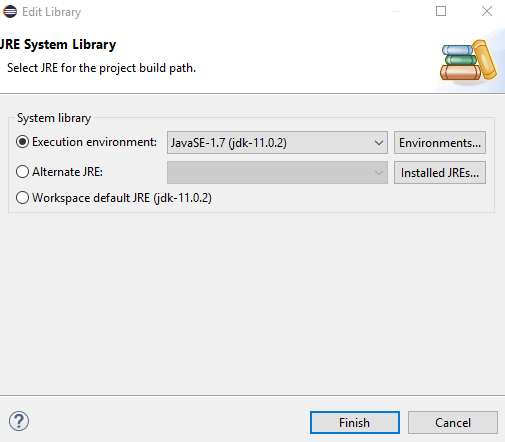 I just wasted 3 hours with this problem until I managed to make it work. I had this error in the Eclipse Terminal when issuing a mvn compile command:

No compiler is provided in this environment. Perhaps you are running on a JRE rather than a JDK?

So I read here that I have to make a new system variable called JAVA_HOME and make it point towards the jdk installation folder. However this generated another error:

Source option 1.5 is no longer supported. Use 1.6 or later

Couldn't find a fix for this one so...

So the fix to make it all go away is install Java SE Development Kit 8! I was using 9 thinking that if it's the latest it must be better...

Hoping this spares some poor wanderer of some trouble.

In my case I had system variable path has "C:\ProgramData\Oracle\Java\javapath" location.

In "C:\ProgramData\Oracle\Java\javapath" location java, javaw only there. So I am getting the same error.

Once I removed all files in "C:\ProgramData\Oracle\Java\javapath" folder my error got resolved.

i faced the same issue, the mistake i made was i added jre path only in the path var,not jdk path .When jdk path was added to path and build the maven project its working perfect .Thanks all

I did the following change and it worked for me.Hope it helps someone. 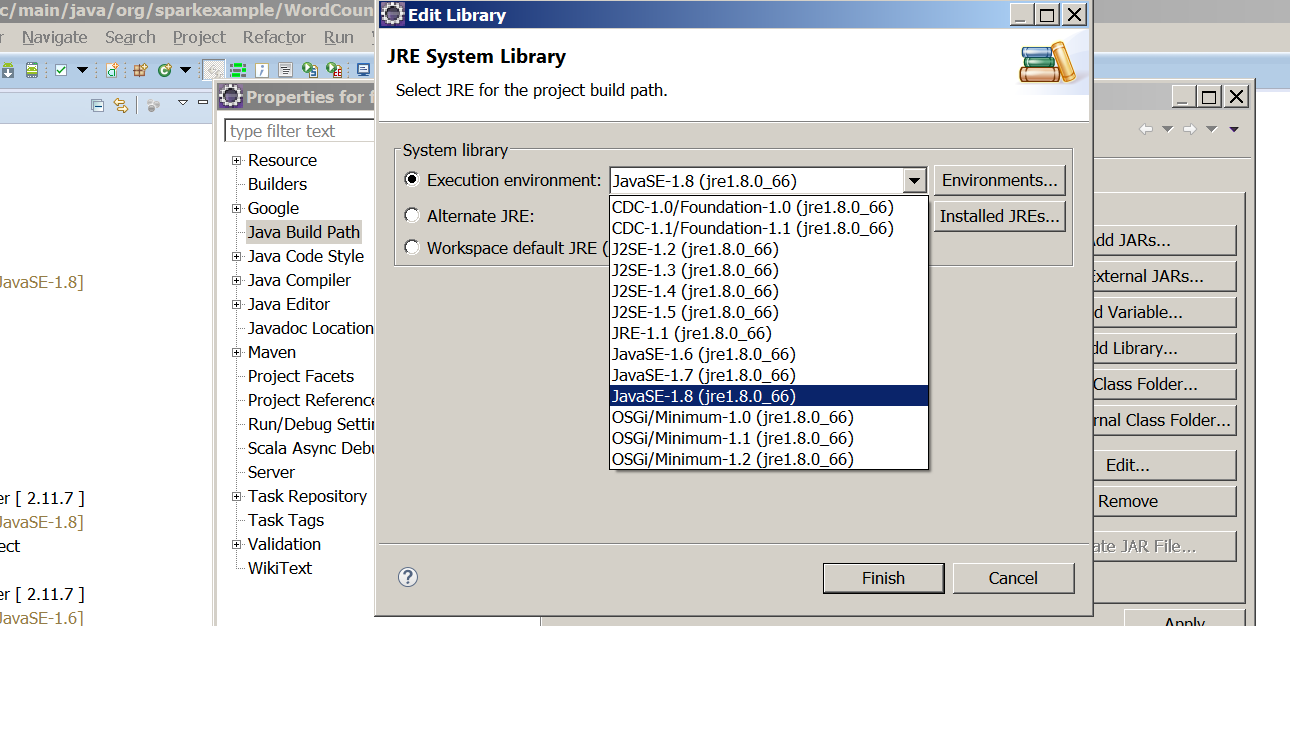 I was getting the same error when I created a new EC2 ubuntu 16.04 instance with Java already installed on it and while running mvn clean package, I encountered this issue and the below solution worked for me.

If you are working on an Ubuntu server, then you can try installing Java again and for that you can use this answer How to install the JDK on Ubuntu Linux

In Windows 7 - 64 bit, there is a permissions problem which prevents the installer from unpacking the file C:\Program Files\Java\jdk1.6.xx\lib\tools.jar into your local. This jar file is what maven-compiler-plugin version 3.x uses instead of the usual javac

Solution: Run, as an administrator, the Java JDK installer! And make sure the tools.jar is sitting in the C:\Program Files\Java\jdk1.6.xx\lib\

In case you are using m2e maven integration plugin, you want to see the file is visible to Eclipse via the following steps inside Eclipse:

Go to Window -> Preferences -> Java -> installed JREs Select the JDK you are using (C:\Program Files\Java\jdk1.6.xx) Press Edit to see the list of jars including tools.jar, OR you can add it as Add External JAR Then configure the maven run through these steps:

Run->Run configurations->Fill in Name, Base directory and Goals. Then in the same window move to the JRE tab and point to the JDK \jdk1.6.xx\

In addition to answer above, I could say that just try to run Maven from the terminal (outside of Eclipse). In this way, if it builds from outside but not in Eclipse, you can understand that the problem should be in Eclipse.

There are several answers regarding this question but all are related to right path configuration of JDK, but with JRE only we can solve this problem.

We just need to make use of deployment assembly to configure the path of packaged war file of the Java EE Project and then re-run the maven-install.

Steps to make use of deployment assembly:

This will build your project successfully, without any compiler error.

Hope this solves the problem without JDK.

Not the answer you're looking for? Browse other questions tagged java eclipse maven java-7 m2eclipse or ask your own question.