Running git on a Windows XP machine, using bash. I exported my project from SVN, and then cloned a bare repository.

I then pasted the export into the bare repositories directory, and did a:

LF will be replaced by CRLF

What are the ramifications of this conversion? This is a .NET solution in Visual Studio.

These messages are due to incorrect default value of core.autocrlf on Windows.

The concept of autocrlf is to handle line endings conversions transparently. And it does!

Bad news: value needs to be configured manually.
Good news: it should only be done ONE time per git installation (per project setting is also possible).

When does this warning show up (under Windows)

What does this warning mean

Yet another way to show how autocrlf works

Default value for core.autocrlf is selected during git installation and stored in system-wide gitconfig (%ProgramFiles(x86)%\git\etc\gitconfig on windows, /etc/gitconfig on linux). Also there're (cascading in the following order):

So, write git config core.autocrlf in the working dir to check the currently used value and

PS What to choose when installing git for Windows?
If you're not going to use any of your projects under Unix, don't agree with the default first option. Choose the third one (Checkout as-is, commit as-is). You won't see this message. Ever.

PPS My personal preference is configuring the editor/IDE to use Unix-style endings, and setting core.autocrlf to false.

Git has three modes of how it treats line endings:

You can set the mode to use by adding an additional parameter of true or false to the above command line.

If core.autocrlf is set to true, that means that any time you add a file to the git repo that git thinks is a text file, it will turn all CRLF line endings to just LF before it stores it in the commit. Whenever you git checkout something, all text files automatically will have their LF line endings converted to CRLF endings. This allows development of a project across platforms that use different line-ending styles without commits being very noisy because each editor changes the line ending style as the line ending style is always consistently LF.

The side-effect of this convenient conversion, and this is what the warning you're seeing is about, is that if a text file you authored originally had LF endings instead of CRLF, it will be stored with LF as usual, but when checked out later it will have CRLF endings. For normal text files this is usually just fine. The warning is a "for your information" in this case, but in case git incorrectly assesses a binary file to be a text file, it is an important warning because git would then be corrupting your binary file.

If core.autocrlf is set to false, no line-ending conversion is ever performed, so text files are checked in as-is. This usually works ok, as long as all your developers are either on Linux or all on Windows. But in my experience I still tend to get text files with mixed line endings that end up causing problems.

My personal preference is to leave the setting turned ON, as a Windows developer.

See https://mirrors.edge.kernel.org/pub/software/scm/git/docs/git-config.html for updated info that includes the "input" value.

If you already have checked out the code, the files are already indexed. After changing your git settings, say by running:

you should refresh the indexes with

and re-write git index with

Note: this will remove your local changes, consider stashing them before you do this.

Both unix2dos and dos2unix is available in windows with gitbash. You can use the following command to perform UNIX(LF) -> DOS(CRLF) conversion. Hence, you will not get the warning.

But, don't run this command on any existing CRLF file, then you will get empty newlines every second line.

dos2unix -D filename will not work with every operating system. Please check this link for compatibility.

If for some reason you need to force the command then use --force. If it says invalid then use -f.

A GitHub article on line endings is commonly mentioned when talking about this topic.

I'm using Windows with Cygwin, dealing with both Windows and UNIX projects at different times. Even my Windows projects sometimes use bash shell scripts, which require UNIX (LF) line endings.

Using GitHub's recommended core.autocrlf setting for Windows, if I check out a UNIX project (which does work perfectly on Cygwin - or maybe I'm contributing to a project that I use on my Linux server), the text files are checked out with Windows (CRLF) line endings, creating problems.

Basically, for a mixed environment like I have, setting the global core.autocrlf to any of the options will not work well in some cases. This option might be set on a local (repository) git config, but even that wouldn't be good enough for a project that contains both Windows- and UNIX-related stuff (e.g. I have a Windows project with some bash utility scripts).

The best choice I've found is to create per-repository .gitattributes files. The GitHub article mentions it.

Example from that article:

In one of my project's repository:

It's a bit more things to set up, but do it once per project, and any contributor on any OS should have no troubles with line endings when working with this project.

I think @Basiloungas's answer is close but out of date (at least on Mac).

Open the ~/.gitconfig file and set safecrlf to false

That *will make it ignore the end of line char apparently (worked for me, anyway).

In vim open the file (e.g.: :e YOURFILEENTER), then

I had this problem too.

SVN doesn't do any line ending conversion, so files are committed with CRLF line endings intact. If you then use git-svn to put the project into git then the CRLF endings persist across into the git repository, which is not the state git expects to find itself in - the default being to only have unix/linux (LF) line endings checked in.

When you then check out the files on windows, the autocrlf conversion leaves the files intact (as they already have the correct endings for the current platform), however the process that decides whether there is a difference with the checked in files performs the reverse conversion before comparing, resulting in comparing what it thinks is an LF in the checked out file with an unexpected CRLF in the repository.

As far as I can see your choices are:

Footnote: if you choose option #2 then my experience is that some of the ancillary tools (rebase, patch etc) do not cope with CRLF files and you will end up sooner or later with files with a mix of CRLF and LF (inconsistent line endings). I know of no way of getting the best of both.

Removing the below from the ~/.gitattributes file

will prevent git from checking line-endings in the first-place.

Most of tools in Windows accepts also a simple LF in text files. For example you can control the behaviour for Visual Studio in a file named '.editorconfig' with following example content (part):

Only the original Windows-Notepad does not work with LF but there are some more proper simple editor tools available!

Hence You should use LF in text files in Windows too. This is my message, stronlgy recommended! There is no reason to use CRLF in windows!

(The same discussion is using \ in include paths in C/++, it is bullshit, use #include <pathTo/myheader.h> with slash!, It is the C/++ standard and all microsoft compilers support it).

Hence the proper setting for git is

My message: Forget such old thinking programs as dos2unix and unix2dos. Clarify in your team that LF is proper to use under Windows.

You can disable the CRLF behaviour completely, or per filetype by changing entries in your .gitattributes file. In my case, i put this:

This one really works. Git will respect the line endings in mixed line ending projects and not warn you about them.

I don't know much about git on Windows, but...

Chances are, the return format will be adjusted properly when the code is moved to another system. I also reckon git is smart enough to keep binary files intact rather than trying to convert LFs to CRLFs in, say, JPEGs.

In summary, you probably don't need to fret too much over this conversion. However, if you go to archive your project as a tarball, fellow coders would probably appreciate having LF line terminators rather than CRLF. Depending on how much you care (and depending on you not using Notepad), you might want to set git to use LF returns if you can :)

warning: (If you check it out/or clone to another folder with your current core.autocrlf being true,)LF will be replaced by CRLF

The file will have its original line endings in your (current) working directory.

This picture should explain what it means. 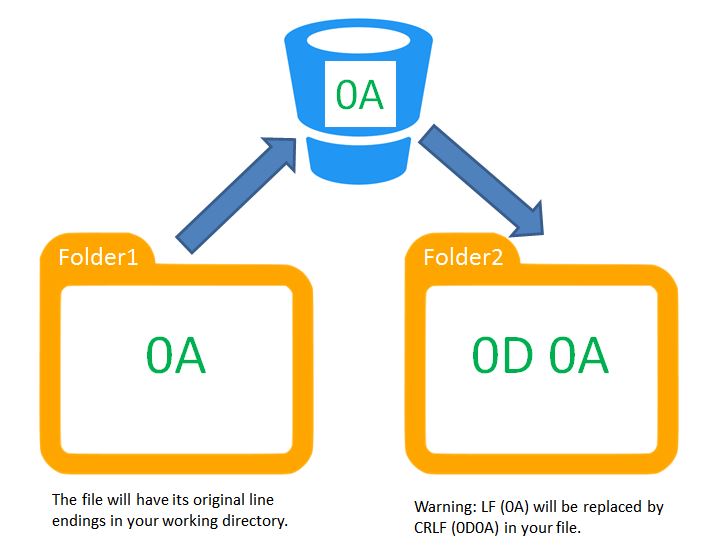 OP's question is windows related and I could not use others without going to the directory or even running file in Notepad++ as administrator did not work.. So had to go this route:

CRLF could cause some problem while using your "code" in two different OS (Linux and Windows). My python script was written in Linux docker container and then pushed using Windows git-bash. It gave me the warning that LF will be replaced by CRLF. I didn't give it much thought but then when I started the script later, it said /usr/bin/env: 'python\r': No such file or directory. Now that an \r for ramification for you. Windows uses "CR" - carriage return - on top of '\n' as new line character - \n\r. That's something you might have to consider.

Many text-editors allow you to change to LF, see Atom instructions below. Simple and explicit.

Select LF in dropdown on top:

In a GNU/Linux shell prompt, dos2unix & unix2dos commands allow you to easely convert/format your files coming from MS Windows

Other answers are fantastic for the general concept. I ran into a problem where after updating the warning still happened on existing repos which had commits in previous setting.

" Apply the "clean" process freshly to all tracked files to forcibly add them again to the index. This is useful after changing core.autocrlf configuration or the text attribute in order to correct files added with wrong CRLF/LF line endings. This option implies -u."

I just had the same error. It happend after installing NVM on windows 10.

Setting the autoclrf in all levels did not worked.
I used In CMD: “git ls-files --eol”

Conclusion: Files I made have the different ending.

To change the files and reset

Altho: In some projects I needed to delete the repository and start it fresh.

Not the answer you're looking for? Browse other questions tagged linux windows git newline lf or ask your own question.

1678
LF will be replaced by CRLF in git - What is that and is it important?
0
"LF would be replaced by CRLF in crush/admin.py" error when staging with git
0
about LF and CRLF in git using Windows
0
Handling CRLF on a per project basis in Windows 10 / WSL with git?
1
Stuck on git add
0
When I use git add . command it keeps showing me warnings
650
What's the significance of the "No newline at end of file" log?
655
What's the strategy for handling CRLF (carriage return, line feed) with Git?
245
'git status' shows changed files, but 'git diff' doesn't
393
Why should I use core.autocrlf=true in Git?
See more linked questions