External VS2013 build error "error MSB4019: The imported project <path> was not found"

Here are the two lines in question:

$(VSToolsPath) elongates from what I see to the v11.0 (VS2012) folder, which obviously is not there anymore. The path should have been to v12.0.

I tried specifying VSToolsPath in my system environment variables table, but the external build utility still uses v11.0. I tried searching through the registry and that came up with nothing.

Sadly, I do not see any easy way to get the exact command line used. I use a build tool.

I had the same issue and find an easier solution

It is due to Vs2012 adding the following to the csproj file:

You can safely remove that part and your solution will build.

As Sielu pointed out you have to ensure that the .proj file begin with <Project ToolsVersion="12" otherwise the next time you open the project with visual studio 2010, it will add the removed node again.

Otherwise, if you need to use webdeploy or you use a build server, the above solution will not work but you can specify the VisualStudioVersion property in your build script:

or edit your build definition: 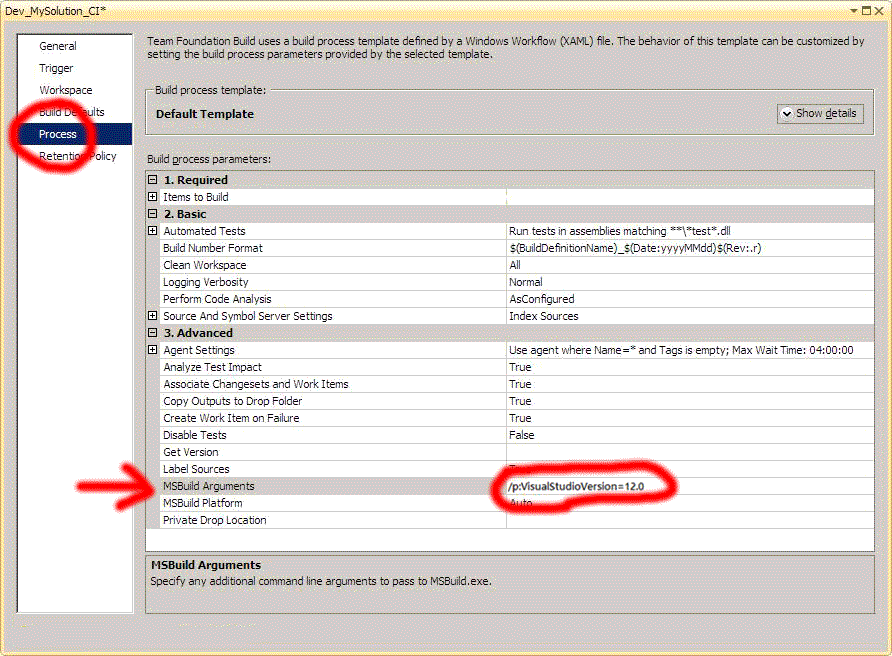 I had this too and you can fix it by setting the tools version in your build definition.

This is very easy to do. Open your build definition and go to the "Process" page. Then under the "3. Advanced" group you have a property called "MSBuild Arguments". Place the parameter there with the following syntax

If you have more parameters, separate them with a space and not a comma.

This is closely related but may or may not fix OPs specific issue. In my case I was trying to automate the deployment of an Azure site using VS2013. Building and deploying via VS works, however, using MSBuild showed a similar error around the "targets". Turns out MSBuild is different under VS2013, and is now part of VS and not the .Net Framework (see http://timrayburn.net/blog/visual-studio-2013-and-msbuild/). Basically, use the correct version of MSBuild:

Newer still, VS2017 (not fully testing but discovered - they've moved things around a bit)

I just received a response from Kinook, who gave me a link:

Basically, I need to call the following prior to bulding. I guess Visual Studio 2013 does not automatically register the environment first, but 2012 did, or I did and forgot.

giammin's solution is partially incorrect. You SHOULD NOT remove that entire PropertyGroup from your solution. If you do, MSBuild's "DeployTarget=Package" feature will stop working. This feature relies on the "VSToolsPath" being set.

I had this problem for our FSharp targets (FSharpTargetsPath was empty).

Many of the paths are built with reference to the VS version.

For various reasons, our build runs with system privileges, and the environment variable "VisualStudioVersion" was only set (by the VS 2013 installer) at the "user" level - which is fair enough.

Ensure that the "VisualStudioVersion" environment variable is set to "12.0" at the level (System or User) that you are running at.

Running this in the commandline will fix the problem also. SETX VisualStudioVersion "12.0"

If you migrate Visual Studio 2012 to 2013, then open *.csprorj project file with edior.
and check 'Project' tag's ToolsVersion element.

Or If you build with msbuild then just specify VisualStudioVersion property

I was using an external build utility. Think of something like Ants, if I understand the product correctly, just a commercial version. I had to contact the manufacturer for the answer.

As it turns out, there is a global macro in the project, DEVSTUDIO_NET_DIR. I had to change the path to .Net there. They list various visual studio versions as "Actions", which through me off, but all roads lead back to that one global variable behind the scenes. I would list that as a defect against the product, if I had my way, unless I am missing something in my understanding. Correcting the path there fixed the build problem.

I have Visual Studio 2013 installed. This worked for me:

I had similar issue. All proposed solutions are just work around for this issue but are not solving source of error. @giammin solution should not be applied if you are using tfs build server as it is just crashed publish functionality. @cat5dev solution - solves issue but do not solve source of it.

This works without any changes in project file.

I also had the same error .. I did this to fix it

In my case i just comment below line by opening .csproj file and did the trick

My problem may be different but i am dragged here, but this may help someone.

I picked a single web project from my solution and try to open it as a stand alone project which was making issue, after above heck am able to solve issue.

Use the correct version of MSBuild. Set Environment Variable to:

This will also work for VS 2019 projects

Previously we were setting it to C:\Windows\Microsoft.NET\Framework\v4.0.30319

In my case dev environment is VS2013 and I am using TFS 2010. Build was targeted for .NET 4.5.1. I was setting up auto build for CI. whenever I tried workarounds mentioned above - like removing properties group completely or replacing some lines etc.my build used to happen in TFS but my publish to azure used to fail with 'MSDeploy' or at times some different error. I was not able to achieve both simultaneously.

So finally I had to pass MSBuild argument to resolve the issue.

in csproj file for which this error is appearing. Just remove this from csproj and then build.

Only one thing needs to be done to solve the problem: upgrade TeamCity to version 8.1.x or higher because support for Visual Studio 2012/2013 and MSBuild Tools 2013 was only introduced in TeamCity 8.1. Once you've upgraded your TeamCity modify MSBuild Tools Version setting in your build step accordingly ans the problem will disappear. For more info read here: http://blog.turlov.com/2014/07/upgrade-teamcity-to-enable-support-for.html

Me - nothing was helping in changing the v11.0 value of VisualStudioVersion variable to v10.0. Changing variable in .csproj file didn't. Setting it through command promt didn't. Etc...

Ended up copying my local folder of that specific version (v11.0) to my build server.

I had tried all of the above solutions and still no luck. I had heard people installing visual studio on their build servers to fix it, but I only had 5gb of free spaces so I just copied C:\Program Files (x86)\MSBuild\Microsoft\VisualStudio to my build server and called it a day. Started working after that, using team city 9.x and visual studio 2013.

Based on TFS 2015 Build Server

If you counter this error ... Error MSB4019: The imported project "C:\Program Files (x86)\MSBuild\Microsoft\VisualStudio\v14.0\WebApplications\Microsoft.WebApplication.targets" was not found. Confirm that the path in the <Import> declaration is correct, and that the file exists on disk.

Open the .csproj file of the project named in the error message and comment out the section below

I got this error when I install some VS components. Unfortunately none of these answers didn't help me. I use TFS for command development and I have no permissions to edit build definition. I solved this problem by deleting environment variables which called VS110COMNTOOLS and VS120COMNTOOLS. I think it was installed with my VS components.

I found I was missing the WebApplications folder on my local PC, did not install with Visual Studio 2017 like it had when I was using 2012.

In my case I was using the wrong version of MSBuild.exe.

The version you need to use depends on what version of Visual Studio you used to create your project. In my case I needed 14.0 (having used Visual Studio 2015).

This was found at:

You can look under:

To find other versions.

Not the answer you're looking for? Browse other questions tagged c# web-applications visual-studio-2013 build visual-build-professional or ask your own question.

446
Microsoft.WebApplication.targets was not found, on the build server. What's your solution?
84
v11.0\WebApplications\Microsoft.WebApplication.targets was not found when file actually references v10
47
MSBuild deploy failing after upgrade to .NET 4.5
64
How to build .NET 4.6 Framework app without Visual Studio installed?
21
Build VS2013 on a TFS Build Server With Only VS2013
12
error MSB4102: The value "" of the "Project" attribute in element <Import> is invalid. Parameter "path" cannot have zero length. F#
8
How to add Visual Studio 2017 to Team Foundation Server Build Agent?
4
SonarQube.Runner not compatible with C# plugin
4
External VS2013 build error “error MSB4019: The imported project <path> was not found”
3
MSBuild error when building the solution from VSTS build
See more linked questions