I'm working on a plate tectonics simulator that uses a repurposed flood fill algorithm in order to detect continents. The algorithm is much the same. The only difference is that it works with vertices instead of pixels.

I've been trying to improve the quality of this behavior - I'd like to see how it performs when it ignores pixels/vertices with two neighbors or fewer with continental crust. Is there any existing variant of the flood fill algorithm that supports this?

My (somewhat simplified) code is as follows:

Theoretically speaking, skipping elements in an algorithm conducted over a set should decrease the time spent by that algorithm. Whether or not that increase in speed is significant depends upon your data set and the amount of time spent checking each element. If there are many cases where the skip condition will apply, then it would seem reasonable to say that the algorithm's efficiency will improve.

If (C < E * e) then the algorithm is more efficient for that particular data set than if it had no skip condition. The following graph demonstrates a scenario where checking an element costs 10% of processing an element. As more elements are skipped, the cost of the function naturally decreases. 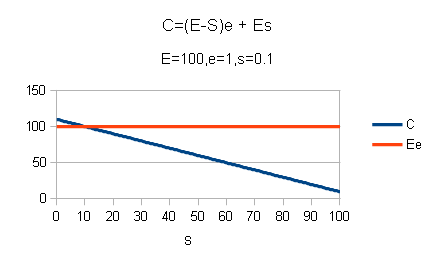 Considering your case with a floodfill algorithm, it could be difficult to know ahead of time whether or not skipping certain elements will help, due to the graph nature of the problem and the variable initial co-ordinate. On one hand, an entire chain of elements adjacent to one vertex may be eliminated from the process by skipping that vertex, and on the other hand, the cost of checking could outweigh the advantages. Some testing will be in order for your particular data set.

If your simplified code reflects the actual code accurately, then there are a couple issues which I'd like to point out.

I have set up a jsperf demo demonstrating some of the changes that could be made to your algorithm, regarding basic efficiency such as using an associative map, not using Array.concat, ignoring neighbors of a vertex that happen to be the vertex itself, and, of course, skipping elements. As always with any optimization issue, you should profile first to find where your program is spending most of its time and benchmark changes in code appropriately. I hope this has been of some help to you, and good luck!

A copy of the most important code used in the demo follows:

Wasn't too hard, in the end. I all need to do was move the isContinental check to the neighboring vertices. I cannot say whether this is the most efficient method, but it does work:

Not the answer you're looking for? Browse other questions tagged javascript performance algorithm flood-fill or ask your own question.