Until now I believed that 1024 bytes equals 1 KB (kilobyte) but I was reading on the internet about decimal and binary system. 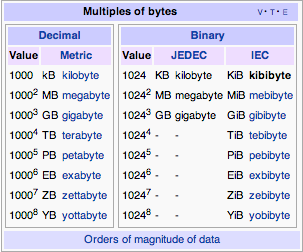 So, actually 1024 bytes = 1 KB would be the correct way to define or simply there is a general confusion?

What you are seeing is a marketing stunt. Since non-technical people don't know the difference between Metric Meg, Gig, etc. against the binary Meg, Gig, etc. marketers for storage will use the Metric calculation, thus 1000 Bytes == 1 KiloByte.

This can cause issues with development or highly technical people so you get the idea of a binary Meg, Gig, etc. which is designated with a bi instead of the standard combination (ex. Mebibyte vs Megabyte, or Gibibyte vs Gigabyte)

In the normal world, most things go by the power of 10. This would include electricity, for example.

But, in the computer world, it is about half binary. For example, when they sell a hard drive, they sell it by the value of 10, so if it is a 1KB drive, then it is 1000 B. But, when the computer reads it, the OS's usually read by the value of 1024. This is why, when you read the size of space available on a drive, it reads much less then what it was advertised. A 500 GB drive will read only about 466GB, because the computer is reading the drive by the binary 1024 version. Not the power of 10 that it was sold and advertised by. Same will go with flash drives. But, RAM is sold, and read by the computer, by the Binary 1024 version.

One thing to note.. It is "B", not "b". There are 8 bits "b" in a Byte "B". The reason I bring this up is when you get internet service, they usually advertise the speed by bits, not bytes. When it reads in the download box on the computer, it reads the speed in bytes. Say you have a 50Mb internet connection, it is actually 6.25MB connection in the download speed box, because you have to divide the 50 by 8 since there are 8 bits in a byte. That is how the computer reads it. Another marking strategy too. After all, 50Mb sounds much faster then 6.25MB. Other then speeds through a network, most things are read by bytes "B". Some people do not realize that there is a difference between the "B" and "b".

Any non-computing reference to Kilo/Mega etc. Is based on the decimal 1000 base, eg. 1KW or 1KiloWatt which is 1000 Watts.

Not the answer you're looking for? Browse other questions tagged binary byte system decimal bit or ask your own question.

-4
How to create byte array and fill it with random data
0
1MiB = 1024KiB = 2^10. Nonetheless, why not use just 1000 byte instead 1024 to calculate size?
-1
Does Microsoft psapi methods return bytes using decimal or binary notation?