When upgrading my project to the latest version of Google Play Services (v4.0, released on Halloween 2013), you are now supposed to add a new tag into the AndroidManifest.xml file.

Unfortunately, when I try doing that, I then get this compile error:

I can then navigate to the file at google-play-services_lib/res/values/version.xml and view the raw integer for that symbol:

And then insert it back into my AndroidManifest.xml:

Doing this works absolutely fine and I can then compile and run the project and app just fine. But it's definitely an undesirable fix with obvious upgradability issues.

For everyone using Eclipse, this is how you should do it.

Then, on your project

Please note that this fix may only apply to IntelliJ users!! (More information at the bottom of this post that should apply to everyone.)

Fixed this problem! I use IntelliJ and it turns out I just had misconfigured the way I was including the google-play-services_lib module as a dependency.

As I fixed this entirely through GUI and not at all by editing any files, here's a couple of screenshots: 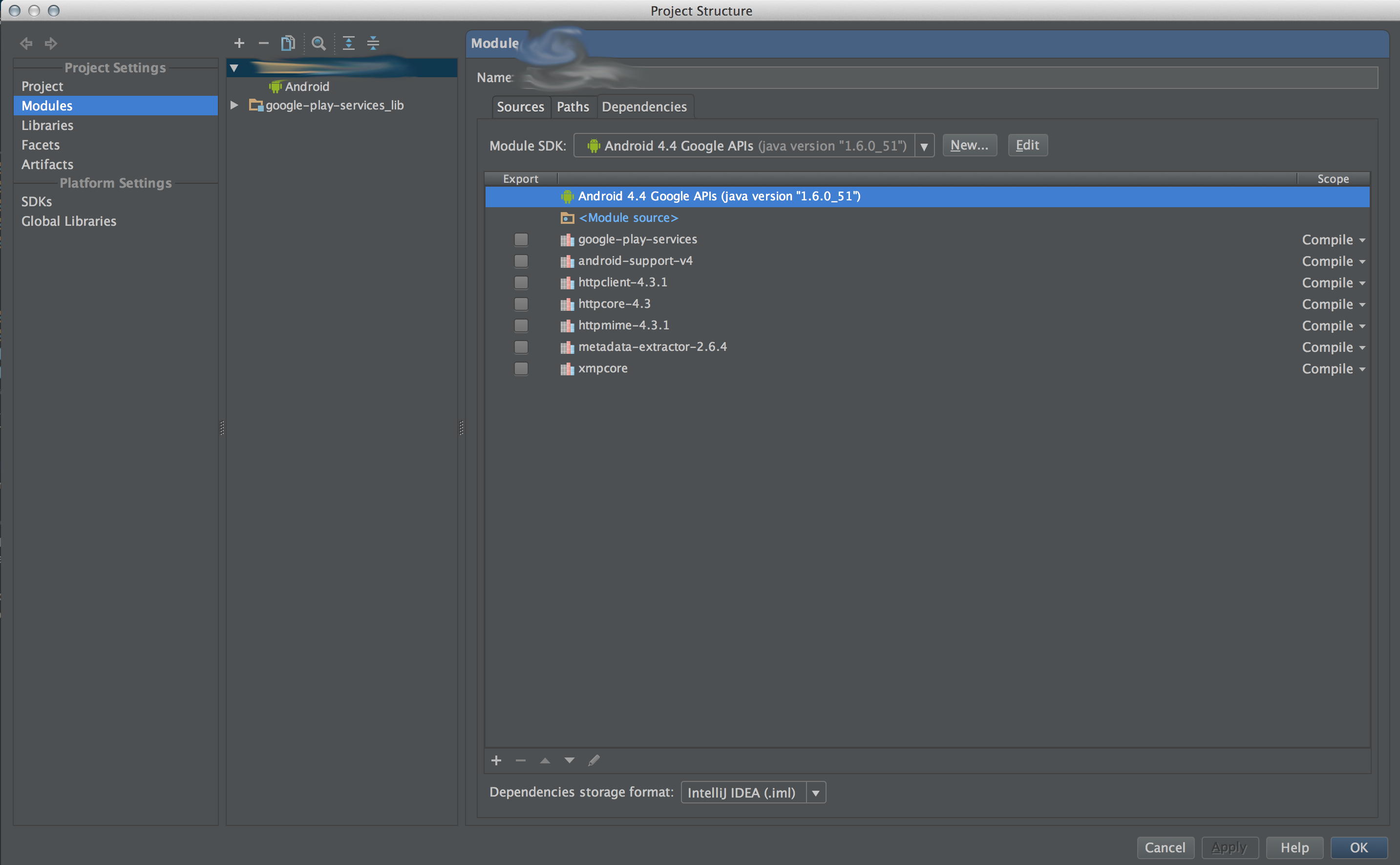 So my Project Structure started off looking like this... 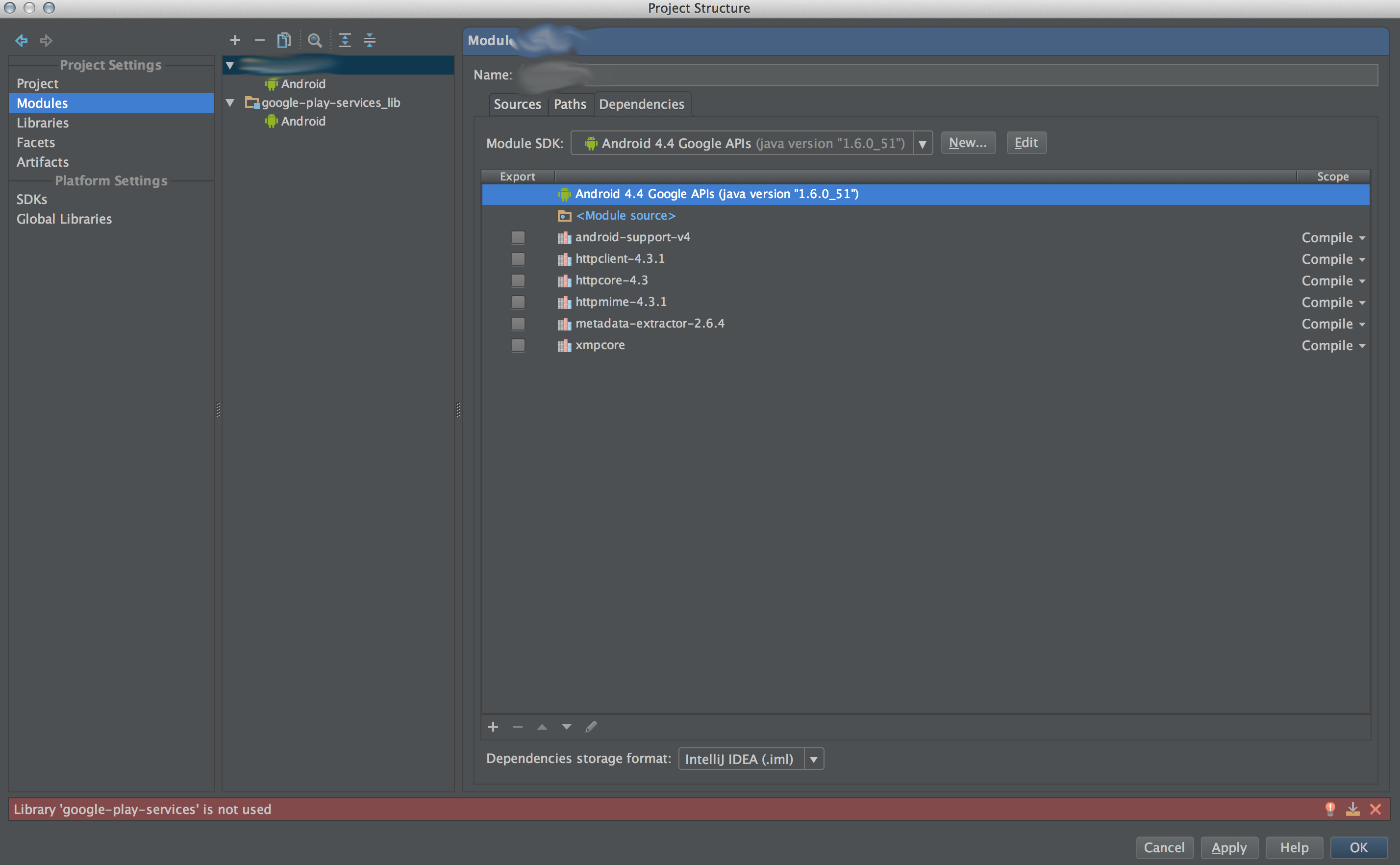 Then I removed the google-play-services library from my dependencies list by selecting it and then clicking the minus button at the bottom. Notice the error at the bottom of the dialog, as my project absolutely does require this library. But don't worry, we'll re-add it soon! 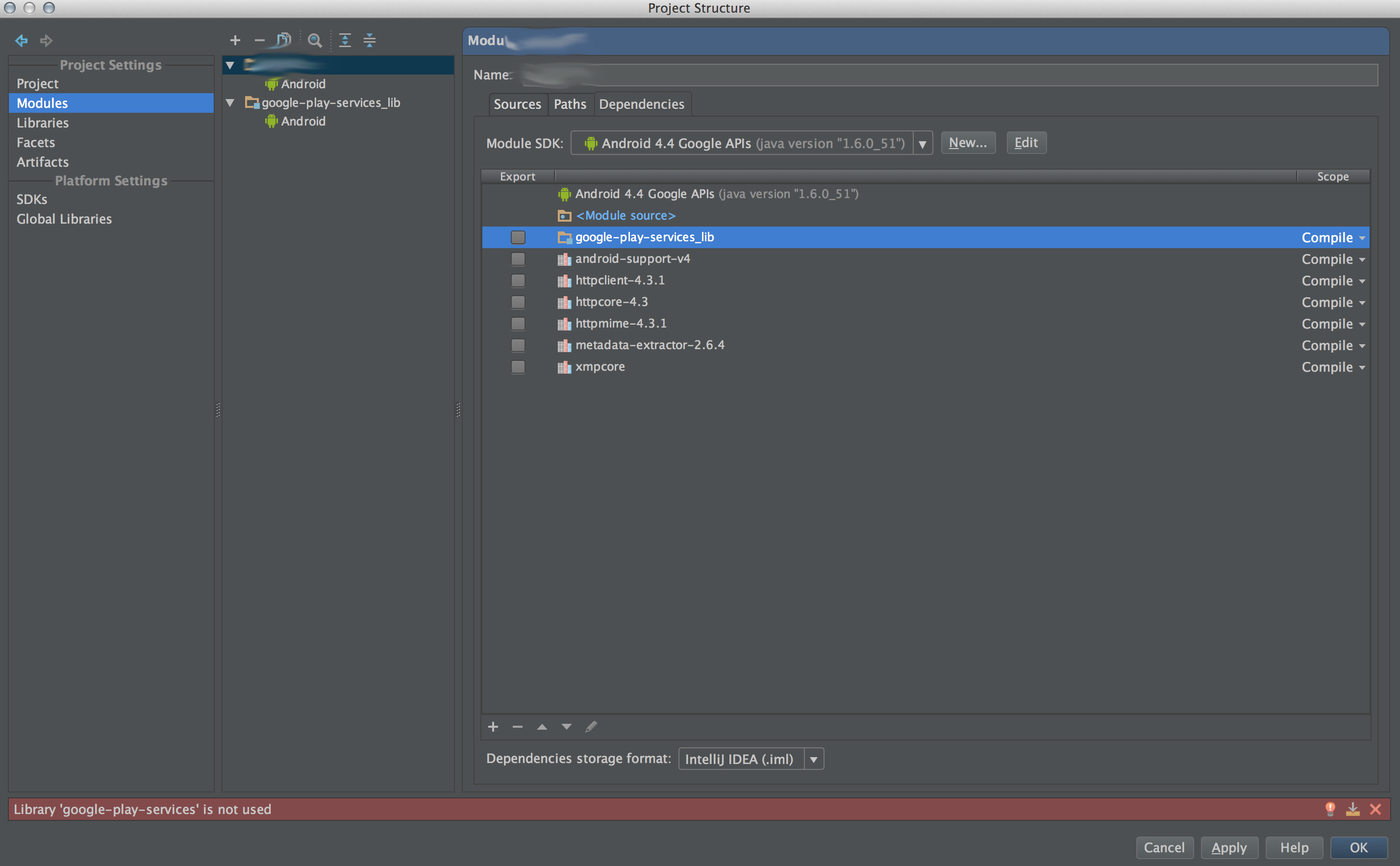 Next I added google-play-services_lib as a module dependency instead of a library dependency. Then I hit the up arrow button at the bottom a couple times to move this dependency to the top of the list. But notice the error at the bottom (we're still not done yet!) 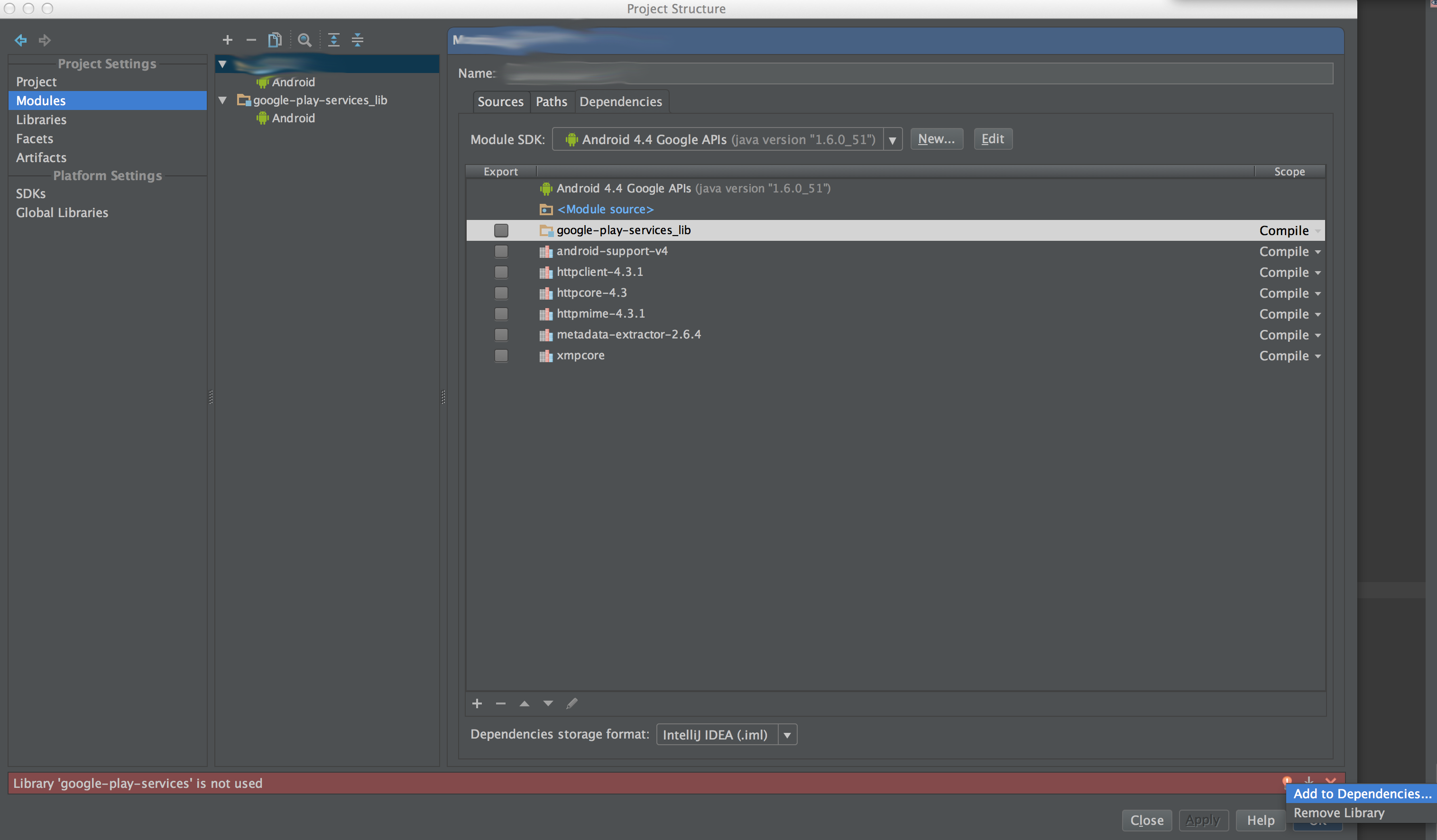 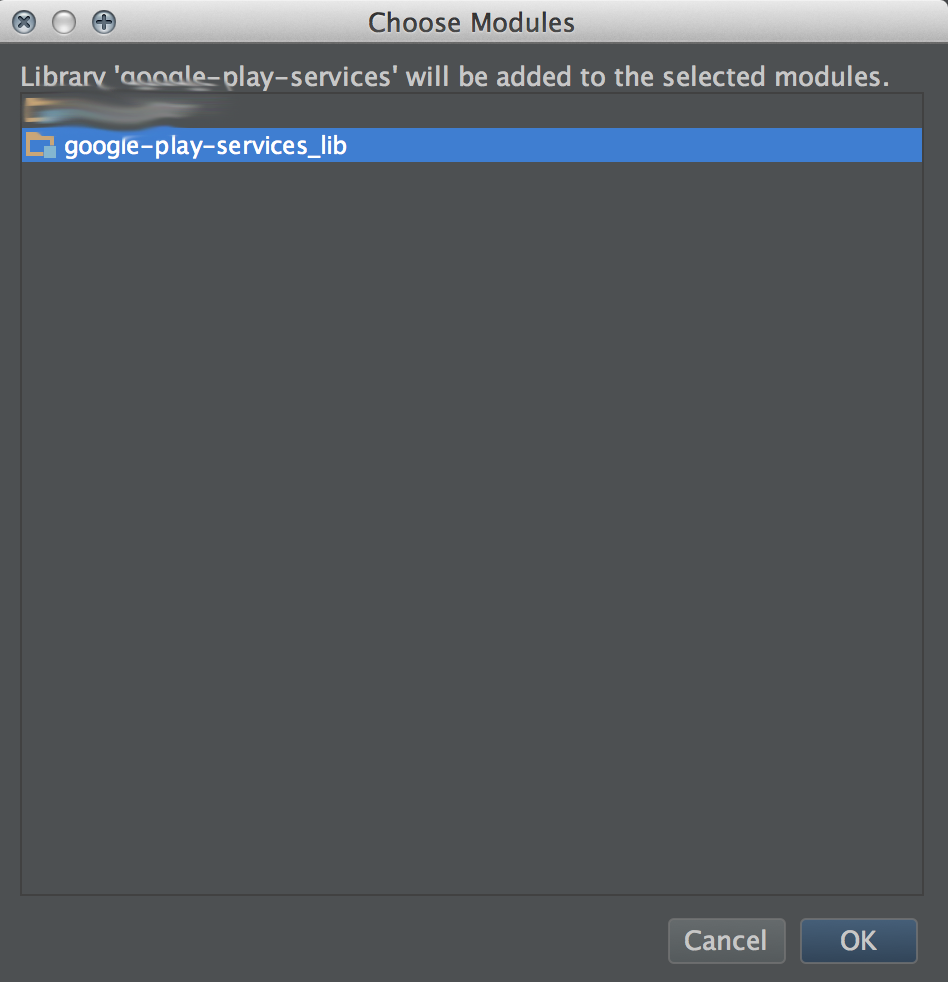 And finally, you're done! I hope this helps someone else out there!

I believe the reason that this issue was happening to begin with is because I thought that I had properly included the entire google-play-services_lib project into my overall project... but I actually had not, and had instead only properly included its jar file (google-play-services_lib/libs/google-play-services.jar). That jar file only includes code, not Android resources values, and so as such the @integer/google_play_services_version value was never really in my project. But the code was able to be used in my project, and so that made it seem like everything was fine.

And as a side note, fixing this issue also seems to have fixed the GooglePlayServicesUtil.getErrorDialog(...).show() crash that I used to have. But that could also have been fixed by the update, not really 100% sure there.

I faced the same issue, and apparently Eclipse somehow left the version.xml file in /res/values from the original google-play-services_lib project while making a copy. I pulled the file from original project and pasted it in my copy of the project and the problem is fixed.

On Eclipse, after importing the google play library to the project workspace I just copied the version.xml file from

To anyone using gradle: don't include the project source, but instead download it using SDK Manager and add this line to dependencies:

I also ran across this while trying to use google_play_services_froyo.

I filed this bug: https://code.google.com/p/google-plus-platform/issues/detail?id=734

after the update to the last versión i had this problem with all my projects, but it was solved just adding again the library reference:

if you don´t have the library into your workspace in Eclipse you can add it with: File -> Import -> Existing Android Code Into Workspace -> browse and navigate to google-play-services_lib project lib, (android-sdk/extras/google/google_play_services/libproject). 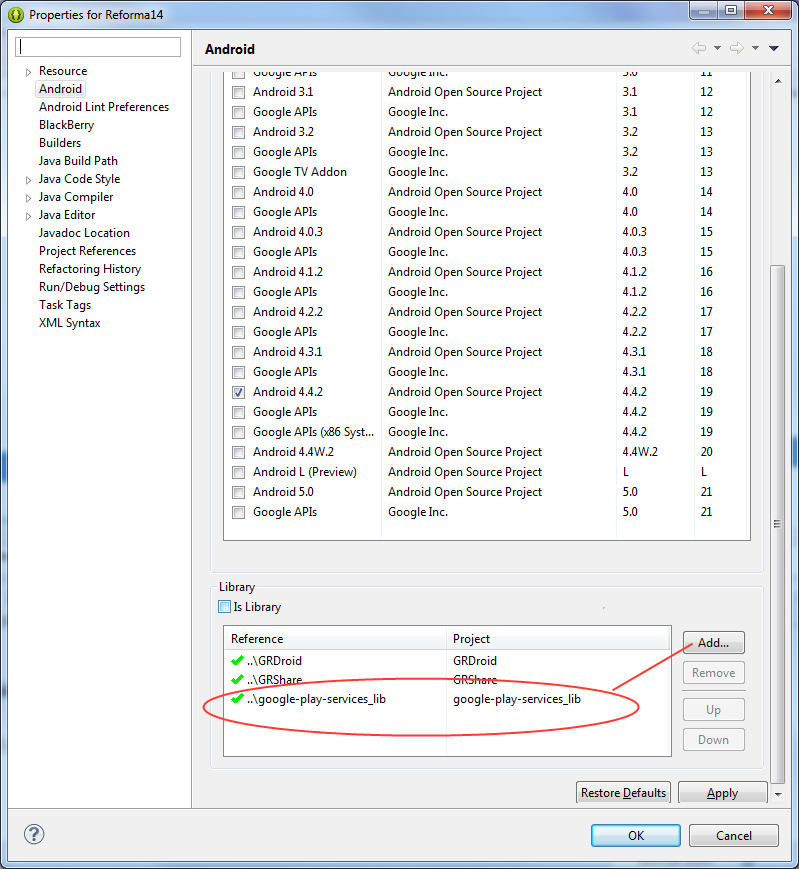 then deleting /bin and /gen folders of my project (something similar to the clean option) and building my project again.

But since most of the answers here are for Eclipse, here is a brief summary for upgrading Play Services with Android Studio

You can find the version number for the version of play-services that you have downloaded on your development machine by looking in your \sdk\extras\google\m2repository\com\google\android\gms\play-services folder, as explained here: How do I match a Google Play Services revision with an install version?

For Eclipse, I just added project reference to the google-play-services_lib in:

I had same issue, the version.xml file was not in google-play-services_lib. Just start you sdk manager and accept the update especially the things related to "extras".

While importing the google-play-services_lib, check the version code defined in AndroidManifest.xml and version.xml. I had found the difference in version code and change it to 4242000. After making the change there is no more compilation error in @integer/google_play_services_version. 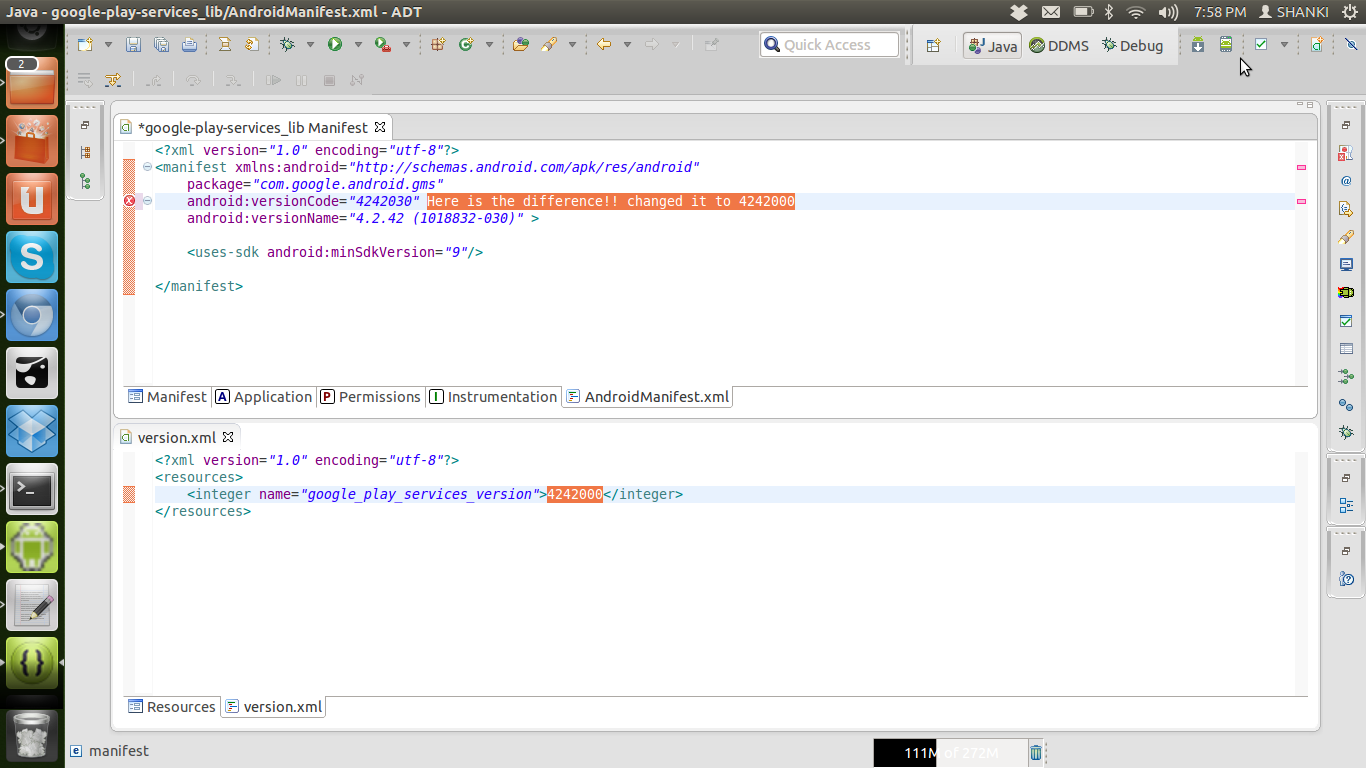 Below are the main actions which will avoid a lot of errors when using Google play service Lib:

I had the same issue with a project using Maven and IntelliJ. Google Play services are added as a maven dependency. The maven build worked fine from command line, but IntelliJ complained about this missing symbol @integer/google_play_services_version

In my case I forced an update of the maven POM files and it solved the problem.

In my case, I needed to copy the google-play-services_lib FOLDER in the same DRIVE of the source codes of my apps

When not using an IDE, but using command line builds (using ant and ndk-build), this is how to solve it:

Install all the req'd parts with 'android' command. Then have a copy of google-play-service_lib/ in your project root. Edit project.properties to include this line:

I had the same issue. The issue was that the "google-play-services.jar" was not properly imported into my project even though it was part of the google_play_service_lib project. If you are using Eclipse, please check and see if you can see the play services jar file in the Android Private Libraries section and if this is exported by the library.

The problem for me was that the library project and the project using play services were in different directories. So just:

Google suggests you don't create a project directly from the SDK directory. It's better to copy the lib project out to the location where your app is, then import it from there. Otherwise the next time you go to import the project for another app, it will already be in use.

Note: You should be referencing a copy of the library that you copied to your development workspace—you should not reference the library directly from the Android SDK directory.

File -> Invalidate Caches/Restart and choose invalidate and Restart button in the dialog appeared.

I had the same problem, add this 2 line in your build.gradle the problem will be resolved probably. ;)

Not the answer you're looking for? Browse other questions tagged android google-play-services or ask your own question.