What's the difference between a sequence and a collection in Clojure

I am a Java programmer and am new to Clojure. From different places, I saw sequence and collection are used in different cases. However, I have no idea what the exact difference is between them.

1) In Clojure's documentation for Sequence:

2) There are functions called coll? and seq? that can be used to test if a value is a collection or a sequence. It is clearly collection and sequence are different.

3) In Clojure's documentation about 'Collections', it is said:

Because collections support the seq function, all of the sequence functions can be used with any collection

Does this mean all collections are sequences?

The code above tells me it is not such case because [1 2 3] is a collection but is not a sequence.

I think this is a pretty basic question for Clojure but I am not able to find a place explaining this clearly what their difference is and which one should I use in different cases. Any comment is appreciated.

Any object supporting the core first and rest functions is a sequence.

Many objects satisfy this interface and every Clojure collection provides at least one kind of seq object for walking through its contents using the seq function.

And you can create a sequence object from a map too

That's why you can use filter, map, for, etc. on maps sets and so on.

So you can treat many collection-like objects as sequences.

That's also why many sequence handling functions such as filter call seq on the input:

If you call (filter pred 5)

You see that seq call is the is this object a sequence validation.

Most of this stuff is in Joy of Clojure chapter 5 if you want to go deeper.

Here are few points that will help understand the difference between collection and sequence.

The figure below best describes the relation between them: 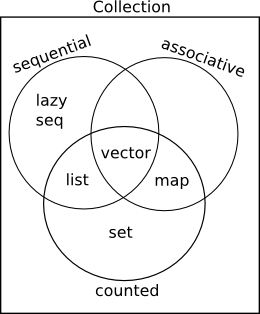 Every sequence is a collection, but not every collection is a sequence.

The seq function makes it possible to convert a collection into a sequence. E.g. for a map you get a list of its entries. That list of entries is different from the map itself, though.

In Clojure for the brave and true the author sums it up in a really understandable way:

The collection abstraction is closely related to the sequence abstraction. All of Clojure's core data structures — vectors, maps, lists and sets — take part in both abstractions.

I have just been through Chapter 5 - "Collection Types" of "The Joy of Clojure", which is a bit confusing (i.e. the next version of that book needs a review). In Chapter 5, on page 86, there is a table which I am not fully happy with:

So here's my take (fully updated after coming back to this after a month of reflection).

It's a "thing", a collection of other things.

This is based on the function coll?.

Things that are collections as grouped into three separate classes. Things in different classes are never equal.

The Java interop stuff is outside of this:

It's a "thing", a collection holding other things according to a specific, stable ordering.

This is based on the function sequential?.

"Clojure classifies each collection data type into one of three logical categories or partitions: sequentials, maps, and sets."

"Joy of Clojure" also has this to say:

Clojure includes a few predicates with names like the words just defined. Although they’re not frequently used, it seems worth mentioning that they may not mean exactly what the definitions here might suggest. For example, every object for which sequential? returns true is a sequential collection, but it returns false for some that are also sequential [better: "that can be considered sequential collections"]. This is because of implementation details that may be improved in a future version of Clojure [and maybe this has already been done?]

This is more a concept than a thing: a series of values (thus ordered) which may or may not exist yet (i.e. a stream). If you say that a thing is a sequence, is that thing also necessarily a Clojure collection, even a sequential collection? I suppose so.

That sequential collection may have been completely computed and be completely available. Or it may be a "machine" to generate values on need (by computation - likely in a "pure" fashion - or by querying external "impure", "oracular" sources: keyboard, databases)

This is a thing: something that can be processed by the functions first, rest, next, cons (and possibly others?), i.e. something that obeys the protocol clojure.lang.ISeq (which is about the same concept as "providing an implementation for an interface" in Java), i.e. the system has registered function implementations for a pair (thing, function-name) [I sure hope I get this right...]

This is based on the function seq?.

Returns the first item in the collection. Calls seq on its argument. If coll is nil, returns nil.

Returns a possibly empty seq of the items after the first. Calls seq on its argument.

Returns a seq of the items after the first. Calls seq on its argument. If there are no more items, returns nil.

You call next on the seq to generate the next element and a new seq. Repeat until nil is obtained.

Joy of Clojure calls this a "simple API for navigating collections" and says "a seq is any object that implements the seq API" - which is correct if "the API" is the ensemble of the "thing" (of a certain type) and the functions which work on that thing. It depends on suitable shift in the concept of API.

A note on the special case of the empty seq:

If you apply the function seq to a thing for which that makes sense (generally a sequential collection), you get a seq representing/generating the members of that collection.

Returns a seq on the collection. If the collection is empty, returns nil. (seq nil) returns nil. seq also works on Strings, native Java arrays (of reference types) and any objects that implement Iterable. Note that seqs cache values, thus seq should not be used on any Iterable whose iterator repeatedly returns the same mutable object.

After applying seq, you may get objects of various actual classes:

What the "elements" in the sequence are depends. For example, for maps, they are key-value pairs which look like 2-element vector (but their actual class is not really a vector).

Creates a thing to generate more things lazily (a suspended machine, a suspended stream, a thunk)

Takes a body of expressions that returns an ISeq or nil, and yields a Seqable object that will invoke the body only the first time seq is called, and will cache the result and return it on all subsequent seq calls. See also - realized?"

In the Clojure Universe, I like to talk about "functions" and "things", but not about "objects", which is a term heavily laden with Java-ness and other badness. Mention of objects feels like shards poking up from the underlying Java universe.

What is the difference between function and thing?

Evidently, functions are things as they are "first-class citizens".

It's also contextual! In some contexts, a function becomes a thing, or a thing becomes a function.

There are nasty mentions of objects ... these are shards poking up from the underlying Java universe.

For presentation purposes, a diagram of Collections 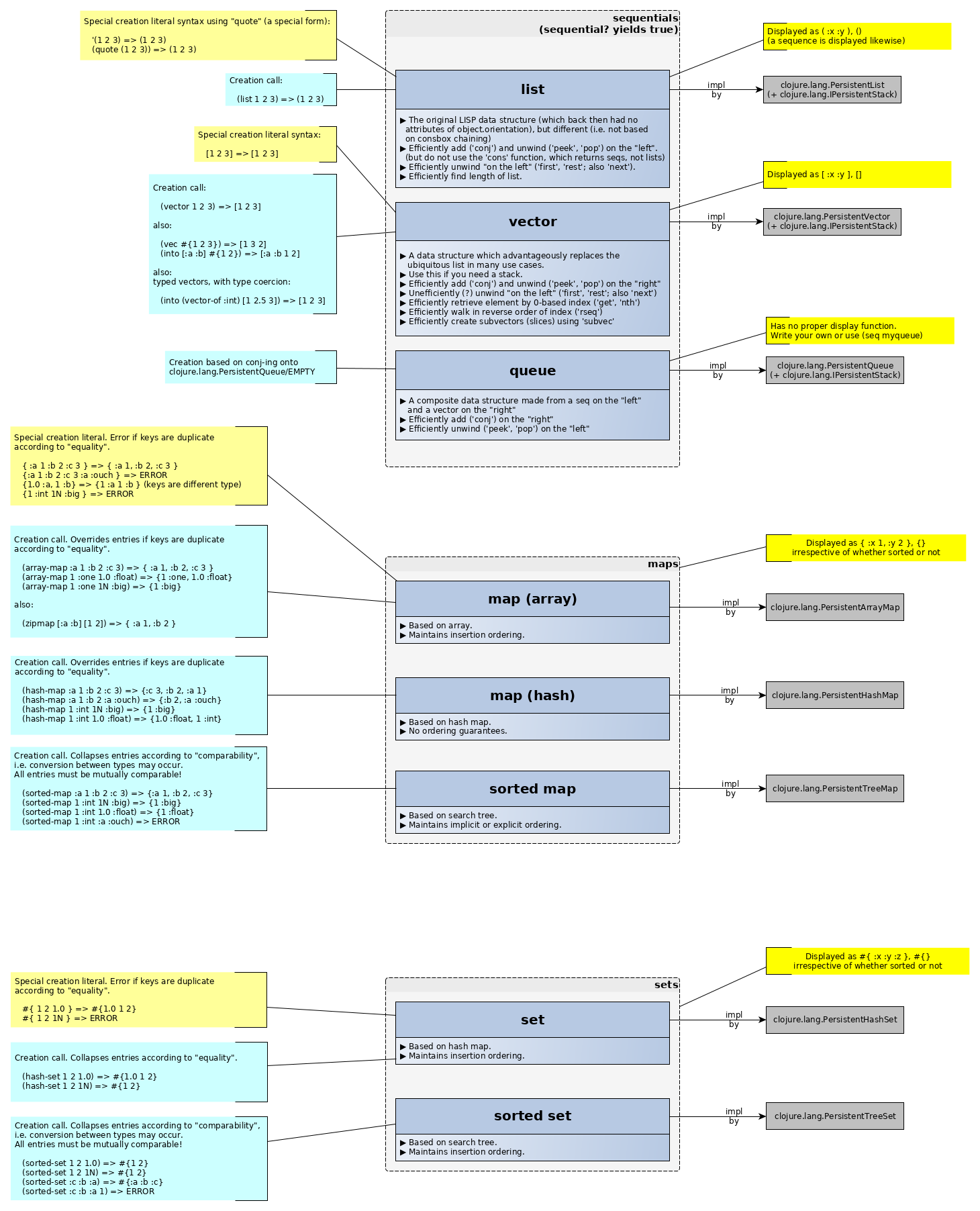 And I found ISeq interface extends from IPersistentCollection in Clojure source code, so as Rörd said, every sequences is a collection.

Not the answer you're looking for? Browse other questions tagged collections clojure abstraction or ask your own question.

25
What is the difference between the functions seq?, sequential? and coll?
8
Differences between a seq and a list
4
Non-map collection predicate?

4100
What are the differences between a HashMap and a Hashtable in Java?
380
Difference between abstraction and encapsulation?
454
LINQ .Any VS .Exists - What's the difference?
36
How can I remove an item from a sequence in Clojure?
103
Clojure: cons (seq) vs. conj (list)
43
Clojure lazy sequence usage
20
Why clojure collections don't implement ISeq interface directly?
2
What's difference between object-like-map and collection-like-map in clojure?
4
Clojure sequences and collections