Is there a way to revert a commit so that my local copy keeps the changes made in that commit, but they become non-committed changes in my working copy? Rolling back a commit takes you to the previous commit - I want to keep the changes made but I committed them to the wrong branch.

This has not been pushed, only committed.

There are a lot of ways to do so, for example:

in case you have not pushed the commit publicly yet:

That's it, your commit changes will be in your working directory, whereas the LAST commit will be removed from your current branch. See git reset man

In case you did push publicly (on a branch called 'master'):

now if you want to have those changes as you local changes in your working copy ("so that your local copy keeps the changes made in that commit") - just revert the revert commit with --no-commit option:

If you pushed the changes, you can undo it and move the files back to stage without using another branch.

It will create a patch file that contain the last branch changes. Then it revert the changes. And finally, apply the patch files to the working tree.

For the case: "This has not been pushed, only committed." - if you use IntelliJ (or another JetBrains IDE) and you haven't pushed changes yet you can do next.

This will "uncommit" your changes and return your git status to the point before your last local commit. You will not lose any changes you made.

Commit hash of the last commit you want to keep.

Here is a modern way to undo your last commit if you are a VSCode user.

All it does is it restores your repository just as it was before you made the commit, with your changes untouched.

With me mostly it happens when I push changes to the wrong branch and realize later. And following works in most of the time.

Checkout on your branch

Check status of the code after aborting the merge

these command will reset your changes and align your code with the branch_name (branch) code.

Adding steps I followed hoping that it's helpful for a beginner like me.

Following picture shows the commits I have already pushed to the remote branch 'A' in bitbucket.

From these 5 commits, I want to keep the last 2 as it is, but the first 3 commits I want them pushed to another branch 'B'.

These are the steps I followed:

After the push, this is how it looked like:- 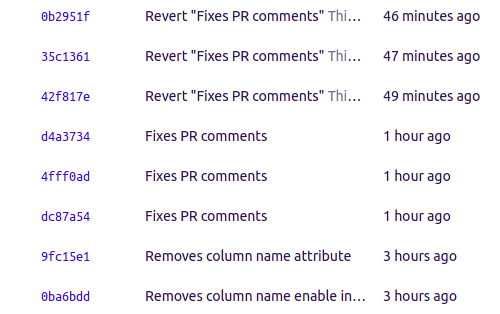 Now, I only have the first 2 commits in my branch 'A', which is what I wanted. Next, checkout to the branch wanted. If it's a new branch, use git checkout -b <branchname>. In my case, I did git checkout B.

I simply cherry-picked the commits I wanted to branch 'B'. In my case I did:

for those 3 commits I reverted.

(Again, as an example, git cherry-pick d4a3734 where d4a3734 is the commit hash of the last commit in the picture)

1
How do I undo the last git commit while preserving changes?
1395
How can I revert multiple Git commits?
747
In plain English, what does "git reset" do?
236
How do I push to GitHub under a different username?
9
git stash `No local changes` but git status `ahead of origin/master by 3 commits`