bootstrap 3 accordion collapse does not work on iphone

These "accordion submenus" work in chrome and firefox, but not on an iphone.

I have built a site which includes an "offcanvas" navigation menu on smaller screens. The user clicks "the hot dog button", and the navigation menu slides onto the screen from the left... that works great so far.

Some of the navigation elements contain submenus. For those, I used bootstrap's accordion markup. The user clicks an arrow, and the "submenu" expands. 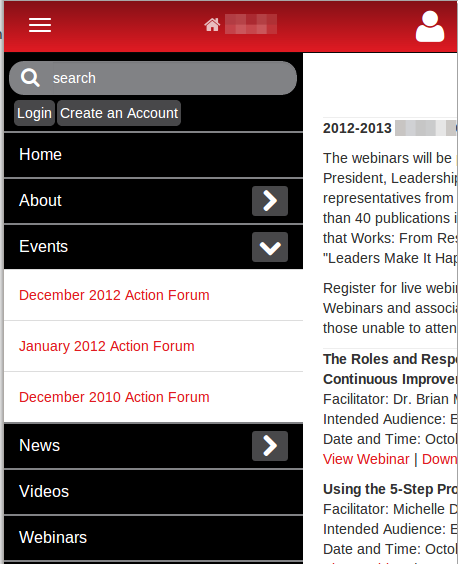 I develop using chrome on linux. This mechanism works perfectly in chrome, firefox, and every browser I can get my hands on, as well as on my personal android phone. It also works on responsinator.com. However, since I don't have Safari, nor an iPhone, I have not been able to test this functionality directly on an iphone. I am working on getting an iPhone emulator...

Until then, some other people have looked at this on an iPhone, and I am told the "submenus" do not work at all. When the user clicks the arrow, nothing happens...

Here is an excerpt of a "menu item" containing a "sub-menu": please note I am using the 'data-toggle' and 'data-target' attributes:

I really don't know what to try next: Similar questions have ended with "a css conflict" or iphone problems regarding .click(), but I am not using that: I am using data-toggle/data-target. I am considering abandoning the 'data-target' markup in favor of manually invoking an on('click', ... ) event, but I would rather not...

By the way, I call this at the bottom of my page if that's relevant:

Does anyone have any other clues? Any recent direct experience with an issue like this?

Thanks in advance for your help.

So I think I figured this out: my original markup relied solely on the data-target element, but that is apparently not enough. Safari (on iPhone) seems to also need the href attribute (which really should be there on an <a> anyway. So this works:

But this does not:

For me, collapse would work on desktop and iphone, but some of my collapses were not working on ipads. It turned out that perfect solution for me was given by @Loris in @Ryan's answer, to add the pointer style to any collapsable trigger (e.g., a div acting as a button). I generalized this to the following CSS:

looking at this, I had the same problem, however, when you add a href="#collapse1", it jumps you to the top of the page. I fixed this by wrapping the element in a button and removed the css for buttons. So, your code would be:

You can fix this by simply adding this attribute to the div that triggers the dropdown.

This is working for me :

To make this work for any element type, such as a div, you can use the following jQuery method (tested ios 8):

I did this in my application:

And it fixed the problem.

In the MDN documentation says this:

"Safari Mobile 7.0+ (and likely earlier versions too) suffers from a bug where click events aren't fired on elements that aren't typically interactive (e.g. ) and which also don't have event listeners directly attached to the elements themselves (i.e. event delegation is being used). See this live example for a demonstration. See also Safari's docs on making elements clickable and the definition of 'clickable element'"

Enabling the animation will cause some problems in IOS devices. Disable it and it will work. That was the case for me.

Not the answer you're looking for? Browse other questions tagged javascript jquery ios css twitter-bootstrap or ask your own question.

169
How to make a Bootstrap accordion collapse when clicking the header div?
1
Content not showing on mobile device
0
How to create a collapse table by using Angualrjs
1
Bootstrap accordian not working on iOS

2112
How does JavaScript .prototype work?
1405
How does the "this" keyword work?
2002
How does data binding work in AngularJS?
1346
How does Access-Control-Allow-Origin header work?
2868
Why does my JavaScript code receive a "No 'Access-Control-Allow-Origin' header is present on the requested resource" error, while Postman does not?
0
Bootstrap Accordion/Collapse hybrid?
0
Bootstrap Collapse not working with Ajax created content