What is the difference between call and apply?

Are there performance differences between the two aforementioned methods? When is it best to use call over apply and vice versa?

The difference is that apply lets you invoke the function with arguments as an array; call requires the parameters be listed explicitly. A useful mnemonic is "A for array and C for comma."

There is also, as of ES6, the possibility to spread the array for use with the call function, you can see the compatibilities here.

K. Scott Allen has a nice writeup on the matter.

Basically, they differ on how they handle function arguments.

The apply() method is identical to call(), except apply() requires an array as the second parameter. The array represents the arguments for the target method."

To answer the part about when to use each function, use apply if you don't know the number of arguments you will be passing, or if they are already in an array or array-like object (like the arguments object to forward your own arguments. Use call otherwise, since there's no need to wrap the arguments in an array.

When I'm not passing any arguments (like your example), I prefer call since I'm calling the function. apply would imply you are applying the function to the (non-existent) arguments.

There shouldn't be any performance differences, except maybe if you use apply and wrap the arguments in an array (e.g. f.apply(thisObject, [a, b, c]) instead of f.call(thisObject, a, b, c)). I haven't tested it, so there could be differences, but it would be very browser specific. It's likely that call is faster if you don't already have the arguments in an array and apply is faster if you do.

Here's a good mnemonic. Apply uses Arrays and Always takes one or two Arguments. When you use Call you have to Count the number of arguments.

While this is an old topic, I just wanted to point out that .call is slightly faster than .apply. I can't tell you exactly why.

Douglas Crockford mentions briefly the difference between the two, which may help explain the performance difference... http://youtu.be/ya4UHuXNygM?t=15m52s

Follows an extract from Closure: The Definitive Guide by Michael Bolin. It might look a bit lengthy, but it's saturated with a lot of insight. From "Appendix B. Frequently Misunderstood JavaScript Concepts":

What this Refers to When a Function is Called

When calling a function of the form foo.bar.baz(), the object foo.bar is referred to as the receiver. When the function is called, it is the receiver that is used as the value for this:

If there is no explicit receiver when a function is called, then the global object becomes the receiver. As explained in "goog.global" on page 47, window is the global object when JavaScript is executed in a web browser. This leads to some surprising behavior:

Even though obj.addValues and f refer to the same function, they behave differently when called because the value of the receiver is different in each call. For this reason, when calling a function that refers to this, it is important to ensure that this will have the correct value when it is called. To be clear, if this were not referenced in the function body, then the behavior of f(20) and obj.addValues(20) would be the same.

Because functions are first-class objects in JavaScript, they can have their own methods. All functions have the methods call() and apply() which make it possible to redefine the receiver (i.e., the object that this refers to) when calling the function. The method signatures are as follows:

Note that the only difference between call() and apply() is that call() receives the function parameters as individual arguments, whereas apply() receives them as a single array:

The following calls are equivalent, as f and obj.addValues refer to the same function:

However, since neither call() nor apply() uses the value of its own receiver to substitute for the receiver argument when it is unspecified, the following will not work:

It may be helpful to think of a function as having no knowledge of the variable to which it is assigned. This helps reinforce the idea that the value of this will be bound when the function is called rather than when it is defined.

It is useful at times for one object to borrow the function of another object, meaning that the borrowing object simply executes the lent function as if it were its own.

These methods are very useful for giving objects temporary functionality.

Another example with Call, Apply and Bind. The difference between Call and Apply is evident, but Bind works like this:

I'd like to show an example, where the 'valueForThis' argument is used:

and apply() takes an array of arguments, ex:

From the MDN docs on Function.prototype.apply() :

The apply() method calls a function with a given this value and arguments provided as an array (or an array-like object).

From the MDN docs on Function.prototype.call() :

The call() method calls a function with a given this value and arguments provided individually.

The apply() method is identical to call(), except apply() requires an array as the second parameter. The array represents the arguments for the target method.

Fundamental difference is that call() accepts an argument list, while apply() accepts a single array of arguments.

Why would I need to use these functions?

We can differentiate call and apply methods as below

CALL : A function with argument provide individually. If you know the arguments to be passed or there are no argument to pass you can use call.

APPLY : Call a function with argument provided as an array. You can use apply if you don't know how many argument are going to pass to the function.

There is a advantage of using apply over call, we don't need to change the number of argument only we can change a array that is passed.

There is not big difference in performance. But we can say call is bit faster as compare to apply because an array need to evaluate in apply method.

The main difference is, using call, we can change the scope and pass arguments as normal, but apply lets you call it using arguments as an Array (pass them as an array). But in terms of what they to do in your code, they are pretty similar.

While the syntax of this function is almost identical to that of apply(), the fundamental difference is that call() accepts an argument list, while apply() accepts a single array of arguments.

So as you see, there is not a big difference, but still, there are cases we prefer using call() or apply(). For example, look at the code below, which finding the smallest and largest number in an array from MDN, using the apply method:

So the main difference is just the way we passing the arguments:

Difference between these to methods are, how you want to pass the parameters.

“A for array and C for comma” is a handy mnemonic.

Call and apply both are used to force the this value when a function is executed. The only difference is that call takes n+1 arguments where 1 is this and 'n' arguments. apply takes only two arguments, one is this the other is argument array.

The advantage I see in apply over call is that we can easily delegate a function call to other function without much effort;

Observe how easily we delegated hello to sayHello using apply, but with call this is very difficult to achieve.

Even though call and apply achive the same thing, I think there is atleast one place where you cannot use call but can only use apply. That is when you want to support inheritance and want to call the constructor.

Here is a function allows you to create classes which also supports creating classes by extending other classes.

Let me add a little detail to this.

these two calls are almost equivalent:

There’s only a minor difference:

And for objects that are both iterable and array-like, like a real array, we technically could use any of them, but apply will probably be faster because most JavaScript engines internally optimize it better.

The call() method calls a function with a given this value and a second parameter which are arguments separated by comma.

The apply() method is the same as call except the fact that the second argument it takes is an array of arguments .

I just want to add a simple example to a well explained post by flatline, which makes it easy to understand for beginners.

The call() method calls a function with a given this value and arguments provided individually. 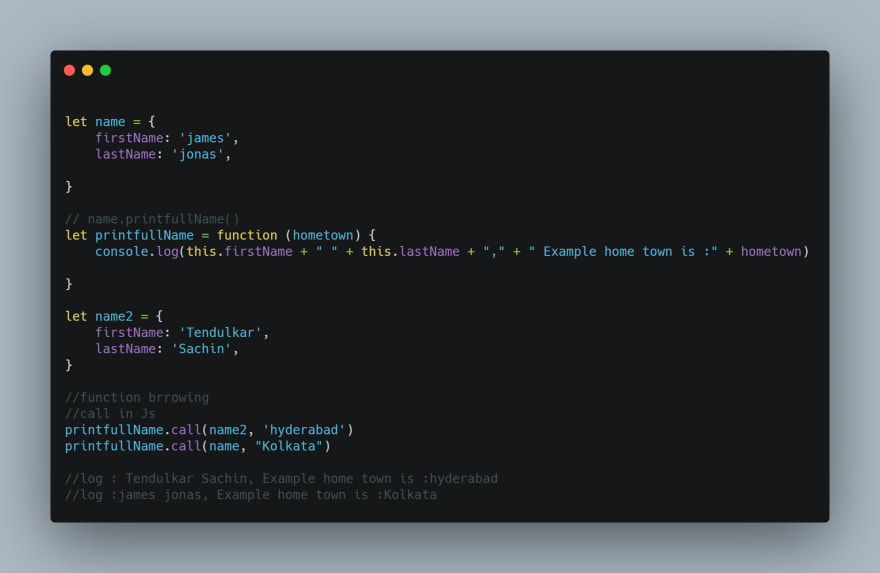 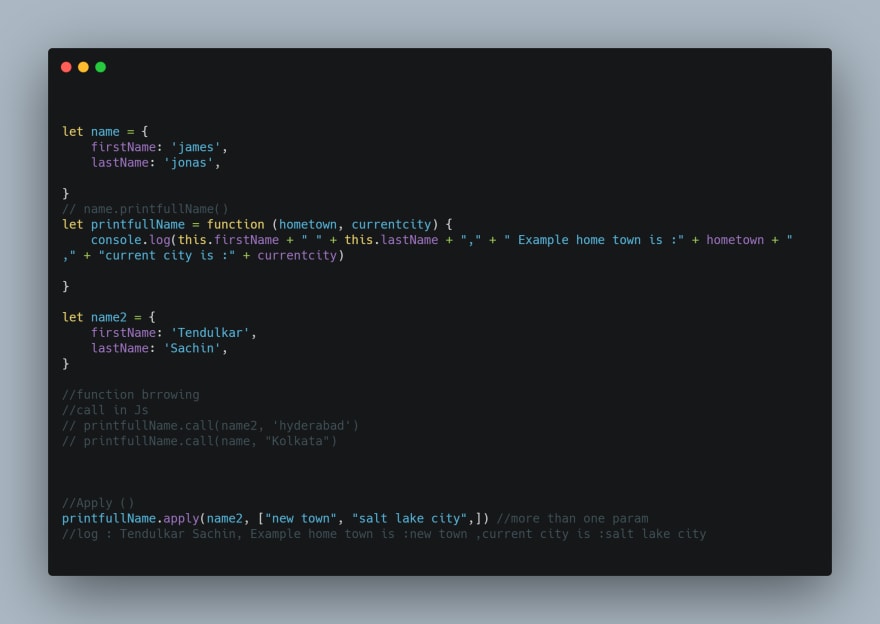 Not the answer you're looking for? Browse other questions tagged javascript performance function dynamic or ask your own question.

29
Pass unknown number of parameters to JS function
6
please explain the apply and call methods in javascript
14
Using apply() vs call(), which one to use in this case?
6
why `splice.apply(arguments, 0)` fails while `splice.call(arguments, 0)` returns Array
4
what is the difference between .apply and .call
2
Difference between .call and .apply
4
Function receives only first element of String array
-3
What is the difference between call and apply method in jQuery
-3
what exactly is "call"/"apply" doing here?
-1
in javascript ,apart from parameter passing in call and apply is there is any other difference where only call will work and apply can not?
See more linked questions