When I run Genymotion, I get the following error:

Unable to configure the network adapter for the virtual device.

How can I fix that?

Update: Before you read further, I want to notice that I didn't have any problems since I upgraded VirtualBox to 4.3.4.

These are the steps I followed to fix this, although I'm not sure which one works for you.

If you don't have any adapter defined, then you can create one (as indicated below) or you can ignore step 1 and Genymotion will create it when you try to start the VM.

If you do have an adapter there (vboxnet0) click the edit button. In the edit window, you must have DHCP server enabled AND the IP address and allocation pool of the server must be inside same network as the IP of the network controller. For example, I use:

Still in VirtualBox, select the Android VM you have, click Settings button, select Network section. In the Adapter 1 tab, you should have:

Normally, if you have all these settings, it should work ok, but it didn't for me. So I moved to step 2.

Start your VM in Genymotion. Genymotion will recreate the adapter with proper settings (as described in step 1)

Step 3. Delete and recreate the Android VM in Genymotion (VirtualBox host-only network settings I left as described in step 1).

Update: A day after posting answer, when I was first starting a VM in genymotion, it gave again same error again and vboxnetdhcp process crashed (and restarted). On second and later start attempts it worked ok. So it might still be some minor issue there with VirtualBox DHCP process.

Update: The issue seems to reside in virtual Box DHCP server which crashes:

Deleting and recreating the VM fixed again the issue. Maybe Genymotion sends some invalid data to VBox DHCP that makes it crash (still a VBox bug though).

If as me you've tried everything above (especially windows 10 users ) and nothing helped here is what eventually solved the issue. The solution was ridiculously easy but took a day to figure it out.

See full video here to see above all step and work well with genemotion.

I had exactly the same problem as you, tried everything, but the solution is really easy:

I was struggling with this for a while and finally found a solution on Windows 10.

In my case, the only option was to remove the VM and download it again. No re-configuration of the host-only adapter did not help, I used different addressing of DHCP. Virtual Box I updated to version 4.3.4 and Genymotion to 2.0.2

I'm running OSX. The solutions suggested didn't work for me. I'm using OSX Yosemite. I restarted my Mac then I uninstalled VirtualBox by launching the uninstall script (which is shown when you launch the dmg of VirtualBox) then reinstalled it. I also uninstalled and reinstalled Genymotion. Now everything is working smooth.

I had the same problem and tired all the above solutions and did not work for me! the problem was because multiple networks make conflict between VMware and VirtualBox, and other VPN connections. The solution i followed is:

uninstall virtualbox and reinstall the last update of it

If solution 1 not working, try this uninstalling all VPN programs, VirtualBox, Genymotion and reinstalled VirtualBox and Genymotion again. both solutions worked with me

I know this post is old, but in case someone is searching google i think i should mention what fixed my problem. After the 3 steps from above the error message was gone but the screen still stayed black and opening an .apk got stuck on file transfer. It had something to do with a VPN application (in my case Hamachi). I just closed it and then the emulator ran fine. This post prompted me to do so: https://groups.google.com/forum/#!searchin/genymotion-users/network/genymotion-users/QAX_UrAzEn0/o947IXpsDuIJ

Firewall might be the cause, just try disabling it In my case it was due to the firewall. I tried all these suggestions in the answers and none of them worked for me. Finally I disabled the firewall It worked for me.

For windows users: Disable Hyper-V and its tools

If you are a windows user, the problem might simply be because of having multiple virtualization technologies in your system.

You might be having Hyper-V and its related features enabled. Just simply turning them off and rebooting your system can do you help sometimes. 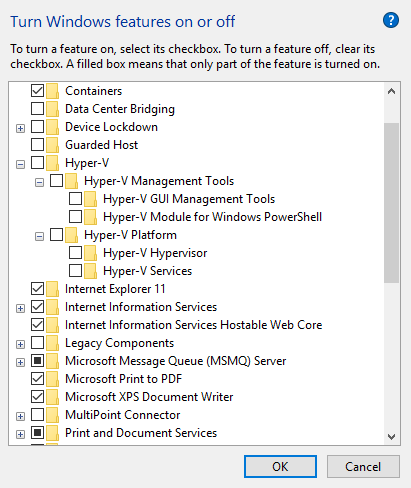 Here is how you do it:

This problem occured for me one time when I had already opened the built-in Android Emulator (AVD). Check if you turned off it before start changing anything in settings.

For VIrtual Box 5.x - the settings from above comments are set automatically

Now for the error:

1.Make sure that you have enough Processor(s) and Base Memory - so the PC can support VM configuration(I use 1 procesor and 1024MB for all VM's)

2.Delete any unused VM from Genymotion and Oracle VirtualBox Manager - seems to reserve their configuration, though you use it or not(that specific VM)

I had a same kind of issue starting Genymotion on Ubuntu 16.04 and solved it in this way https://medium.com/@avanvitharana/genymotion-on-ubuntu-16-04-cb8ef8fc70e9#.6y0bgmmjb

it worked for me when I start Gennymotion in Admin mode

Also make sure to update your Oracle VM Virtual Box. I tried everything but later realized that the issue was due to the use of older version of Virtual Box.

The number of CPUs is insufficient. Select 1 CPU in Genymotion and restart the device. 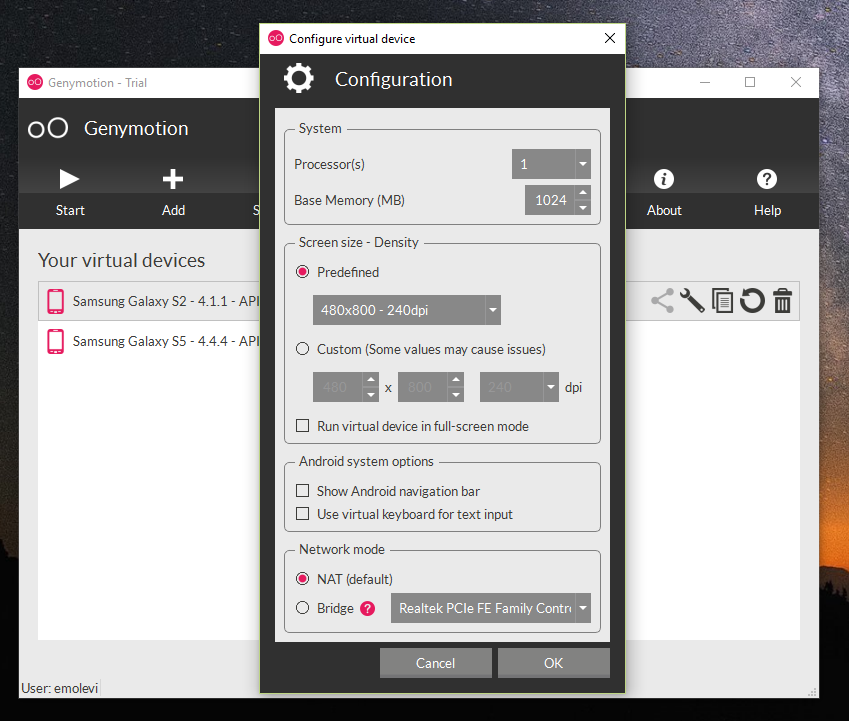 These works for me.

You should run Genymotion as root under Linux:

I have installed Genymotion as a regular user, and got the same nasty VM complaints of not being able to initialize KVM cause it's being taken by some other application. The solution was to start Genymotion by the root user, remember: you'll have to download all the smartphone images once again.

This made both Genymotion and Xamarin Android Player work again.

Not the answer you're looking for? Browse other questions tagged android virtualbox genymotion or ask your own question.