I have looked through many web pages on the new Git integration in VS 2013 and they do not deal with adding an existing solution to Github. In fact I can't find much on using GitHub instead of Visual Studio Online.

Can anyone tell me how I start from an existing solution and add it to Github using the tools in VS 2013.

OK this worked for me.

That creates a local GIT repository

That creates an empty repository with no Master branch

Your solution is now in GitHub

There is a lot easier way to do this that doesn't even require you to do anything outside Visual Studio.

That's all. Visual Studio github plugin automatically created repository for you and configured everything. Now just click on Home and choose "Changes" tab and finally commit your first commit.

This question has already been answered accurately by Richard210363.

However, I would like to point out that there is another way to do this, and to warn that this alternate approach should be avoided, as it causes problems.

As R0MANARMY stated in a comment to the original question, it is possible to create a repo from the existing solution folder using the git command line or even Git Gui. However, when you do this it adds all the files below that folder to the repo, including build output (bin/ obj/ folders) user options files (.suo, .csproj.user) and numerous other files that may be in your solution folder but that you don't want to include in your repo. One unwanted side effect of this is that after building locally, the build output will show up in your "changes" list.

When you add using "Select File | Add to Source Control" in Visual Studio, it intelligently includes the correct project and solution files, and leaves the other ones out. Also it automatically creates a .gitignore file that helps prevent these unwanted files from being added to the repo in the future.

If you have already created a repo that includes these unwanted files and then add the .gitignore file at a later time, the unwanted files will still remain part of the repo and will need to be removed manually... it's probably easier to delete the repo and start over again by creating the repo the correct way.

Visual Studio should now ask your GitHub credentials and then proceed to upload your solution.

Since I have my Windows account connected to Visual Studio to work with Team Foundation I don't know if it works without an account, Visual Studio will keep track of who commits so if you are not logged in it will probably ask you to first.

Well, I understand this question is Visual Studio GUI related, but maybe the asker can try this trick also. Just giving a different perspective in solving this problem.

I like to use terminal a lot for GIT, so here are the simple steps:

My problem is that when i use https for the remote URL, it doesn't work, so I use http instead. This allows me to publish/sync with GitHub from Team Explorer instantly.

None of the answers were specific to my problem, so here's how I did it.

This is for Visual Studio 2015 and I had already made a repository on Github.com

If you already have your repository URL copy it and then in visual studio:

It's a few less clicks in VS2017, and if the local repo is ahead of the Git clone, click Source control from the pop-up project menu:

This brings up the Team Explorer Changes dialog: 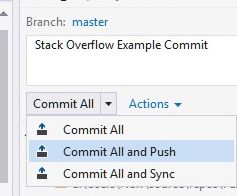 Type in a description- here it's "Stack Overflow Example Commit".
Make a choice of the three options on offer, all of which are explained here.

Here is what worked for me using Visual Studio 2019

7881
How do I remove local (untracked) files from the current Git working tree?
5135
How do I add an empty directory to a Git repository?
7651
How to modify existing, unpushed commit messages?
10863
How do I undo 'git add' before commit?
4084
How do I delete a commit from a branch?
5191
How to determine the URL that a local Git repository was originally cloned from
1772
Download a single folder or directory from a GitHub repo
4552
How do I update or sync a forked repository on GitHub?
3055
How to add images to README.md on GitHub?