Always pass weak reference of self into block in ARC?

I am a little confused about block usage in Objective-C. I currently use ARC and I have quite a lot of blocks in my app, currently always referring to self instead of its weak reference. May that be the cause of these blocks retaining self and keeping it from being dealloced ? The question is, should I always use a weak reference of self in a block ?

A retain cycle is a loop that happens when Object A retains Object B, and Object B retains Object A. In that situation, if either object is released:

Thus, those two objects will just hang around in memory for the life of the program even though they should, if everything were working properly, be deallocated.

So, what we're worried about is retain cycles, and there's nothing about blocks in and of themselves that create these cycles. This isn't a problem, for example:

The block retains self, but self doesn't retain the block. If one or the other is released, no cycle is created and everything gets deallocated as it should.

Because, in a situation like this, self by definition already has a strong reference to the block, it's usually easiest to resolve by making an explicitly weak reference to self for the block to use:

But this should not be the default pattern you follow when dealing with blocks that call self! This should only be used to break what would otherwise be a retain cycle between self and the block. If you were to adopt this pattern everywhere, you'd run the risk of passing a block to something that got executed after self was deallocated.

I totally agree with @jemmons:

But this should not be the default pattern you follow when dealing with blocks that call self! This should only be used to break what would otherwise be a retain cycle between self and the block. If you were to adopt this pattern everywhere, you'd run the risk of passing a block to something that got executed after self was deallocated.

To overcome this problem one can define a strong reference over the weakSelf inside the block:

You don't have to always use a weak reference. If your block is not retained, but executed and then discarded, you can capture self strongly, as it will not create a retain cycle. In some cases, you even want the block to hold the self until the completion of the block so it does not deallocate prematurely. If, however, you capture the block strongly, and inside capture self, it will create a retain cycle.

As Leo points out, the code you added to your question would not suggest a strong reference cycle (a.k.a., retain cycle). One operation-related issue that could cause a strong reference cycle would be if the operation is not getting released. While your code snippet suggests that you have not defined your operation to be concurrent, but if you have, it wouldn't be released if you never posted isFinished, or if you had circular dependencies, or something like that. And if the operation isn't released, the view controller wouldn't be released either. I would suggest adding a breakpoint or NSLog in your operation's dealloc method and confirm that's getting called.

I understand the notion of retain cycles, but I am not quite sure what happens in blocks, so that confuses me a little bit

For more information, see the Avoid Strong Reference Cycles when Capturing self section of the Programming with Objective-C: Working with Blocks document.

If your view controller is still not getting released, you simply have to identify where the unresolved strong reference resides (assuming you confirmed the NSOperation is getting deallocated). A common example is the use of a repeating NSTimer. Or some custom delegate or other object that is erroneously maintaining a strong reference. You can often use Instruments to track down where objects are getting their strong references, e.g.: 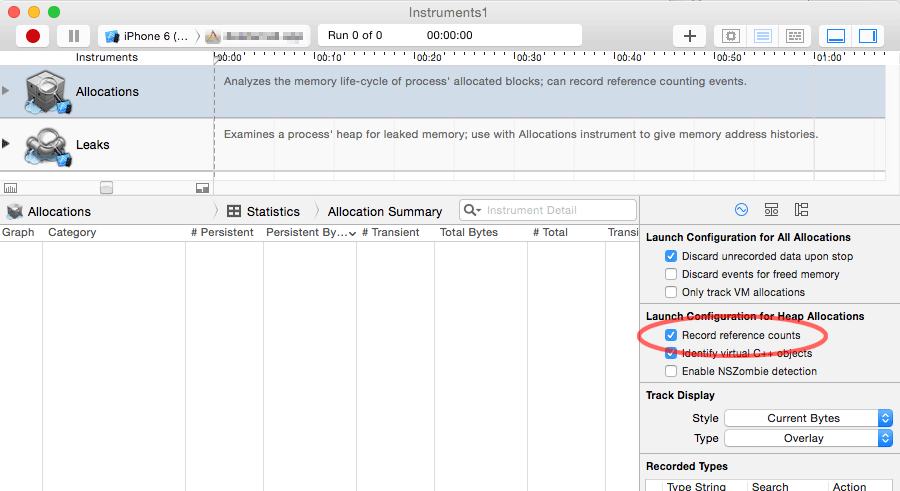 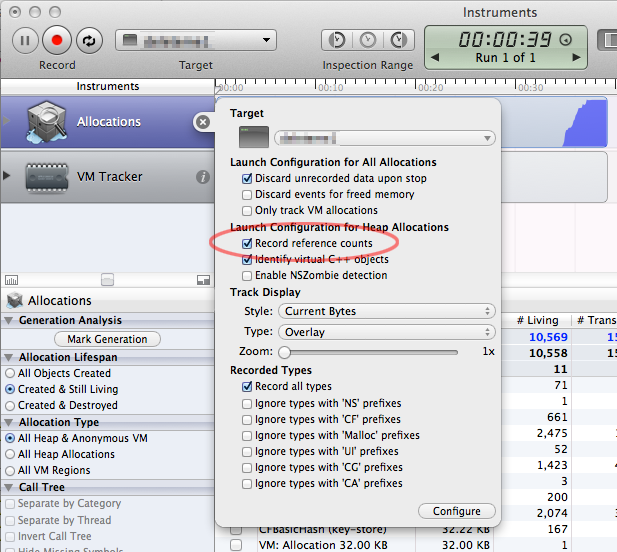 Some explanation ignore a condition about the retain cycle [If a group of objects is connected by a circle of strong relationships, they keep each other alive even if there are no strong references from outside the group.] For more information, read the document

This is how you can use the self inside the block:

//calling of the block

64
UIPageViewController, how do I correctly jump to a specific page without messing up the order specified by the data source?
72
How to debug memory leaks when Leaks instrument does not show them?
42
Is it necessary to use weak references to self always inside blocks..?
29
Do we need to use __weak self inside UIAnimationBlocks in ARC?
13
Convert PHAsset (video) to AVAsset, synchronously
3
Spawn Balls random position out of the screen
6
Is there a way to show warning on not using weak self?
3
Memory leak when making NSURLSession calls and loading images to NSImage
1
presentViewController with delay
2
can't set UIButton title in UITableViewCell with block
See more linked questions

572
Should IBOutlets be strong or weak under ARC?
26
ARC, ivars in Blocks and Reference Cycles via Captured Self
379
Objective-C ARC: strong vs retain and weak vs assign
1
instance variable in iOS before ARC
263
What is the difference between a weak reference and an unowned reference?
502
Shall we always use [unowned self] inside closure in Swift
1
In ARC, dealloc method calls method/block that contains weak reference to self result in weakSelf = nil
0
Is this safe to set property inside a block
2
iOS 8.1 Only Displaying UITextView Intermittently
8
Weak self in closures and consequences example