How do I delete a Git branch locally and remotely?

How do I properly delete the remotes/origin/bugfix branch both locally and remotely?

Note: In most cases, <remote_name> will be origin.

To delete the local branch use one of the following:

As of Git v1.7.0, you can delete a remote branch using

Starting with Git v2.8.0, you can also use git push with the -d option as an alias for --delete. Therefore, the version of Git you have installed will dictate whether you need to use the easier or harder syntax.

From Chapter 3 of Pro Git by Scott Chacon:

Suppose you’re done with a remote branch — say, you and your collaborators are finished with a feature and have merged it into your remote’s main branch (or whatever branch your stable code-line is in). You can delete a remote branch using the rather obtuse syntax git push [remotename] :[branch]. If you want to delete your server-fix branch from the server, you run the following:

Boom. No more branches on your server. You may want to dog-ear this page, because you’ll need that command, and you’ll likely forget the syntax. A way to remember this command is by recalling the git push [remotename] [localbranch]:[remotebranch] syntax that we went over a bit earlier. If you leave off the [localbranch] portion, then you’re basically saying, “Take nothing on my side and make it be [remotebranch].”

I issued git push origin: bugfix and it worked beautifully. Scott Chacon was right—I will want to dog ear that page (or virtually dog ear by answering this on Stack Overflow).

Then you should execute this on other machines

Matthew’s answer is great for removing remote branches and I also appreciate the explanation, but to make a simple distinction between the two commands:

If you want more detailed explanations of the following commands, then see the long answers in the next section.

The long answer: there are three different branches to delete!

When you're dealing with deleting branches both locally and remotely, keep in mind that there are three different branches involved: 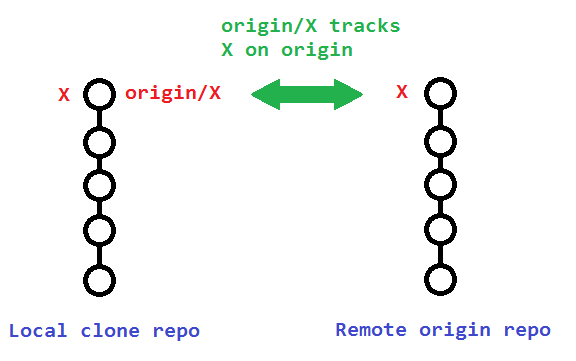 Which only deleted his local remote-tracking branch origin/bugfix, and not the actual remote branch bugfix on origin. 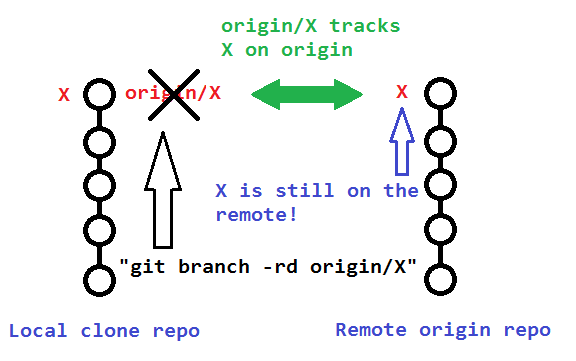 To delete that actual remote branch, you need 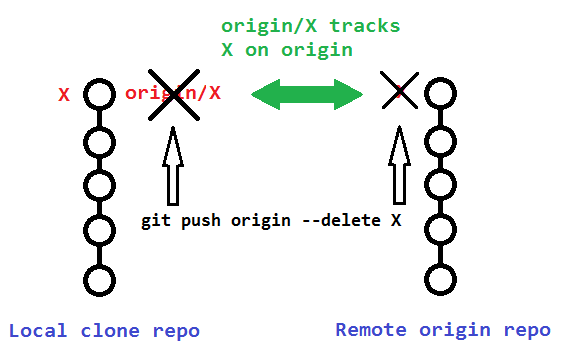 The following sections describe additional details to consider when deleting your remote and remote-tracking branches.

You can verify that the remote-tracking branch origin/X was also deleted by running the following:

If you didn't delete your remote branch X from the command line (like above), then your local repository will still contain (a now obsolete) remote-tracking branch origin/X. This can happen if you deleted a remote branch directly through GitHub's web interface, for example.

Here is the relevant quote from the 1.6.6 release notes (emphasis mine):

Alternative to above automatic pruning for obsolete remote-tracking branches

Alternatively, instead of pruning your obsolete local remote-tracking branches through git fetch -p, you can avoid making the extra network operation by just manually removing the branch(es) with the --remotes or -r flags:

Steps for deleting a branch:

For deleting the remote branch:

For deleting the local branch, you have three ways:

Simply do git push origin --delete to delete your remote branch only, add the name of the branch at the end and this will delete and push it to remote at the same time...

I also create the image below to show the steps: 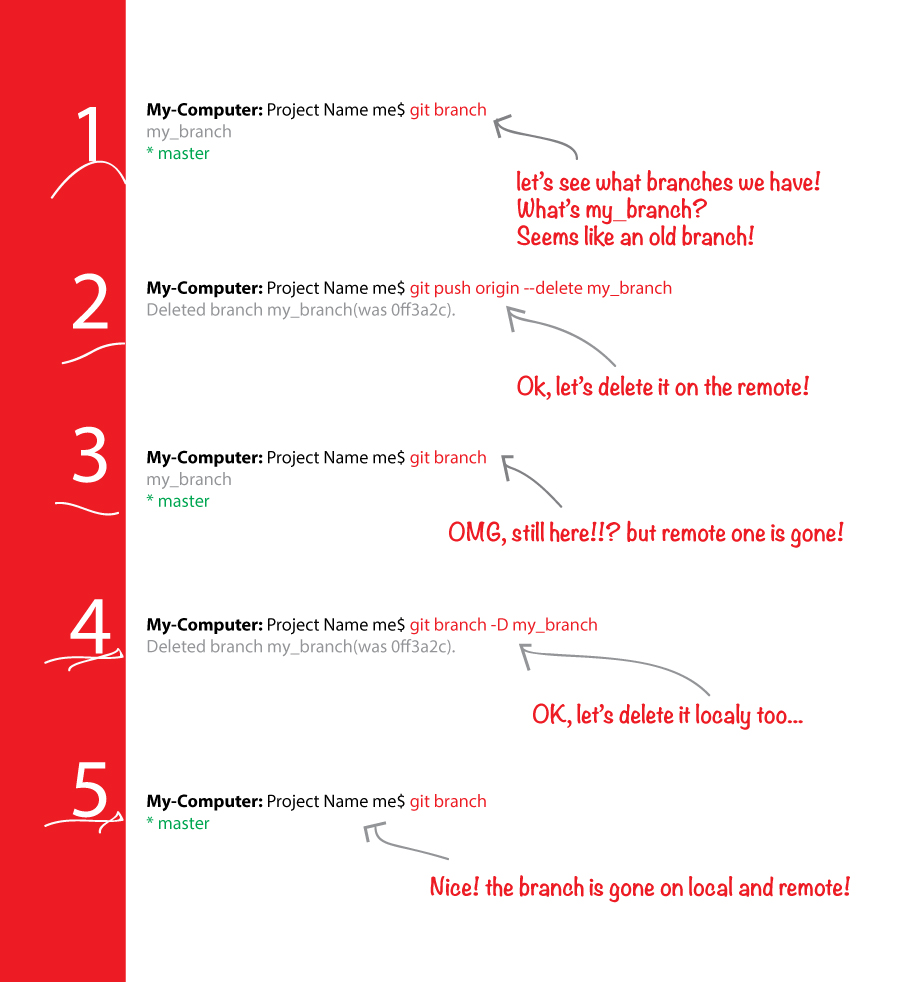 You can also use the following to delete the remote branch

Which does the same thing as

but it may be easier to remember.

To delete the remote branch

-- You can also delete tags with this syntax

Note: do a git fetch --all --prune on other machines after deleting remote branch, to remove obsolete tracking branches.

With the new version of git, its also possible to remove branch with

TIP: if you want to see all available branches you can use git branch -a,

and to see just remote branches, you can use git branch -r

Tip: When you delete branches using

only the references are deleted. Even though the branch is actually removed on the remote, the references to it still exists in the local repositories of your team members. This means that for other team members the deleted branches are still visible when they do a git branch -a.

To solve this, your team members can prune the deleted branches with

If you want to delete a branch, first checkout to the branch other than the branch to be deleted.

This is simple: Just run the following command:

To delete a Git branch both locally and remotely, first delete the local branch using this command:

(Here example is the branch name.)

And after that, delete the remote branch using this command:

WARNING: This will delete all remote branches that do not exist locally. Or more comprehensively,

will effectively make the remote repository look like the local copy of the repository (local heads, remotes and tags are mirrored on remote).

I use the following in my Bash settings:

Then you can call:

To delete a local branch, you can use:

To delete a branch forcibly, use -D instead of -d.

I would suggest you use the second way as it is more intuitive.

If you want to complete both these steps with a single command, you can make an alias for it by adding the below to your ~/.gitconfig:

Alternatively, you can add this to your global configuration from the command line using

NOTE: If using -d (lowercase d), the branch will only be deleted if it has been merged. To force the delete to happen, you will need to use -D (uppercase D).

Since January 2013, GitHub included a Delete branch button next to each branch in your "Branches" page.

To delete your branch locally and remotely

You can also do this using git remote prune origin

It prunes and deletes remote-tracking branches from a git branch -r listing.

In addition to the other answers, I often use the git_remote_branch tool. It's an extra install, but it gets you a convenient way to interact with remote branches. In this case, to delete:

I find that I also use the publish and track commands quite often.

A one-liner command to delete both local, and remote:

Or add the alias below to your ~/.gitconfig. Usage: git kill branch-name

Let's assume our work on branch "contact-form" is done and we've already integrated it into "master". Since we don't need it anymore, we can delete it (locally):

And for deleting the remote branch:

If your branch is in a rebasing/merging progress and that was not done properly, it means you will get an error, Rebase/Merge in progress, so in that case, you won't be able to delete your branch.

So either you need to solve the rebasing/merging. Otherwise, you can do force delete by using,

To delete in remote:

You can do the same using: 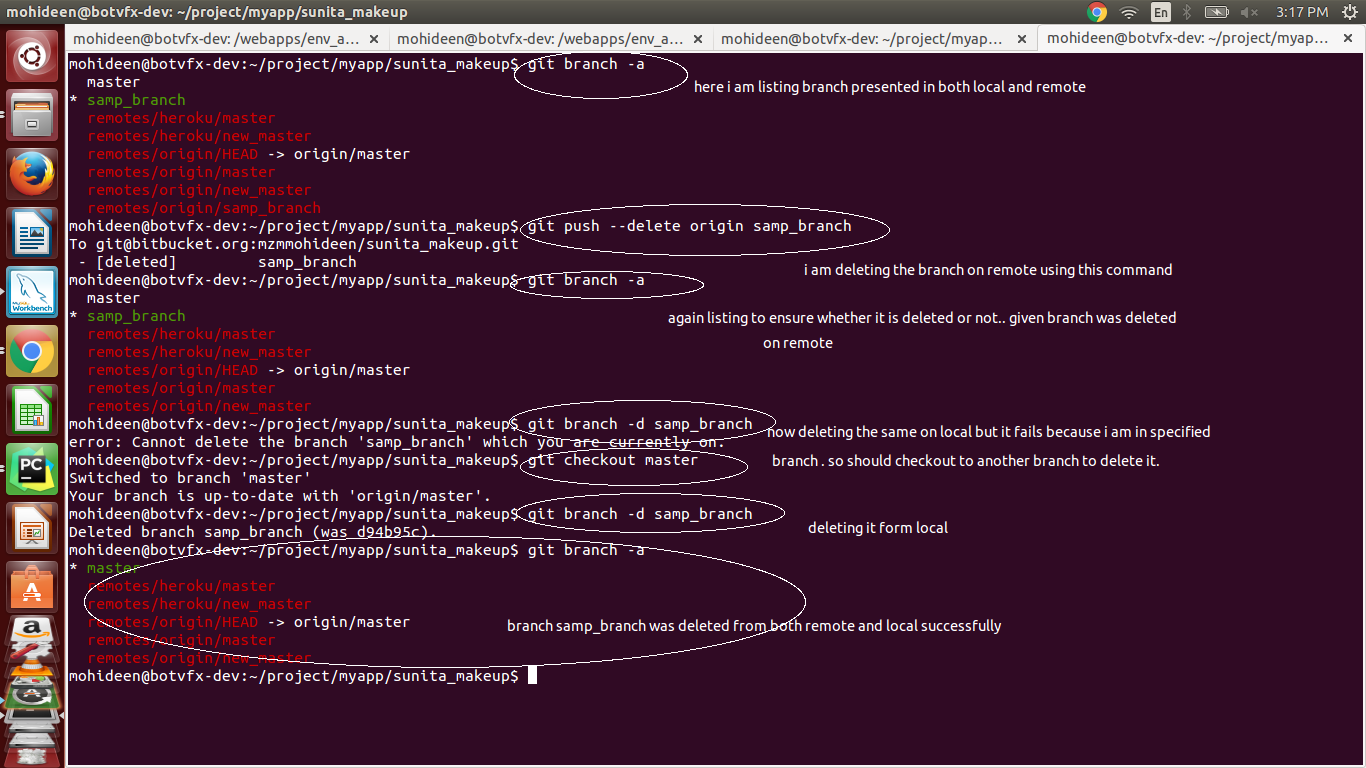 Now you can do it with the GitHub Desktop application.

After launching the application

is easier to remember than

This won't work if you have a tag with the same name as the branch on the remote:

In that case you need to specify that you want to delete the branch, not the tag:

Similarly, to delete the tag instead of the branch you would use:

Many of the other answers will lead to errors/warnings. This approach is relatively fool proof although you may still need git branch -D branch_to_delete if it's not fully merged into some_other_branch, for example.

Remote pruning isn't needed if you deleted the remote branch. It's only used to get the most up-to-date remotes available on a repository you're tracking. I've observed git fetch will add remotes, not remove them. Here's an example of when git remote prune origin will actually do something:

User A does the steps above. User B would run the following commands to see the most up-to-date remote branches:

I got sick of googling for this answer, so I took a similar approach to the answer that crizCraig posted earlier.

I added the following to my Bash profile:

Then every time I'm done with a branch (merged into master, for example) I run the following in my terminal:

...which then deletes my-branch-name from origin as as well as locally.

According to the latest document using a terminal we can delete in the following way.

make sure you determine first what the exact name of the remote branch is by executing:

This will tell you what to enter exactly for <branch> value. (branch is case sensitive!)