When reading a book for business objects, I came across the term- fact table and dimension table.

I am trying to understand what is the different between Dimension table and Fact table?

I read couple of articles on the internet but I was not able to understand clearly..

Any simple example will help me to understand better?

In Data Warehouse Modeling, a star schema and a snowflake schema consists of Fact and Dimension tables. 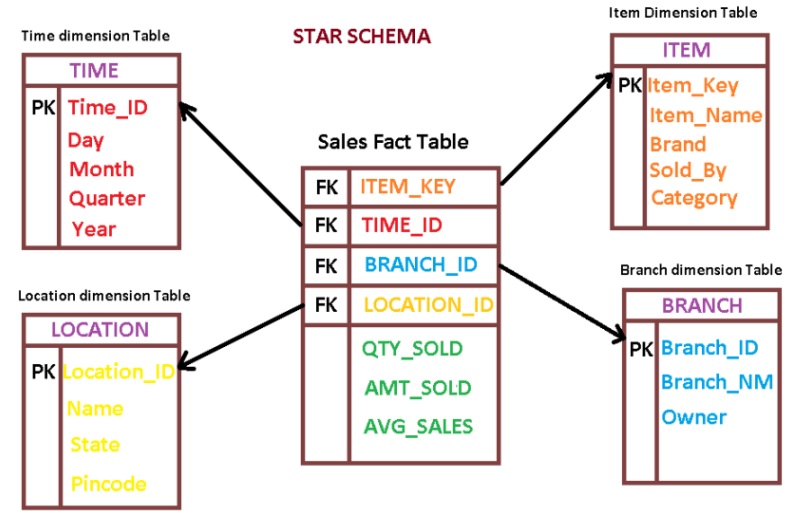 This appears to be a very simple answer on how to differentiate between fact and dimension tables!

Employees sell, customers buy. Employees and customers are examples of dimensions, they do.

Products are sold, they are also dimensions as they have something done to them.

Facts, are the verb. An entry in a fact table marks a discrete event that happens to something from the dimension table. A product sale would be recorded in a fact table. The event of the sale would be noted by what product was sold, which employee sold it, and which customer bought it. Product, Employee, and Customer are all dimensions that describe the event, the sale.

In addition fact tables also typically have some kind of quantitative data. The quantity sold, the price per item, total price, and so on.

This is to answer the part:

I was trying to understand whether dimension tables can be fact table as well or not?

Fact and dimension tables appear in a what is commonly known as a Star Schema. A primary purpose of star schema is to simplify a complex normalized set of tables and consolidate data (possibly from different systems) into one database structure that can be queried in a very efficient way.

On its simplest form, it contains a fact table (Example: StoreSales) and a one or more dimension tables. Each Dimension entry has 0,1 or more fact tables associated with it (Example of dimension tables: Geography, Item, Supplier, Customer, Time, etc.). It would be valid also for the dimension to have a parent, in which case the model is of type "Snow Flake". However, designers attempt to avoid this kind of design since it causes more joins that slow performance. In the example of StoreSales, The Geography dimension could be composed of the columns (GeoID, ContenentName, CountryName, StateProvName, CityName, StartDate, EndDate)

In a Snow Flakes model, you could have 2 normalized tables for Geo information, namely: Content Table, Country Table.

You can find plenty of examples on Star Schema. Also, check this out to see an alternative view on the star schema model Inmon vs. Kimball. Kimbal has a good forum you may also want to check out here: Kimball Forum.

Here the relation is in 4NF

The last example is rather uncommon.

Fact table: a data table that maps lookup IDs together. Is usually one of the main tables central to your application.

Dimension table: a lookup table used to store values (such as city names or states) that are repeated frequently in the fact table.

Dimension table Dimension table is a table which contain attributes of measurements stored in fact tables. This table consists of hierarchies, categories and logic that can be used to traverse in nodes.

Fact table contains the measurement of business processes, and it contains foreign keys for the dimension tables.

Example – If the business process is manufacturing of bricks

In the simplest form, I think a dimension table is something like a 'Master' table - that keeps a list of all 'items', so to say.

From my point of view,

The real interesting thing is deciding whether an attribute should be a dimension or a fact. For example, the price of each item in an order, or, the maximum amount of a insurance recorded in a contract. There are no generally correct way to approach these, only ones that make sense in the context.

PS: If I were to create those jargons I would prefer Log table and Object table.

Fact Table : It is nothing but we can maintains information about the metrics or precalculation data.