I'm using Google Charts to show some data regarding opens and clicks from emails as Pie Charts. I've got the Pie Charts showing the right data, however I'm having issues with the label on the pie chart.

I'm not sure why, but it's mis-aligned - it's decided that the label should not be in the middle of the slice like usual (Left Picture).

Interestingly enough, even though most of the time I've seen it misaligned, I have noticed the text aligns itself correctly a few times for the top slice (mainly when I've just made changes to the code) but then it goes back to being at the edge of the slice after refreshing (Right Picture). 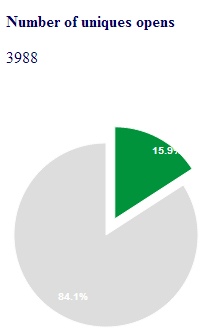 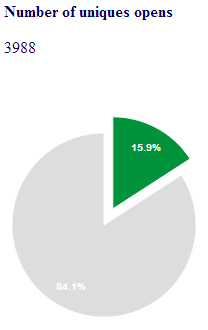 javascript charts google-visualization
Share
Improve this question
edited May 27 '14 at 23:23

This issue was fixed in November 7, 2013, it shouldn't cause more issues.

From the bug report:

Steps to reproduce the problem:

What is the expected behavior?
That element's offsetWidth also returns 32

What went wrong?
offsetWidth is dramatically under the actual value, with offsetWidth of 22 in this case. Off by arbitrary amounts in other cases (e.g. upper-right cell and the one beneath it differ by 1px).

Not the answer you're looking for? Browse other questions tagged javascript charts google-visualization or ask your own question.