Reference could not be added because of same name

Since the update to VS 2013 I have the behaviour that I cannot add a reference to 2 projects with the same name. I did the following:

In the project properties of A the following is entered:

After I added a reference to A.Core in C.ConsoleApp and I try to reference to B.Core to the console I get the error:

The solution was created with VS 2012 and shows this behavior since upgrade. What do I have to setup inside the console?

Edit: I published a screencast on Youtube to explain the problem and placed a bug at Microsoft-Support. I still think, this is a bug. 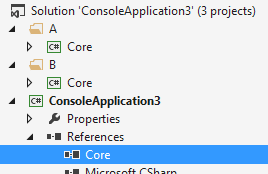 If you look at the project file after adding a reference to A.Core, you'll see this:

Change the Name value to A.Core and you'll be unblocked. (B.Core will still show up as "Core" until you edit it as well.)

Remove the reference to that dll and then reapply it. it worked for me.

Not the answer you're looking for? Browse other questions tagged c# visual-studio visual-studio-2013 .net-4.5 or ask your own question.

1
How to reference two projects with the same name (but different assembly name)?
4
Can't add project reference with same name